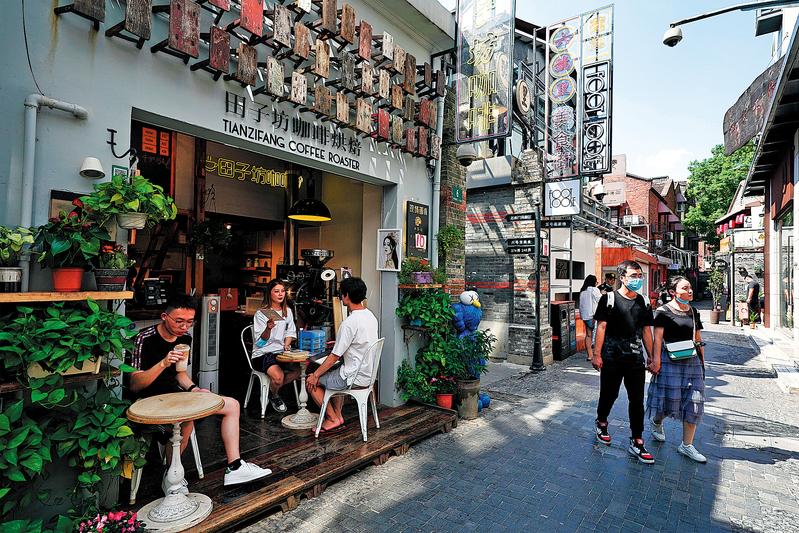 Tianzifang, a popular site in Shanghai with a variety of shops and cafes, is part of the implementation of the smart city "unified management in one network" policy. (GAO ERQIANG / CHINA DAILY)

Shanghai's Tianzifang, a labyrinth of interconnected alleyways that house a variety of shops and cafes, is considered a shining example of heritage conservation.

But the injection of vitality and modernity to the shikumen compound also has brought problems such as structural decline, overcrowding and an overload in electricity consumption.

According to Zhou Jian, director of the management office in Tianzifang, monitoring the conditions of the compound used to be performed primarily by experienced workers. But that changed in 2019 when the management office introduced internet of things applications to aid the workers, allowing them to better detect issues such as overcrowding, building subsidence and potential hazards.

The seven passenger-flow sensors installed at the entrances of the tourist spot had helped the management team to cap the number of visitors at 3,000 during the COVID-19 pandemic.

Eighty percent of the stores in Tianzifang have also installed IoT devices that help with emergencies and issues such as building subsidence and overflowing trash bins. Real-time data is gathered in a "micro AI brain" management system set up by the local government and alerts are sent to relevant parties.

The platform has received over 25,000 alerts since January 2020, according to Lu Haihua, the fire brigade captain for Tianzifang.

"Through the use of technologies, including big data, artificial intelligence and 5G, the system has created a virtual copy of Tianzifang, thus connecting the physical and the virtual worlds," says Rui Heyun, deputy director of smart city engineering center of Shanghai Telecommunication Engineering.

The digital transformation of Tianzifang is part of the implementation of the smart city "unified management in one network" policy that has been reinforced in Shanghai in recent years.

In April 2020, Shanghai's Party Secretary Li Qiang stressed on the development of a more refined city management system to improve urban governance. The Shanghai Development and Reform Commission released 27 policies on Sept 1 for promoting urban digital transformation in Shanghai in five aspects. Companies such as Shanghai Telecommunication Engineering, which has been involved in providing smart city services in parks and schools, have benefited from it.

According to Rui, 14.5 percent of the company's total revenue currently comes from its smart-city business, a surge of 10.9 percentage points compared to three years ago. "It's the business module with the highest growth rate."

But while the introduction of technology has made maintenance work in Tianzifang easier, it has also created challenges of its own.

For example, the Huangpu district government had previously installed 100 inclinometers, to measure angles of slope, in Tianzifang to prevent shop signs from falling. Just one year later, only 70 were left－some were lost while others were taken away by merchants who had relocated.

"This move was unsustainable and showed that digital transformation projects are only effective when the government cooperates with other parties such as merchants," says Zhou.

To address this issue, a pilot project was launched, with the government mandating that merchants who run the stores are responsible for maintaining and paying for these IoT devices. Another problem quickly surfaced－not all merchants were willing to pay for these devices, as maintenance fees could cost up to thousands of yuan.

But attitudes changed last winter when one of these devices－a smart smoke detector－helped prevent a fire at an eatery that had left its electric oven running for a long period.

"The devices are effective. Unified management is beneficial to the safety of our shop and the stable environment in the neighborhood," he says.

Getting people to buy in is critical to having a successful smart city ecosystem, says Rui.

"In a smart city, devices are deployed in places where people work or live. This requires the assistance and understanding of residents. It takes more than just governments and companies to ensure the stable operation of the entire system," Rui says.

Fan Bo, a professor at the school of international and public affairs from Shanghai Jiao Tong University, says digital transformation is not merely the introduction of advanced equipment, but also a transformation of management mechanisms.

"Departments within the government should share data, cooperate with one another, and update the previous governance system," Fan says.

"Social participation by different parties, including companies and the public, is also needed in the digital transformation. People need to take responsibility to avoid urban management risks and protect their own interests," he adds.

Yang Hong contributed to the story.