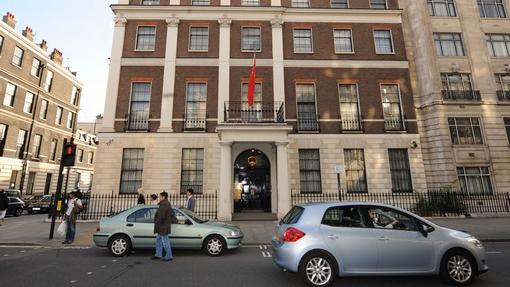 This photo taken from the official website of the Chinese Embassy in the United Kingdom shows the building of the embassy in London.

HONG KONG - A spokesperson for the Chinese Embassy in the UK has expressed strong opposition to irresponsible remarks made by a British government official on affairs of the Hong Kong Special Administrative Region.

The spokesperson made the response when asked to comment on recent remarks made by UK Foreign Secretary Liz Truss expressing concerns over the disqualification or resignation of some District Council members in Hong Kong.

China urges the UK side to stop political manipulation on Hong Kong-related issues and stop interfering in China's internal affairs in any way.

Spokesperson, Chinese Embassy in the UK

In a statement issued on Friday, the spokesperson said that improving the electoral system in the HKSAR, as well as implementing the relevant decision and observing the principle of "patriots governing Hong Kong," are conducive to upholding "one country, two systems."

They also helped to promote the healthy development of the democratic political system in the HKSAR, safeguard the rights and freedoms of Hong Kong residents, and ensure the long-term prosperity and stability in Hong Kong.

"These measures have won full recognition and support of Hong Kong residents and the international community," the spokesperson said.

"China urges the UK side to stop political manipulation on Hong Kong-related issues and stop interfering in China's internal affairs in any way."