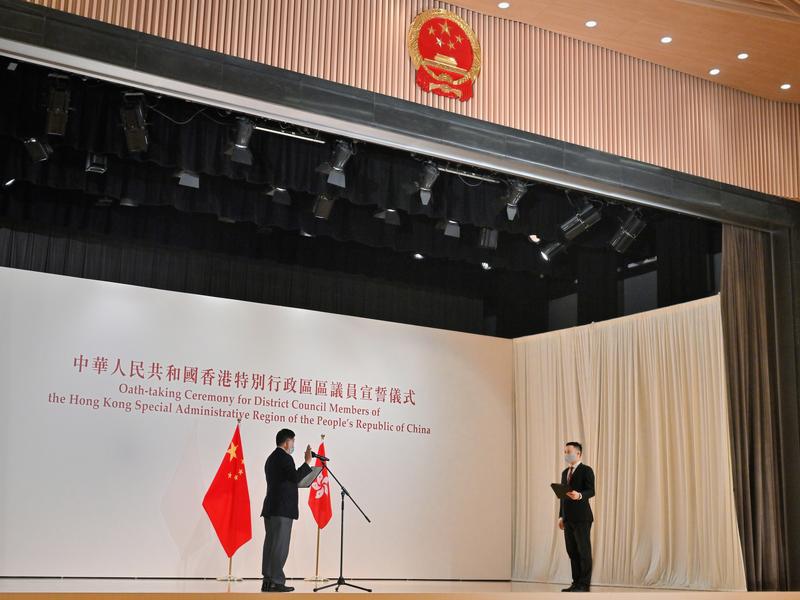 A district councilor (left) swears his allegiance to the Hong Kong Special Administrative Region and its Basic Law during a ceremony at North Point Community Hall on Oct 4, 2021. The oath-taking was administered by Secretary for Home Affairs Caspar Tsui Ying-wai (right). (PHOTO / HKSAR GOVERNMENT)

Members of district councils in the Tsuen Wan, Tuen Mun, Yuen Long, Kwai Tsing and Islands districts swore their allegiance to the HKSAR and its Basic Law during a ceremony on Oct 8. They were the last batch of district councilors to take the oaths.

Secretary for Home Affairs Caspar Tsui Ying-wai, who administered the oath-taking, determined on that day that out of the oaths taken by 68 district councilors, 51 of them were valid.

“As the oath administrator had questions about the validity of the oaths taken by the other 17 DC members, letters were issued to the DC members concerned on October 8 to require them to provide additional information,” the government said in a statement.

Among them, Chan Mei-lin of the Yuen Long District Council tendered her resignation on Oct 11.

After considering the written replies and all relevant information from the remaining 16 members, Tsui determined that the oaths taken by them were invalid.

The decision was based on the principles laid down by the interpretation of Article 104 of the Basic Law by the Standing Committee of the National People's Congress and the relevant legal provisions, according to the statement.

If the oath taken is determined as invalid, no arrangement should be made for retaking the oath.

According to Section 21 of the Oaths and Declarations Ordinance (Cap. 11), any person who declines or neglects to take an oath duly requested which he is required to take by relevant legislation shall, if he has already entered on his office, vacate it.

The government stressed that the oath-taking is legally binding and the oath-taker must sincerely believe in and strictly abide by the relevant oath prescribed by law.