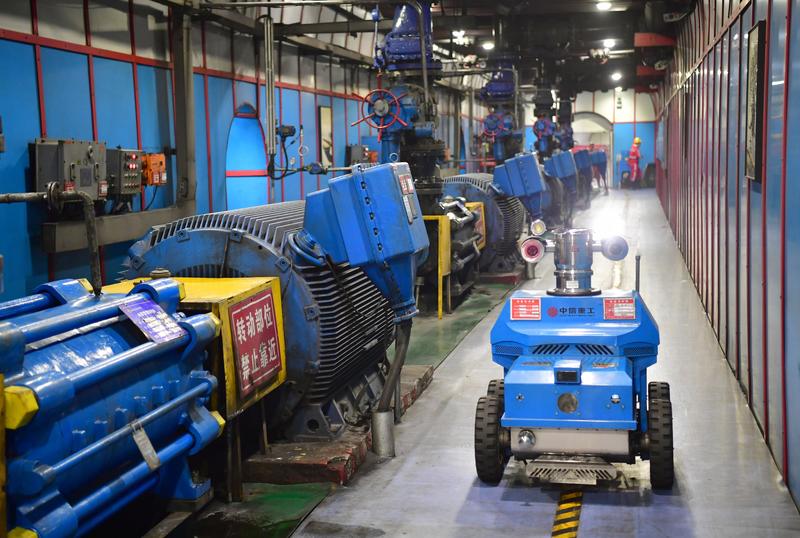 A smart robot patrols at a coal mine in Yulin, Shaanxi province, on Oct 12. (SHAO RUI / XINHUA)

China's skyrocketing coal prices are expected to stabilize gradually, as the government has pledged necessary measures like a crackdown on hoarding and collusion in the market, experts said on Wednesday.

They said such measures will ensure stable energy supplies and prices, which should help bring the coal market back to rational operations. Coal prices will gradually return to a reasonable range, they said.

Thermal coal, which is mainly used to generate power, saw futures prices hit the lower limit on the Zhengzhou Commodity Exchange－down as much as 8 percent to 1,755.4 yuan ($275) per metric ton in Tuesday night trade.

Tao Jin, deputy director of the macroeconomic research center of the Suning Institute of Finance

Chinese coal futures dropped on fears of government intervention in the strained energy sector. Late on Tuesday night, the National Development and Reform Commission, the country's top economic regulator, said it will take necessary measures to rein in runaway coal prices and bring the coal market back to rational operations.

The NDRC warned it would take a "zero" tolerance approach and crack down on illegal activities like spreading false information and price gouging in the market.

The NDRC also said China's coal supplies have already shown signs of picking up after the government took measures to boost output amid a power shortage.

In the next step, it will also closely monitor price fluctuations in the market, further boost coal production, strengthen regulation of the futures and spot markets and crack down on illegal activities like market speculation, the NDRC said.

Tao Jin, deputy director of the macroeconomic research center of the Suning Institute of Finance, said it is necessary for the government to intervene in prices.

"The recent rally in coal prices has significantly increased costs for downstream industries like electricity, steel, building materials and chemicals. And it has also affected the normal production and operations of midstream industries," Tao said.

He said coal prices are rising due to multiple factors, including hoarding and price gouging in the market. "Government measures to intervene on prices and crack down on those illegal activities will help bring rising coal prices back to normal. And we don't rule out the possibility that prices will fall significantly as various parties may reduce their coal stockpiles."

Zhou said: "Record high coal prices will not only increase the costs of midstream and downstream industries but contribute to power shortages. With effective measures, coal prices are expected to stabilize and the current tight energy supply situation may ease off gradually."