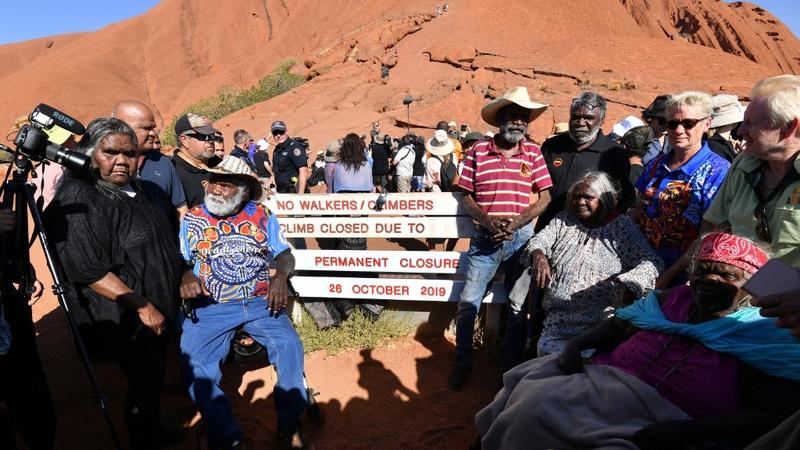 Aboriginal elders gather for a ceremony ahead of a permanent ban on climbing Uluru that comes into place on Oct 26, at Uluru, also known as Ayers Rock at Uluru-Kata Tjuta National Park in Australia's Northern Territory on Oct 25, 2019. (SAEED KHAN / AFP)

MELBOURNE - Australia should set out a new national legal framework to protect Aboriginal cultural heritage, an inquiry into the destruction of ancient rock shelters for an iron ore mine found in a report issued on Monday.

The new framework should include the power to withhold consent for development applications that could affect Aboriginal heritage and also allow traditional owners to take civil action to enforce the new laws, the report said.

The parliamentary panel issued its findings after a 16-month inquiry into how Rio Tinto Ltd last year legally destroyed the sites at Juukan Gorge, Western Australia, that showed evidence of human habitation over 46,000 years, from the last Ice Age

The parliamentary panel issued its findings after a 16-month inquiry into how Rio Tinto Ltd last year legally destroyed the sites at Juukan Gorge, Western Australia, that showed evidence of human habitation over 46,000 years, from the last Ice Age.

Widespread anger at the destruction of the caves cost the jobs of its chief executive Jean-Sébastien Jacques and two other senior leaders and led Chairman Simon Thompson to flag he would step down in 2022.

The panel on Monday recommended that the Australian government legislate a new framework for cultural heritage protection at the national level in agreement with Aboriginal and Torres Strait Islander people.

The new legislation should set out minimum standards for state protections and conform to international best practice around obtaining free prior and informed consent, the report said.

Traditional owners must have primary decision-making power in relation to their cultural heritage in development processes and new laws should provide an ability for them to withhold consent to the destruction of cultural heritage.

Also, new legislation must include adequate compliance and enforcement mechanisms, and penalties.

"Traditional owners should be able to effectively enforce Commonwealth protections through civil action," it recommended.

In its interim report in December, the inquiry said that Rio should pay restitution to the traditional owners of the destroyed area and laid out broader industry guidance that included reviewing consent practices.

The inquiry has held 23 hearings and received close to 200 submissions since it began in June 2020.