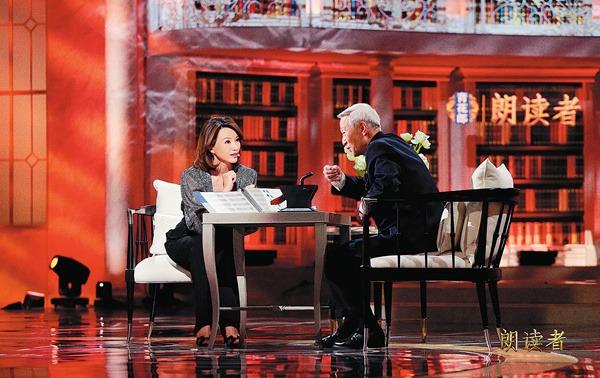 "How long has it been since you last read aloud?" It was a question posed to the audience by producers of The Reader when the first season of the literature-themed talk show aired on China Central Television in 2017.

People who are accompanied by literature are strong because they’ve recruited an army for their minds and souls.

While they hoped it might be the case, the producers probably did not expect the experimental show to go as far as it has-or to make reading fashionable again.

Amid a trend of Chinese reality shows full of amusement and outdoor games, the program, with its soft tone and slow pace, seemed unconventional. Celebrities, who gave the public the general impression that they had little to do with literature, are invited to read aloud their favorite passage from a novel, poem or one of the ancient classics, which echoes their personal stories.

The warmth of the program has been welcomed by audiences. On Douban, China's major film and TV review website, the first two seasons of the program respectively garnered a rating of 8.6 and 9.1 points out of a total 10, putting the show among the most highly acclaimed culture-themed TV shows in recent years.

In September, The Reader finally returned with a third season after a three-year hiatus. Perhaps, COVID-19 and its concomitant complexity of human emotions has provided more reasons for people to reflect and look for solace among the pages of a book.

"I waited for so long (to make the third season) because I was afraid that I wouldn't be good enough to maintain that sensitivity," Dong Qing, director and host of the TV show, recalls.

"However, after everything in 2020, I found that many people, including myself, still need it," she says. "That made me decide to move forward and get the show restarted."

During China's toughest time fighting against COVID-19 last year, Dong saw a picture that depicted a man focused on reading while in the isolation ward of a hospital in Wuhan, Hubei province.

That scene reminded her of a quote from the late British writer W.Somerset Maugham, who is hugely popular in China: "To acquire the habit of reading is to construct for yourself a refuge from almost all the miseries of life."

It also fueled her inspiration. 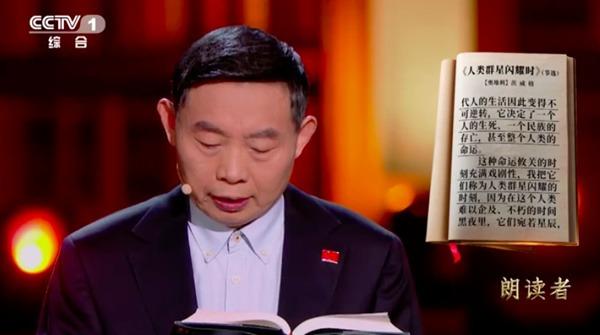 Yang Yuanxi, an academician at the Chinese Academy of Sciences, reads an excerpt from Austrian author Stefan Zweig's Sternstunden der Menschheit(Stellar Moments of Humankind) in the program. (PHOTO PROVIDED TO CHINA DAILY)

"When life slows down, people are urged to meditate," she says. "People who are accompanied by literature are strong because they've recruited an army for their minds and souls."

Echoing Dong's continuous devotion, again, a star-studded list of guests has been drafted to appear on the program. For example, in the first episode of the new season, author Mo Yan, the 2012 winner of the Nobel Prize in literature, shares the emotionally complex books he read when he was young.

"I was often in pain when I read poems, and I even yelled," Mo Yan says on the show. "And I enjoyed immersing myself into the novels and their characters.

"Literature is about souls," he says. "It's intangible and you cannot touch it. But you can always feel it."

In the show, Mo Yan reads an excerpt from his own novella Radish that reveals a child's extraordinary grit and resilience when facing a painful family dilemma.

In the new season, more guests who are not from cultural circles speak about the strength of literature supporting their career.

When Yang Yuanxi, an academician at the Chinese Academy of Sciences, reads an excerpt from Austrian author Stefan Zweig's Sternstunden der Menschheit (Stellar Moments of Humankind), the audience will feel his sense of ambition and work ethic when designing China's BeiDou Navigation Satellite System.

Yu Qiqing, a topographer, joined the expedition to measure the height of Qomolangma, known as Mount Everest in the West, in 1975.In the spotlight, Yu also shows his devotion to working in the wild, his sense of awe in the face of nature, and memories of his fallen teammates through the reading of a stanza from Hymn for the Light by famous poet Ai Qing.

According to Dong, The Reader should offer a platform to not only masters and elites "standing on the tips of pyramids", but also people who are "down-to-earth", because the stories of ordinary people reflect the pulse of the era across wider dimensions.

One such example, which demonstrates this mindset, is perhaps Zhang Guimei, a woman who has spent decades at the front line of education in poverty-stricken regions. She has established a free high school for girls who were on the verge of dropping out of the education system due to poverty, prolonging their dreams and fueling their potential.

Zhang reads one of her own compositions that expresses her determination in her educational career and regret at not being able to spend time with her parents.

"In this new season, we'd like to better reflect the era we're in," Dong says. "What the guests read demonstrates their care for society and deep thoughts on life.

"By inviting representatives of people from various fields, we can see how they love life and work hard to move forward," she explains. "They explore the unknown with courage and find strength in difficulty. Their stories, mixing laughter and tears, will resonate with the audience." 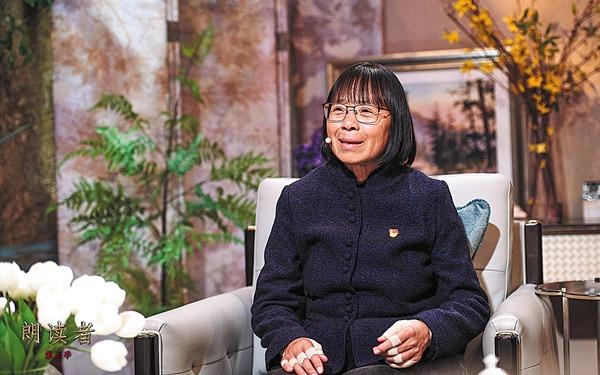 Zhang Guimei, a devoted educator in rural areas, shares her story in the program. (PHOTO PROVIDED TO CHINA DAILY)

In the previous two seasons of The Reader, key words like "nostalgia", "youth" and "gift" were set for each episode. However, in the current season, these inspirational words become questions like "Can we change the world?" or "Which choice would you change if you got a second chance?"

"Each episode is an open-ended discussion," Dong explains. "There's no standard answer, but we want to inspire people to think and sincerely talk with their own hearts."

The show does not always carry such a serious tone of meditation and philosophical thinking.

By inviting Wu Lei, China's top soccer star, currently plying his trade with Spanish club RCD Espanyol, to take part in an upcoming episode, producers are looking to not only attract younger viewers, but also inject a sense of energy.

However, some may be surprised by his choice of material, as Dong reveals that the player will read an excerpt from Wukong, an online novel based on the classic Ming Dynasty (1368-1644) novel Journey to the West.

Wang Yichuan, a professor of art theory at Beijing Normal University, observes that the third season of The Reader reflects a wider spectrum of literature by including more abundant genres of writing in the show.

For example, A Brief History Of Time, the magnum opus of late theoretical physicist Stephen Hawking, and The Importance of Living, a philosophical book by late Chinese linguistics master Lin Yutang, are also chosen for the program. 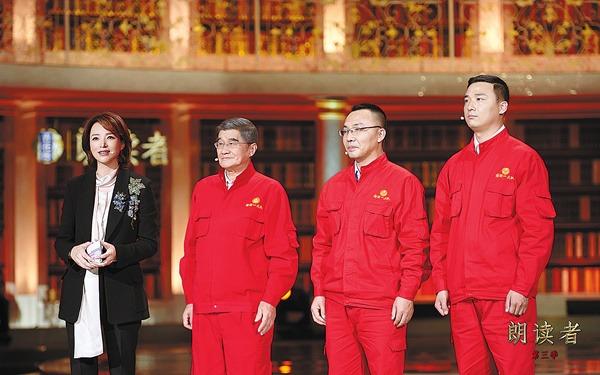 Yu Qiqing (second from left) and two other topographers of the younger generation express their devotion toward work through poet Ai Qing's work Hymn for the Light. (PHOTO PROVIDED TO CHINA DAILY)

"We can see that this program is no longer satisfied with simply showing beauty of language," Wang says. "We can also see an exchange among humanities. When literature is given a broader definition, it can reach out to much wider spaces in people's lives."

"It not only offers audiences psychological strength, but also encourages people to observe beauty within an insightful mind, which is needed in our new era," he says.

"People's stories are varied and their experiences are colorful," Yan Jingming, vice-president of China Writers' Association, says. "However, there is a shared theme among them-their love for their country and home. With that clue, producers can further display their creativity to keep improving the show in the future."