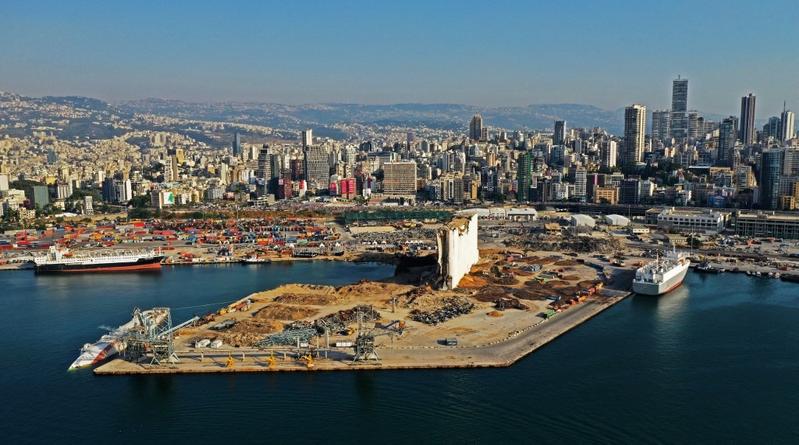 This picture taken on Aug 4, 2021 shows an aerial view of the damaged grain silos at the port of Lebanon's capital Beirut on the first anniversary of the blast that ravaged the port and the city. (PHOTO / AFP)

BEIRUT - A probe into the catastrophic Beirut port explosion was frozen on Tuesday for the second time in less than three weeks after two politicians wanted for questioning filed a new complaint against the lead investigator Judge Tarek Bitar.

The investigation has been facing obstacles since Bitar sought to question some of the most powerful people in Lebanon on suspicion that they knew about the chemicals but did nothing to avert the disaster.

Apart from the suspension of the investigation, senior politicians called for questioning have refused to show up and arrest warrants are not being served

Bitar is under enormous pressure from groups that have accused his probe of political bias and mounting a smear campaign against him. The leader of the powerful, heavily armed Shi'ite political movement Hezbollah announced on Monday it wanted Bitar removed from the case.

The Aug 4, 2020 blast, one of the biggest non-nuclear explosions on record, killed more than 200 people and devastated swathes of Beirut.

Apart from the suspension, senior politicians called for questioning have refused to show up and arrest warrants are not being served.

The probe was suspended in late September on the basis of a complaint questioning Bitar's impartiality. A court rejected the complaint on procedural grounds, allowing him to continue.

Bitar is the second judge to lead the probe since Fadi Sawan was removed from the case in February on the basis of a similar complaint filed by the politicians who are now challenging Bitar's neutrality.

"For the first time, the judicial system wants to function, but it is suffering under the political pressure and interventions," said Paul Morcos, lawyer and professor of international law.

Shortly before being informed of the latest complaint, Bitar had issued an arrest warrant for one of the politicians who filed it, former finance minister Ali Hassan Khalil, a senior politician close to Hezbollah.

Khalil, a senior member of the Shi'ite Amal movement, was not immediately reachable for comment.

The second politician was ex-public works minister Ghazi Zeiter, also a Hezbollah ally, who is due for questioning on Wednesday.

Khalil's arrest warrant is the second for an ex-minister arising from the investigation.

The first was issued for ex-public works minister Youssef Finianos, another Hezbollah ally, in September when he repeatedly failed to show for questioning.

All have denied wrongdoing.

But Bitar's requests were met with resistance and legal complaints questioning his impartiality.

While Bitar has sought to question several politicians who are allied to Hezbollah, including Khalil and Zeiter, he has not tried to question any members of Hezbollah itself.