US to accept WHO-approved vaccines for air travelers 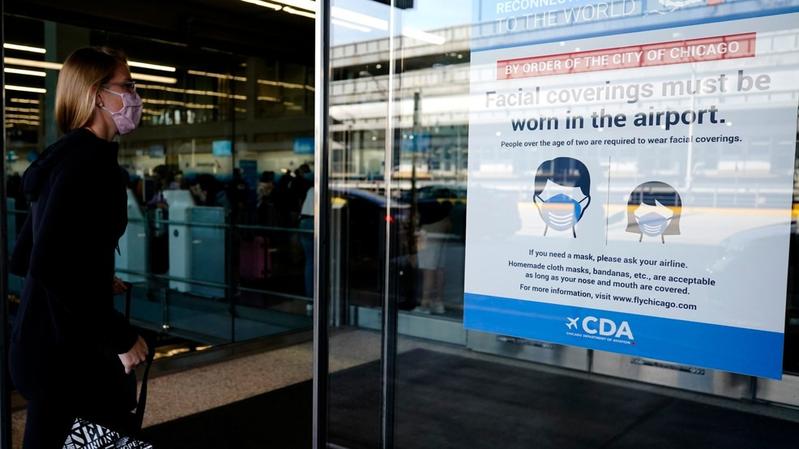 In this July 2, 2021 photo, a traveler walks in Terminal 3 as a sign stating face coverings are required is displayed at O'Hare International Airport in Chicago. (NAM Y. HUH / AP)

The United States will accept the use by international visitors of COVID-19 vaccines authorized by US regulators or the World Health Organization, the Centers for Disease Control and Prevention said late on Friday.

On Sept 20, the White House announced the United States in November would lift travel restrictions on air travelers from 33 countries including China, India, Brazil and most of Europe who are fully vaccinated against COVID-19. It did not specify then which vaccines would be accepted.

A CDC spokeswoman told Reuters Friday, "Six vaccines that are FDA authorized/approved or listed for emergency use by WHO will meet the criteria for travel to the US."

The seven-day average of US cases dropped below 100,000 for the first time since August, another sign the wave fueled by the Delta variant is retreating. Infections are down about 42 percent from the peak of this wave.

The daily death toll is still high - averaging 1,762 as of Thursday - but at the lowest in almost a month.

More than 44 million Americans, or about 13 percent of the population, have contracted the virus so far, and more than 710,000 have perished.

In another development, a snow leopard died after displaying symptoms similar to COVID-19 at a US zoo housing a confirmed case of the virus, officials announced Friday.

Baya, age 2 1/2, exhibited signs of a cough followed by “inappetence and lethargy” and died Thursday, according to the Great Plains Zoo in Sioux Falls, South Dakota. One of the zoo’s Amur tigers tested positive this week, the zoo said. 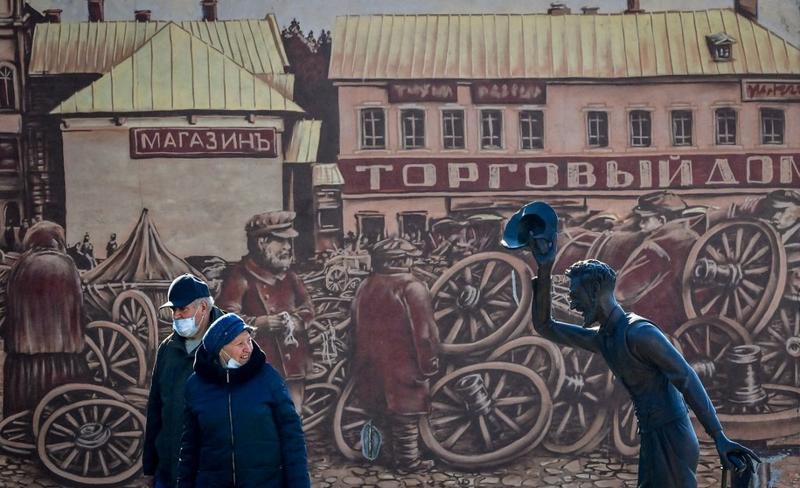 A man and a woamn wearing face masks walk past a sculptural composition "Fair" in Serpukhov some 95 kilometers outside Moscow on Oct 8, 2021. (YURI KADOBNOV / AFP)

Deaths in Russia linked to COVID-19 in August grew to 49,389, adding to a surge in fatalities that’s taken the overall total to nearly 420,000 since the start of the epidemic.

The number of deaths associated with the virus was more than double the 23,877 announced in daily reports by the government’s COVID-19 task force. The Federal Statistics Service, which published the data late Friday, also revised up the record-high total reported in July to 51,044.

Iceland is joining its Nordic peers in halting inoculations with Moderna Inc’s Spikevax shot on concern over side effects.

ALSO READ: Here’s what the next 6 months of the pandemic will bring

The Moderna shot, which has mostly been used in Iceland for second doses, won’t be used until more information over its safety has been collected, the chief epidemiologist said on Friday.

Sweden, Denmark and Finland have this week suspended the shots for younger people because of the risk of heart inflammation as a potential side effect

Starting next week, vaccine clinical trial volunteers will be offered additional approved doses to ensure that they are able to travel abroad, the UK’s Department of Health said.

While the UK recognizes participants in trials as fully vaccinated, many other countries do not, and require visitors to be inoculated with an approved vaccine.

Denmark will offer the vaccine from Moderna Inc to children under the age of 18 after all, the Danish Health Authority said, reversing a previous statement.

On Wednesday, the authority had announced it would stop offering the jab to those under that age, citing new data indicating an increased risk of heart inflammation.

The government also decided to declare a state of emergency, which will come into effect on Monday, and will remain in force until Jan 11.

Latvia's cumulative 14-day COVID-19 incidence surged to record-high 784.1 cases per 100,000 inhabitants on Friday, while a steady inflow of coronavirus patients in hospitals threatened to overwhelm the Baltic country's health system, which has already been forced to limit services to other patients.

Under the new emergency rules, on-site work is only permitted in cases where work from home is not possible. Only employees with valid COVID-19 certificates attesting vaccination against or recovery from COVID-19, or a negative test result, will be allowed into workplaces.

Provision of in-person services will only be permitted in a safe environment, which again means that everyone will need the certificates.

Brazil, which has the world's second-highest death toll from COVID-19 behind the United States, saw its death toll exceed 600,000 on Friday.

Kenya on Friday evening received 160,000 doses of AstraZeneca from Slovakia, as well as 700,000 doses of vaccine from France and Germany donated via the COVAX Facility.

Henriette Geiger, Head of Delegation of the EU to Kenya, said Team Europe has from the start shown vaccine solidarity with Kenya and the world, and has always allowed the export of vaccines to middle and lower-income countries.