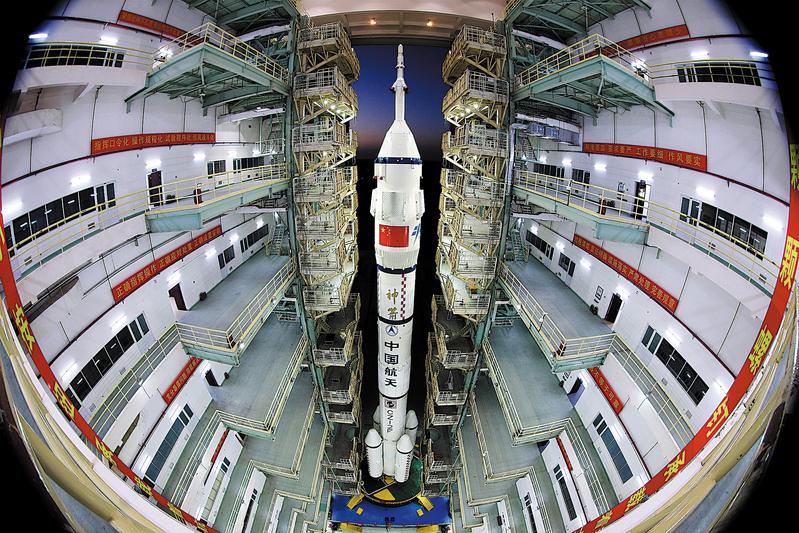 The Shenzhou XIII spacecraft and the Long March 2F carrier rocket are moved from a testing facility to a launch tower at the Jiuquan Satellite Launch Center on Thursday. (WANG JIANGBO / FOR CHINA DAILY)

The Long March 2F carrier rocket that will launch the Shenzhou XIII spacecraft this month was moved to a launch tower at the Jiuquan Satellite Launch Center in northwestern China's Gobi Desert on Thursday morning. It will receive final checks in the coming days, the China Manned Space Agency said.

During the Shenzhou XIII mission, the astronauts, whose names have yet to be disclosed, will be mainly tasked with demonstrating and testing key technologies involved in the assembly and future operations of the Chinese space station, according to mission planners at the agency.

Like their peers in the Shenzhou XII mission, they will carry out spacewalks to test the robotic arm and other instruments for extravehicular activities, and will also conduct scientific experiments to accumulate experience for the station's construction and operations, planners said.

Shenzhou XIII will be the fourth spacecraft to visit China's permanent space station, named Tiangong, or Heavenly Palace, and the second crewed ship to transport astronauts to the orbiting outpost.

They lived in Tiangong for 90 days and made two spacewalks to use a large robotic arm and other equipment to install and adjust devices outside the station.

One of China's most challenging and sophisticated space endeavors, Tiangong will consist of three main components－a core module attached to two space labs－with a combined weight of nearly 70 metric tons. The station's core module－Tianhe, or Harmony of Heavens－was lifted by a Long March 5B heavy-lift rocket from the Wenchang Space Launch Center in Hainan province in late April.