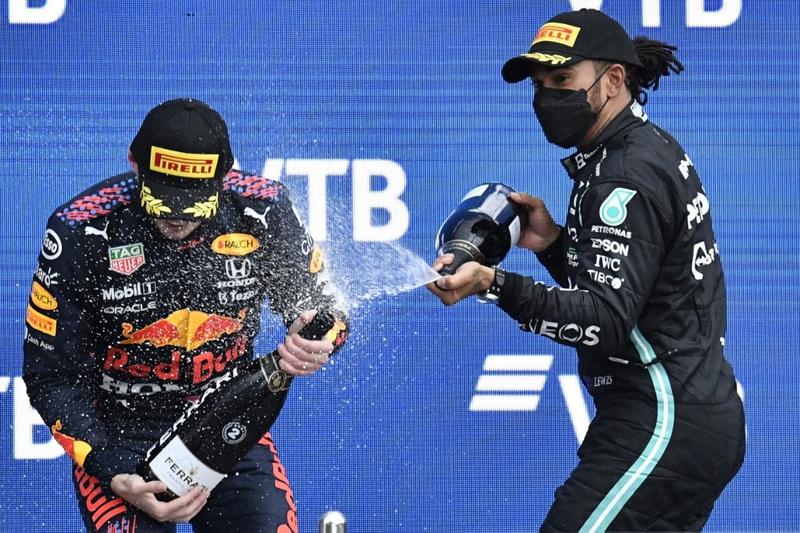 Lewis Hamilton clinched his seventh Formula One world championship in Turkey last year while Max Verstappen had a race to forget, but this time the title remains wide open and the Dutch driver could be the one celebrating on Sunday.

Only two points separate Mercedes' championship leader Hamilton from his Red Bull rival with six races left after Istanbul and the battle set to go down to the wire.

One mistake, one retirement  — whether a mechanical failure or collision  — would be a massive blow at this stage in the season and Hamilton may yet have to take a new engine and penalty.

Verstappen turned 24 last week and an eighth win of the season would put him back on top after Hamilton, 36, seized the advantage in Russia two weeks' ago with his 100th career victory.

Max Verstappen turned 24 last week and an eighth win of the season would put him back on top after Lewis Hamilton, 36, seized the advantage in Russia two weeks' ago with his 100th career victory

Red Bull will also have a special livery on their cars as a tribute to departing engine partner Honda on what would have been the Japanese Grand Prix weekend, but for the COVID-19 pandemic.

"Last year's Turkish GP was of course not the best weekend for us as a team but I think it will be quite different circumstances this year, hopefully the Tarmac will be a bit more grippy," said Verstappen, who finished sixth in the 2020 race.

"I think it will be quite a new weekend in general for everyone, there will be a lot to learn so I’m looking forward to seeing how competitive we are there."

Verstappen has been on pole eight times this year to Hamilton's three and narrowly missed out on the top slot in Turkey last year.

Last year's race was the first at the Istanbul track since 2011 and the freshly resurfaced and slippery track triggered plenty of complaints.

Hamilton, the winner on that wet November afternoon, compared conditions to an ice-rink and said organizers had wasted their money.

That should not be such a problem this time, with the surface blasted to make it less slippery and Pirelli bringing softer tires for a race that is also being held a month earlier.

There will also be a crowd, unlike last year's race behind closed doors, with organizers hoping for 100,000 over three days.

Mercedes boss Toto Wolff said his team were still buzzing after the success of Sochi but 'fortunes can change in the blink of an eye'.

"This season is keeping all of us on our toes and that's something we're enjoying immensely, but it also means we have to be aggressive with our approach to the season, in order to maximize the points available," added the Austrian.

"It's an exciting track layout and a good one for racing, so I think we'll be in for another spectacular twist in this brilliant F1 season."

Canadian Lance Stroll was on pole last year for Racing Point, now Aston Martin, in a career first but it will take something special to be back at the front this time.

Lando Norris put McLaren on pole on a wet Russian weekend, and was heading for his first win until late rain wrecked his hopes, and they could again be in the mix if the weather proves tricky.

"I've been spending a lot of time in the simulator, learning from the experience in Russia, and I'm ready to go again," said the Briton.

READ MORE: Norris was 'depressed a lot of the time' in F1 debut season