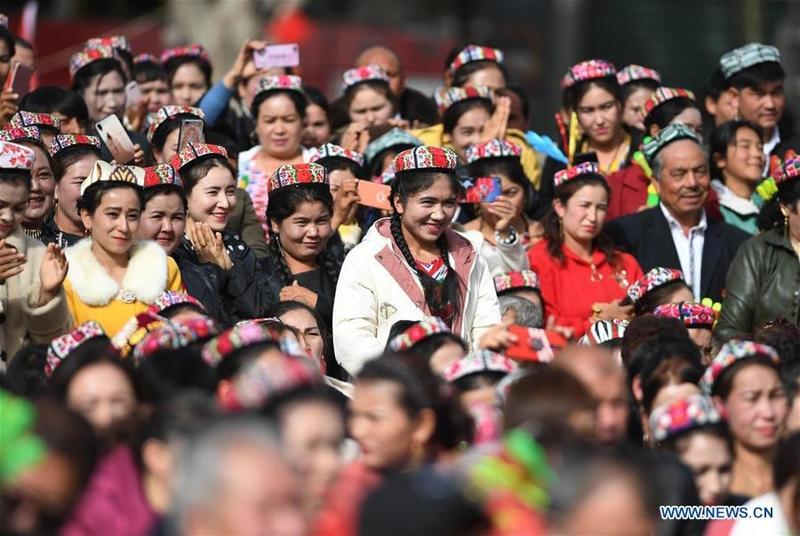 UNITED NATIONS - People of all ethnic groups in Xinjiang are enjoying better lives and the counter-terrorism measures taken in the autonomous region are legitimate, said a Chinese envoy on Wednesday at a virtual side event titled "Xinjiang is a Wonderful Land."

To protect local people and ensure social stability, Xinjiang has taken a series of counter-terrorism ... There has not been a single terrorist attack there over the past 4 years.

In recent years, Xinjiang "enjoys social stability and growing economy. People of all ethnic groups enjoy better lives with their human rights better protected," Zhang Jun, China's permanent representative to the United Nations, said at the event co-sponsored by the Chinese UN mission and the government of China's Xinjiang.

Zhang noted that the counter-terrorism and deradicalization measures are totally legal and legitimate as they "comply with the UN Global Counter-Terrorism Strategy and the Plan of Action to Prevent Violent Extremism, and draw from western countries' practices," adding that the measures are fully understood and supported by all ethnic groups in Xinjiang.

The ambassador recalled that since the 1990s, especially after 9/11, the emboldened terrorists, separatists and religious extremists have plotted and carried out thousands of terrorist attacks in Xinjiang, causing mass casualty of innocent civilians.

"To protect local people and ensure social stability, Xinjiang has taken a series of counter-terrorism and deradicalization measures in accordance with law. There has not been a single terrorist attack there over the past 4 years," he said.

A few western countries fabricated the lie of the century about genocide, Zhang said, noting the fact that over the past four decades, "the Uyghur population in Xinjiang has increased from 5.55 million to 11.6 million, while the average life expectancy has increased from 30 years six decades ago to 72 years today. People are having a better life and enjoying a more secure and stable society."

Some also made up the disinformation of forced labor, he continued, saying that in fact, 70 percent of cotton in Xinjiang is harvested by machine and cotton-picking jobs are scarce, well-paid and highly competitive among workers of all ethnic groups.

The ambassador said that they also cooked up the so-called systematic human rights violations.

"The fact is, in Xinjiang, the remaining 3 million poor rural population has all been lifted out of poverty. There are more than 24,000 mosques in the region," said Zhang.

"We put people and their lives front and center," the envoy said. "Amid the COVID-19 pandemic, Xinjiang, with a population of more than 25 million, has 980 confirmed cases in total, among which 977 recovered and only 3 died."

Zhang extended the invitation to all who wish to visit the beautiful land after the pandemic, and "to see with your own eyes a beautiful and thriving Xinjiang, and the secure and happy life of the local people."