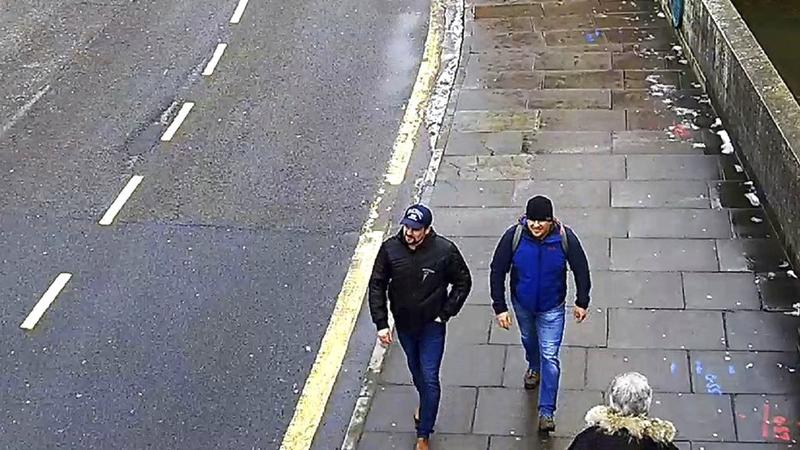 This still taken from CCTV and issued by the Metropolitan Police in London on Sept 5, 2018, shows Ruslan Boshirov and Alexander Petrov on Fisherton Road, Salisbury, England on March 4, 2018. British prosecutors charged the two Russian men with the nerve agent poisoning of ex-spy Sergei Skripal and his daughter Yulia in the English city of Salisbury. (METROPOLITAN POLICE VIA AP)

MOSCOW - A Russian spy chief on Thursday accused Britain of lies and trying to divert attention from other issues after British police said a third Russian suspect had been identified in the 2018 Novichok murder attempt on a former double agent.

The attack on Sergei Skripal, who sold Russian secrets to Britain, caused one of the biggest rows between Russia and the West since the Cold War, leading to the tit-for-tat expulsion of dozens of diplomats after Britain blamed Moscow.

In 2018, British prosecutors charged two Russians with conspiracy to murder Skripal and the attempted murder of his daughter Yulia and a British police officer.

Britain on Tuesday said another Russian had been charged in absentia with the attack, which led to the death of a woman from Novichok poisoning, and said the three suspects were Russian military intelligence operatives.

Russia has rejected any involvement, casting the accusations as anti-Russian propaganda.

"This is an attempt to cover up another lie or to support a previous lie," the Interfax news agency cited Sergei Naryshkin, the head of Russia's Foreign Intelligence Service (SVR), as saying.

Naryshkin said Britain's move sought to "distract the public from the shameful exit from Afghanistan, primarily by the United States and its allies."

The Taliban rapidly seized power in Afghanistan in August amid the West's chaotic withdrawal.