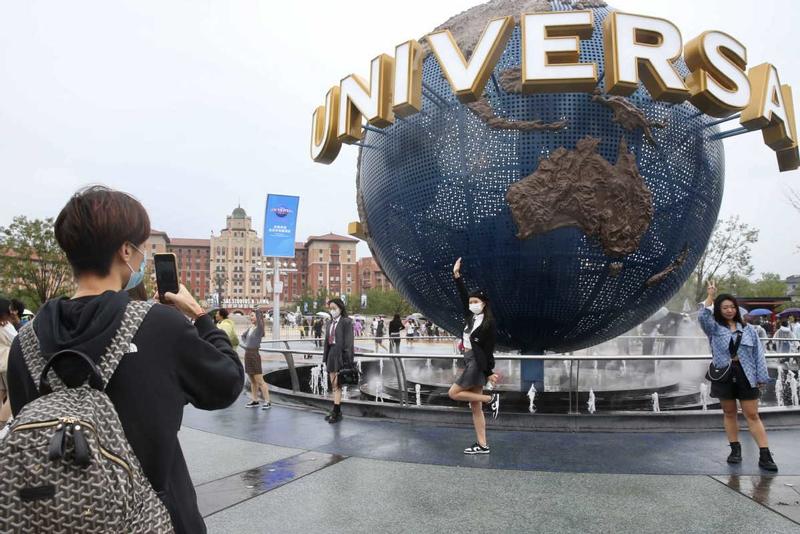 Visitors take photos at the Universal Beijing Resort as the Universal Studios theme park opens to the general public on Sept 20, 2021, during the Mid-Autumn Festival. (Photo / IC)

The Mid-Autumn Festival, also known as the Moon Festival, fell on Tuesday this year. It is usually marked by family reunions, enjoying sights of the full moon, and eating mooncakes.

A sound traffic environment was created for people to go home for family reunions or visit tourist attractions, with no large congestion or major road accidents taking place, according to the Ministry of Public Security (MPS).

An average of 155,000 officers were dispatched every day and 54,000 police vehicles mobilized to patrol, maintain traffic order and crack down on serious violations such as overloading and drunk driving, the MPS said.

The holiday saw about 88.16 million domestic trips, which generated a revenue of more than 37 billion yuan ($5.7 billion), according to the Ministry of Culture and Tourism.

Social order remained stable during the holiday, said the MPS, adding that more than 3,800 scenic spots rated 4A-level and above across the country received 24.6 million tourists in order.

Confronted with the double pressure from epidemic prevention and ensuring social security during the holiday, Chinese public security authorities ramped up security precautions in key areas and public venues.

A total of 175 large-scale events were held safely, and the reported number of criminal and public security cases declined by nearly 30 percent and 23 percent year on year, respectively, said the MPS.

The Mid-Autumn Festival is generally regarded as one of the most important traditional festivals in China and falls on the 15th day of the eighth month on the Chinese lunar calendar.