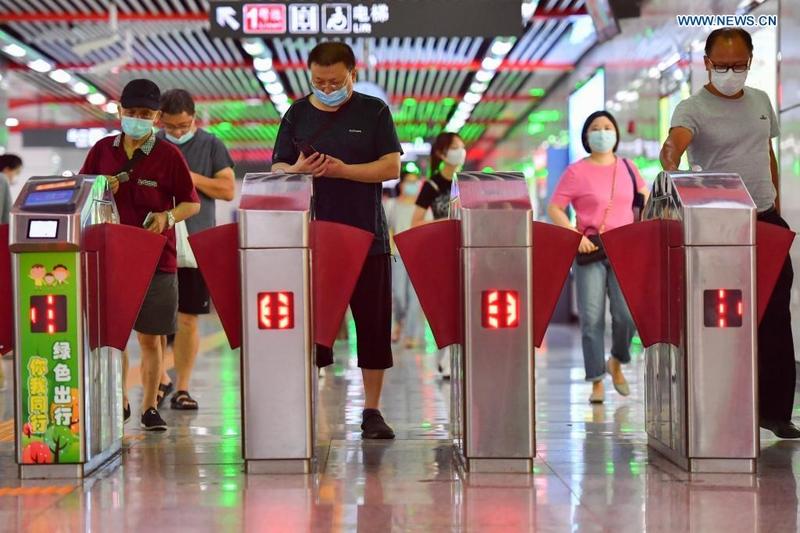 BEIJING - The Chinese mainland has imposed massive travel restrictions, including temporary closure of airports and travel alerts for citizens to other places across the country, to contain the spread of the Delta variant of COVID-19.

All 31 provincial-level regions on the mainland have urged citizens not to go to medium and high-risk areas for COVID-19 or leave the provinces where they live unless it is necessary.

The Chinese capital has suspended 13 pairs of trains to Nanjing and Yangzhou in Jiangsu province, Zhengzhou in Henan province and Zhangjiajie in Hunan province.

Travel agencies online and offline should keep track of epidemic information of destinations and not send groups into or receive groups from areas with medium and high COVID-19 risks, according to a circular issued Tuesday by the Ministry of Culture and Tourism.

All flights at the airports in Nanjing, capital of Jiangsu, and Yangzhou have been suspended. Nine long-distance bus stations in Nanjing and public bus services in Yangzhou were also suspended.

The Chinese mainland on Monday reported 61 new locally transmitted COVID-19 cases, the National Health Commission said in its daily report on Tuesday. Forty-five cases were reported in Jiangsu, six in Hunan, three in Hubei, two each in Henan and Yunnan, and one each in Beijing, Shanghai, and Fujian, according to the commission.

As of Monday, 1,157 confirmed COVID-19 cases were in hospital in the mainland, including 698 imported ones, the commission said.

By 3 pm Tuesday, the country had four high-risk areas and 125 medium-risk areas for COVID-19. 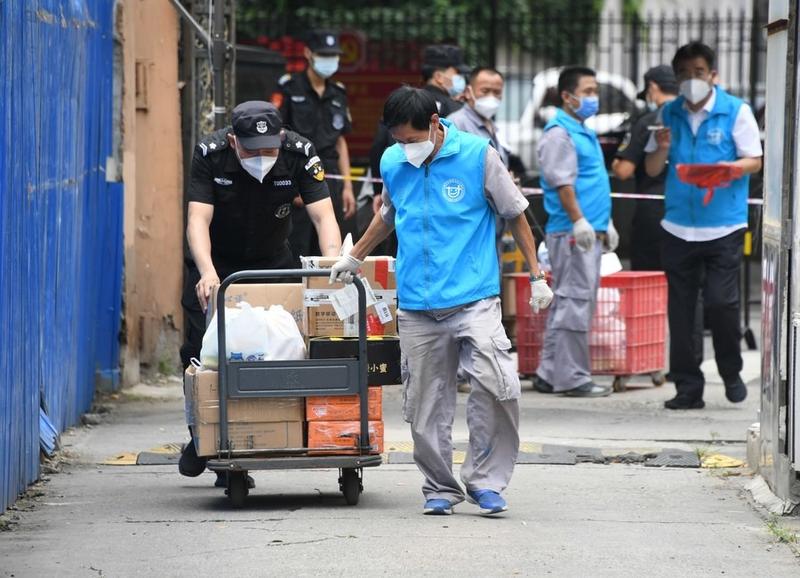 Beijing on July 27 saw the first resurgence of COVID-19 in months, prompting the municipal government to upgrade the capital's epidemic prevention and control measures.

Pang Xinghuo, deputy director of the Beijing center for disease control and prevention, said at a press briefing on Monday that the epidemic prevention and control is again at a critical stage, as cluster infections have been reported in many areas on the mainland.

Beijing on Sunday imposed strict entry and exit controls, asking all residents to minimize their travels and avoid gatherings.

Changping and Fangshan districts of the city, where four confirmed cases have been reported, have carried out environment disinfection in residential communities.

Pang Xinghuo, deputy director of the Beijing center for disease control and prevention, said epidemic prevention and control is again at a critical stage, as cluster infections have been reported in many areas on the mainland

A fifth case was reported on Monday in a residential community in Haidian district. The community and its surrounding areas, involving more than 10,000 people, have been put under closed-off management, and nucleic acid testing is being carried out.

The city has capped personnel flow under 60 percent in all parks, scenic spots, performance venues, and other sites that witness gatherings.

Zhengzhou, capital of Henan province that saw devastating floods last month, launched an emergency measure on Sunday to deliver daily necessities after the city reported an asymptomatic case on Friday.

Food items such as noodles, flour and vegetables were delivered to communities in the city's Erqi District, where confirmed cases were reported.

Zhengzhou, a city with more than 10 million people, launched a citywide nucleic acid testing on Sunday, and upgraded its COVID-19 control level, requiring all people leaving the city to show proof of negative results of nucleic acid tests taken within 48 hours.

Inspection teams have been deployed at the airport, railway stations and expressway toll gates for checking the COVID-19 negative certificates.

Most of the infections were linked to the sixth people's hospital of Zhengzhou, which has been closed for environmental disinfection. All patients and asymptomatic carriers have been transferred to a designated COVID-19 treatment hospital. 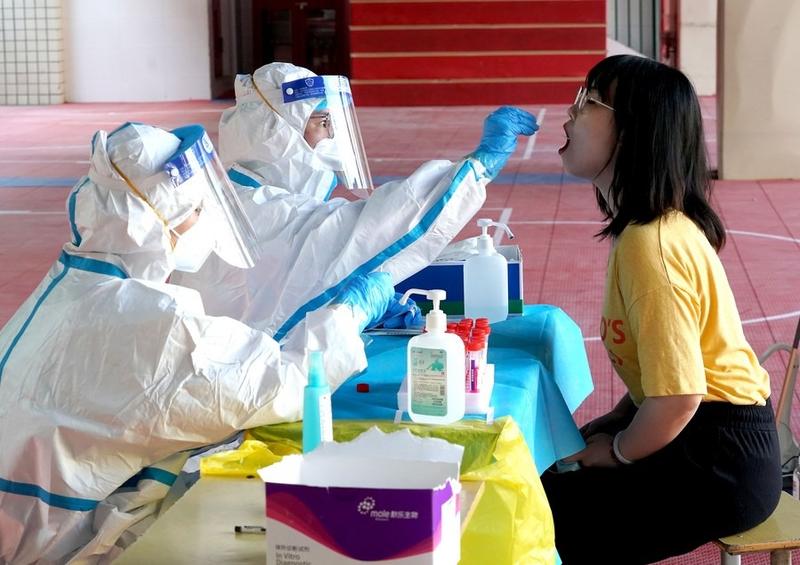 Meanwhile, Jiangsu has ramped up measures to contain the virus spread in crowded indoor places.

A total of 1.7 million people in the main districts of Yangzhou have completed their second round of nucleic acid testing.

Starting from July 28, indoor entertainment venues, indoor cultural and sports centers, training institutions, and childcare centers in the city have been temporarily closed to contain the further spread of the virus.

Wuhan, capital of Hubei province, once hard-hit by the COVID-19 epidemic, is also battling a fresh resurgence of infections.

The city has mobilized all forces after it reported confirmed cases linked to the highly infectious Delta variant last week, ending a streak of more than a year with zero locally transmitted cases.

Wuhan has mobilized all forces after it reported confirmed cases linked to the highly infectious Delta variant last week, ending a streak of more than a year with zero locally transmitted cases

The testing will be completed as soon as possible to screen nucleic acid positive and asymptomatic infections, said Li Tao, deputy secretary general of Wuhan municipal government, at a press briefing on Tuesday.

As of July 20, over 17.1 million doses of COVID-19 vaccines have been administered in Wuhan, and the inoculation rate of people aged 18 and above has reached 77.63 percent, according to the Wuhan municipal health commission.

The metropolis immediately carried out the investigation, disinfection, sampling, and laboratory testing on relevant personnel and places, according to the municipal COVID-19 prevention and control leading group office.

"Vaccination has been proved effective in COVID-19 prevention," said Zhang Wenhong, head of the Center for Infectious Diseases at the city's Huashan Hospital, Fudan University, on Tuesday.

Nearly 1.69 billion doses of COVID-19 vaccines had been administered on the mainland by Monday, the National Health Commission said Tuesday.

"If residents are fully vaccinated, the speed of the coronavirus transmission will greatly reduce. All staff members of airports in Shanghai have been vaccinated, so we are fully confident to slow down the transmission," he said. 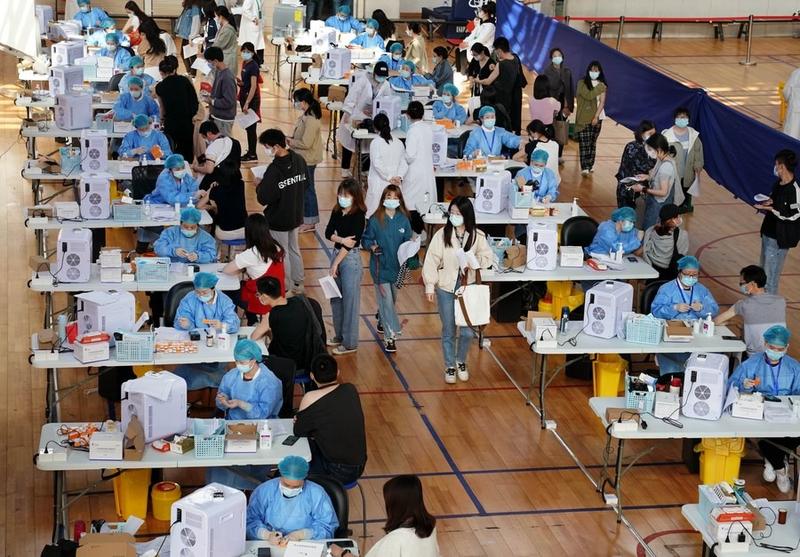 By 9 am Tuesday, 27,174 of 64,860 screened individuals had completed nucleic acid testing with negative results, while the remaining samples are undergoing examination.

Zhang suggested that all residents should check whether their intended tourist destinations are medium or high-risk areas before traveling. He also encouraged tourists to follow personal protection measures, including wearing masks, washing hands frequently, and avoiding gatherings.

The municipal government has strengthened closed-loop management including beefing up inspection of entry and exit as well as key personnel. It is also promoting vaccination and encouraging citizens to follow COVID-19 preventative measures.

Similar to the recent resurgence of coronavirus in Guangzhou, south China's Guangdong province, which was also triggered by the highly contagious Delta variant, most patients in this outbreak have shown mild symptoms, said China's top epidemiologist Zhong Nanshan.

Preliminary studies on Guangzhou's latest COVID-19 outbreak show that China's domestic vaccines are effective against the Delta variant, Zhong said during a summit in Guangzhou on Saturday.