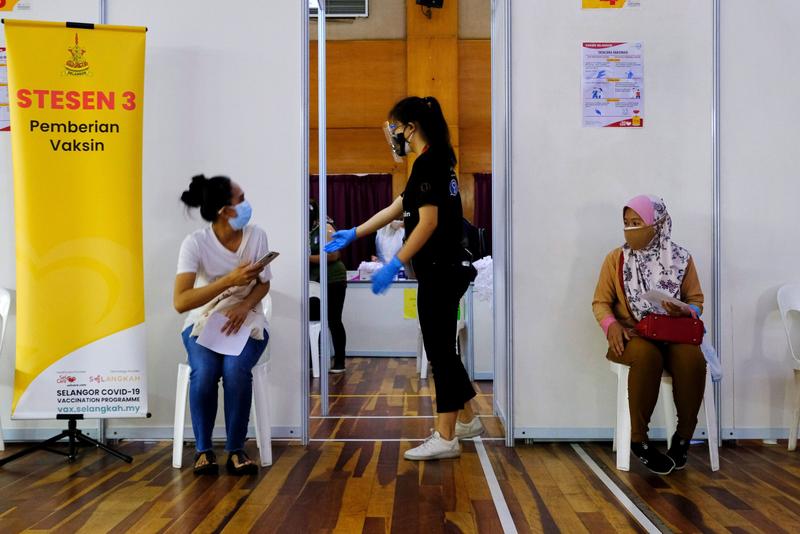 A health worker speaks to a member of the public waiting to receive the Sinovac Biotech COVID-19 vaccine at a vaccination center set up at the PKNS Sports Complex in Kelana Jaya, Selangor, Malaysia, on Aug 11, 2021. (BLOOMBERG)

The milestone comes as Malaysia prepares for life with COVID-19 even as new infections stay high. The country added 15,759 cases on Tuesday, halting five days of declines that saw the tally fall to 14,345 on Monday, the smallest since end-July.

Emboldened by the speedy vaccination rate, Malaysia will reopen three tourist spots including Genting Highlands, a hilltop casino resort operated by the Genting Group, state news agency Bernama cited Tourism Minister Nancy Shukri as saying. The other two destinations that will open under travel bubble are Tioman island and the state of Melaka.

Moreover, gasoline stations, eateries and convenience stores will soon be allowed to stay open until midnight, Defense Minister Hishammuddin Hussein was quoted as saying in local media on Tuesday.

Ten new deaths were recorded in the state, taking the total number of fatalities in the latest outbreak to 255. 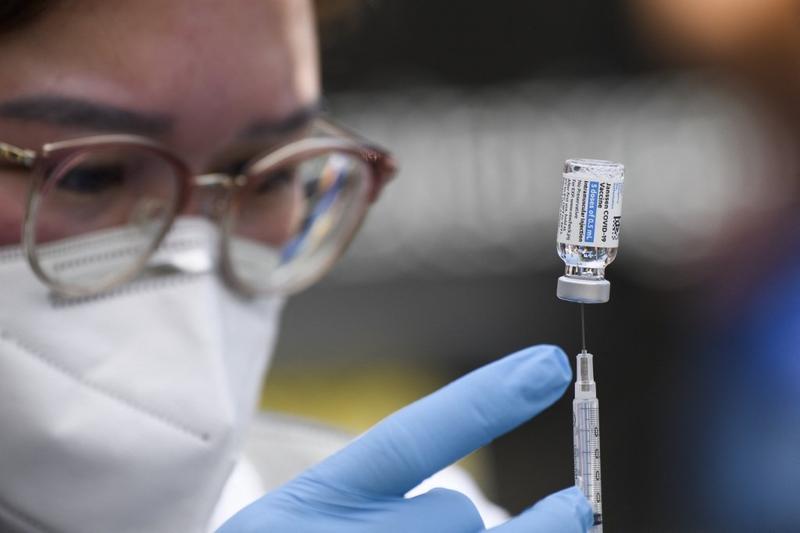 In this Aug 7, 2021 photo, a dose of the Johnson and Johnson COVID-19 vaccine is prepared at a mobile vaccination clinic at the Weingart East Los Angeles YMCA in Los Angeles, California. (PATRICK T FALLON / AFP)

India's foreign minister on Tuesday urged Britain to remove a rule requiring Indians visiting there to quarantine even if they are fully vaccinated.

India's Covishield vaccine, developed by AstraZeneca and manufactured in India by Pune-based Serum Institute, is not recognised by Britain under new rules despite being identical to the doses given to millions of Britons.

The rules, that come into effect next month, have caused anger, with many Indians branding the decision as discriminatory. Britons vaccinated in the United Kingdom with the same Indian-made doses are not required to quarantine.

They could also lead to a retaliation from New Delhi, with Indian government sources saying it was likely to take

reciprocal steps if the issue is not quickly resolved.

The rules, that mandate 10 days of self-isolation for travelers arriving from India, also apply to many other countries using Covishield, including most African ones.

India's COVID-19 tally rose to 33,504,534 on Tuesday, with 26,115 new confirmed cases registered in the past 24 hours across the Asian country, showed the federal health ministry's latest data.

An additional 252 deaths from the pandemic were meanwhile recorded, taking the total death toll to 445,133.

India expects to get its first Johnson & Johnson COVID-19 vaccine doses from next month, filled and finished in India by a partner of the US drugmaker, a source with knowledge of the matter told Reuters on Monday.

Israel will lift the travel ban to Mexico on September 27 due to an ease of COVID-19 infections in the North American country, the Israeli Ministry of Health said in a statement on Monday.

The existing ban on Israelis flying to Brazil, Bulgaria and Turkey will remain valid, the ministry added.

Israeli citizens and permanent residents who want to travel to the three countries must apply to an exceptions committee.

Meanwhile, arrivals in Israel from the three countries are required to enter a seven-day home quarantine, including the vaccinated and recovered travelers.

Those arrivals from all other countries only enter a quarantine of 24 hours at most, until a negative result of COVID-19 test is obtained.

Japan will begin to vaccinate the elderly with the third dose of COVID-19 vaccine early next year, as the country seeks to better deal with the spread of more infectious variants, Vaccination Minister Taro Kono said on Tuesday.

The Ministry of Health, Labor and Welfare decided last week to provide booster injections to people who received the second dose of the vaccine eight months ago or earlier, on the grounds that researches found antibodies to prevent this disease decrease over time.

The launch of the vaccine expanded from medical personnel, starting in February, to people aged 65 and above in the spring, then people with underlying diseases such as diabetes, and eventually the general population.

Japan will decide on Sept 28 whether to lift a state of emergency, broadcaster FNN reported, citing government officials. Prime Minister Yoshihide Suga will make the final decision, according to the report.

The country’s fourth state of emergency was extended through September following a delta-variant-fueled surge in COVID-19 cases and is in effect in 19 of the country’s prefectures.

Laos will receive another 2,434,580 doses of COVID-19 vaccine from the Chinese and Australian governments as well as the private sector in 2021, a senior government official has said.

"So far we have received five types of COVID-19 vaccine, including about 5,567,490 doses of the Sinopharm, AstraZeneca, Johnson & Johnson, Pfizer and Sputnik vaccines," local daily Vientiane Times on Tuesday quoted Director General of the Department of Hygiene and Health Promotion, Phonepaseuth Ounaphome said in a press conference last Friday.

As the vaccination program gains momentum around the country, up until September 19 a total of 2,799,549 people had received a first dose of a COVID-19 vaccine and 1,909,360 people had been given two doses.

Health workers are currently administering the second round of Sinopharm and AstraZeneca vaccinations and urge everyone to come forward to be immunized.

As of Tuesday, the total number of confirmed COVID-19 cases in Laos reached 19,730 with 16 deaths.

A total of 15,118 COVID-19 patients have recovered and been discharged from hospitals.

Mongolia's COVID-19 cases rose to 280,540 on Tuesday, with 2,543 new local infections registered during the past 24 hours, the health ministry said.

A total of 13 more patients over 40 died in the past day, pushing the death toll to 1,132, according to the ministry.

More than half of the latest confirmed cases were detected in the capital Ulan Bator, which has been the hardest hit by COVID-19, the ministry said.

The number of COVID-19 cases in Myanmar has risen to 448,158 on Monday after 1,585 new cases were reported in the past 24 hours, according to a release from the Ministry of Health.

Another 56 new deaths were reported, bringing the death toll to 17,129 in the country as of Monday, the release said.

New Zealand on Friday announced higher fines of up to NZ$12,000 ($8,400) for individuals breaching coronavirus restrictions amid concerns that the current outbreak may spread beyond Auckland to other regions due to people breaking rules.

“Our success has been really based on the fact that people by and large have been compliant,” Prime Minister Jacinda Ardern told a news conference.

“However, there has been the odd person that has broken the rules and put others at risk,” she said.

A person who intentionally fails to comply with a COVID-19 order, such as travelling without permission, will have committed a criminal offence and is now liable on conviction for a fine of up to NZ$12,000, up from NZ$4,000, or six months imprisonment. Fines for companies can go up to NZ$15,000.

On-the-spot fines for infringement offences like failing to wear a mask where it is mandatory will be increased to NZ$4,000 for individuals from NZ$300 previously. If the matter goes to court, the court can impose a fine of up to NZ$12,000.

The changes will take effect in November, subject to the passing of the COVID-19 Public Health Response Amendment Bill.

New Zealand reported 14 new Delta cases on Tuesday as its largest city Auckland will relax restrictions from midnight by moving to COVID-19 Alert Level 3 for at least two weeks.

Tuesday's new COVID-19 infections, all recorded in Auckland and its suburb, brought the total number of confirmed cases in the country's community outbreak to 1,085, Director-General of Health Ashley Bloomfield told a press conference.

Auckland has remained at Level 4, the top-level COVID-19 lockdown, for more than 30 days, longer than last year's lockdown, with schools and none-essential businesses closed.

Pakistan reported 1,897 new cases of COVID-19 in the last 24 hours, the National Command and Operation Center (NCOC) said on Tuesday.

The NCOC, a department leading Pakistan's campaign against the pandemic, said that the country's number of overall confirmed cases rose to 1,227,905. 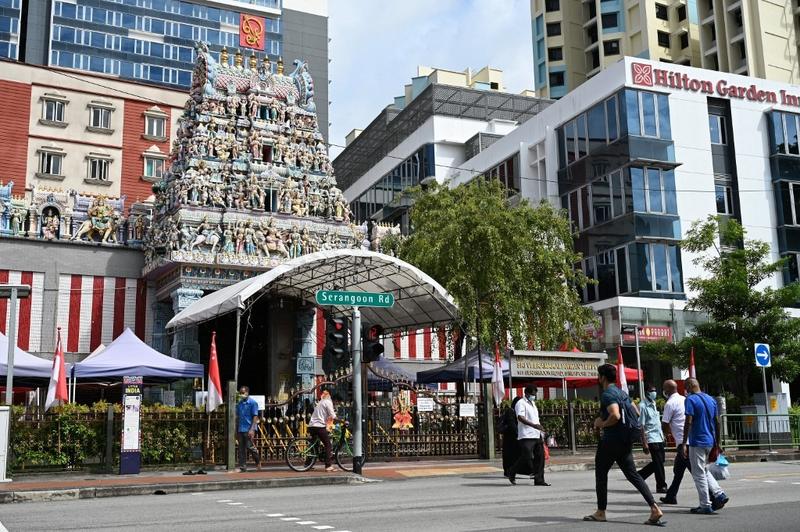 Pedestrians cross the road in front of the Sri Veeramakaliamman temple in the district of Little India in Singapore on Sept 15, 2021. (Roslan RAHMAN / AFP)

Some health experts in Singapore are calling for mandatory vaccination against the coronavirus with a growing toll of severe COVID-19 among unvaccinated people as infections surge and with vaccine take-up plateauing at 82 percent of the population.

The government has linked reopening to vaccination targets but it paused the easing of restrictions this month to watch for signs that severe infections could overwhelm the health system.

Singapore has reduced the work-from-home duration for employees in companies that detect COVID-19 cases in the workplace. The snap work-from-home regime is now 10 days, down from the previously announced 14-day duration, according to an advisory from the Ministry of Manpower released late Monday.

The arrangement will come into effect when at least three cases in the workplace are detected.

Separately, the country’s transport minister said vaccinated travelers from more countries may be able to enter Singapore soon without quarantine, following a successful implementation of the so-called Vaccinated Travel Lane, according to the Straits Times. Only one COVID-19 case has been detected upon arrival among some 900 travelers who have come in from Germany and Brunei under this scheme, the newspaper reported.

Singapore on Monday reported 917 new cases of COVID-19 infection, bringing the total tally in the country to 78,721.

Of the new cases, 832 were in the community, 78 in migrant worker dormitories and seven were imported cases, the Ministry of Health said in a press release.

A total of 1,055 COVID-19 cases are currently warded in hospitals. There are currently 128 cases of serious illness requiring oxygen supplementation, and 18 in critical condition in the ICU, said the MOH.

Thailand plans to accelerate its inoculation program, with a goal to administer 1 million doses daily starting Sept 24, according to Permanent Secretary of Public Health Kiattiphum Wongrajit. In the final quarter, Thailand will have about 70 million doses available and will have to speed up to meet its target of administering at least 100 million by the end of 2021, Kiattiphum said.

Thailand’s main COVID-19 task force will meet on Sept 27 to discuss further relaxation of current measures, according to a government document.

Meanwhile, Bangkok expects to complete at least two doses of vaccines for 70 percent of the residents by Oct 22, a key threshold for allowing vaccinated international visitors to enter without quarantine, according to Governor Asawin Kwanmuang. 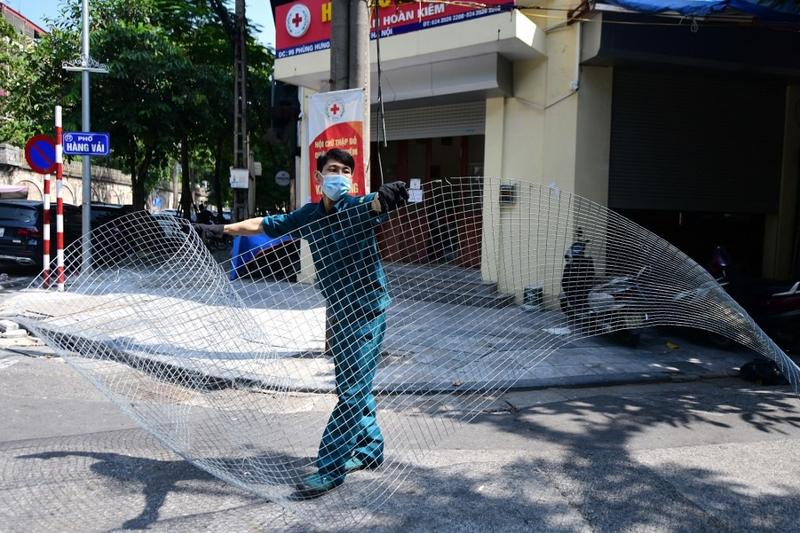 Non-essential services including hair salons and restaurants across the Vietnamese capital Hanoi reopened on Tuesday due to the city's easing restrictions over COVID-19.

The reopening was based on a circular released by municipal authorities on Monday, which also announced the removal of travel permits for inner-city commuters starting from Tuesday.

According to the circular, coronavirus-related prevention and control measures in the city have now been adjusted in line with the Vietnamese Prime Minister's Directive 15, representing a downgrade from the stringent measures applied since July 24.

Specifically, food and drink establishments are permitted to reopen for takeaway and delivery services only and must close before 9 p.m. every day, and some other daily life services including traditional markets and stores selling stationery and textbooks also reopened.

However, certain tight control measures will remain in place until the capital city completes administering second doses of the COVID-19 vaccine for all adults, the circular said.