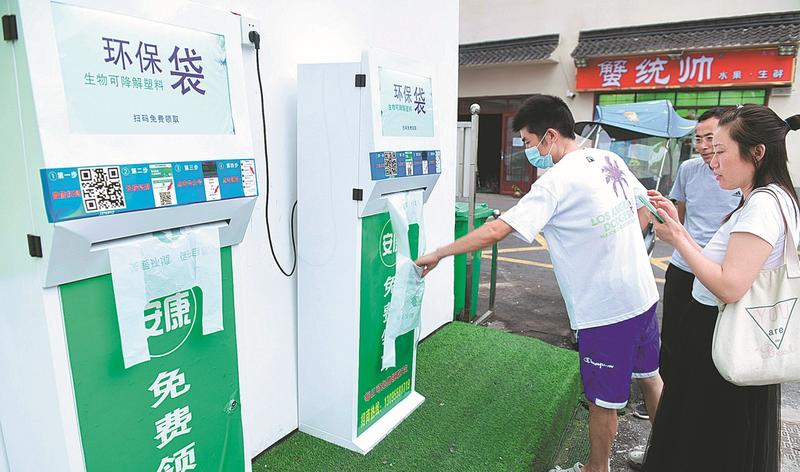 China plans to effectively rein in the trend of polluting plastic products ending up in nature by 2025, according to an action plan made public on Wednesday.

Aside from sharply cutting the use of disposable plastic products and enhancing recycling, the country will strive to stop plastic waste from ending up in landfills, said the document, which was issued by the National Development and Reform Commission and the Ministry of Ecology and Environment.

To make plastic products more recyclable, the Ministry of Industry and Information Technology will hammer out a green standard to reduce the components' complexity, it said.

Measures will be rolled out in the e-commerce and express delivery sectors to recommend green packaging and rule out secondary packaging.

Recyclable packaging will also be promoted, with the number of recyclable parcel packages by 2025 expected to reach 10 million.

The country will support the construction of plastic recycling projects and endeavor to concentrate such facilities into industrial parks especially for recycling.

With many small, polluting plastic recycling factories shut down, the country has established a batch of large trading markets and processing bases for recycling, Wang said, adding recycled plastic has been widely applied in a number of industrial sectors, including textiles and packaging.

China will improve quality and food safety standards for substitutes for plastic, including bamboo, wood, paper and degradable plastics, the document said.

Biodegradable plastic can address the difficulties in recycling plastics used in some sectors, such as agricultural plastic film, he said.

"The promotion of biodegradable plastic in these sectors could dramatically reduce the risk of the leakage of traditional plastic into the environment," Weng said.

To increase the country's capacity to dispose of plastic waste harmlessly, China will support the construction of incinerating facilities for domestic waste.

No new landfills will be allowed in cities above prefecture-level as long as those cities have the conditions to build incinerators or already boast such facilities.

The document also vows to ramp up efforts to clean up plastic waste in inland water bodies and the ocean. Monitoring and investigation will be rolled out for plastic waste and microplastics in the ocean.