By Cui Jia in Kashgar, Xinjiang

Hospitals in region provide evidence to show allegations are false

Arezgul Tursun, head of the gynecology department at a hospital in the Xinjiang Uygur autonomous region, examined forms signed by women consenting to the insertion or removal of intrauterine devices.

She then produced figures for the number of women who underwent such procedures involving the long-term contraception devices from the start of this year until May 20.

Nearly all the 137 doctors and nurses at the Shache township hospital are Uygurs. There is no way we will let Uygur women have forced IUD insertion surgeries. This will never happen

Arezgul Tursun, head of the gynecology department at the township hospital in Shache, Kashgar prefecture, Xinjiang

"We conducted 97 procedures during this period. The number of women choosing to use IUDs for contraception has dropped sharply in recent years," Arezgul said in the consultation room at the township hospital in Yarkant, the most populated county in southern Xinjiang's Kashgar prefecture. Uygurs comprise more than 96 percent of the county's population.

"Our hospital is the first place local women visit if they want to learn about family planning options or have IUD insertion surgeries, so I believe the situation in my department can easily counter rumors that Uygur women are forced to have IUD procedures or are even sterilized systematically," Arezgul said.

Claims of forced contraception and forced sterilization in Xinjiang, first made by German anti-China figure Adrian Zenz, were quickly used by some Western politicians as a weapon to attack Xinjiang's human rights situation.

In Zenz's "research report" published in June last year, he erroneously claimed the Chinese government imposed contraceptive surgeries on Uygur women with one child, and sterilization on such mothers with three children.

The report was later quoted by former US secretary of state Mike Pompeo as the United States leveled allegations of genocide in Xinjiang. Despite the accusations, since 2010, the region's Uygur population has risen by 1.62 million, or 16.2 percent, to more than 11.62 million last year, the latest census data show.

Much of the data in Zenz's report were soon found to be inaccurate, or false. For example, a chart claims that on average, 800 to 1,400 new IUD placements per person are performed in Xinjiang each year, which means each woman in the region would have to undergo four to eight such insertion surgeries every day.

In a report published in May, the Xinjiang Development Research Center said the figures simply do not make sense.

Zenz also claims that in 2018, at least 80 percent of new IUD insertion surgeries in China were performed in Xinjiang.

According to the China Health Statistics Yearbook 2019 published by the National Health Commission, 328,475 such surgeries were performed in the region in 2018, and the nationwide figure was 3,774,318. This means that new IUD placement surgeries in Xinjiang accounted for only 8.70 percent of the national total and that the number cited by Zenz was far from accurate, the center's report said. 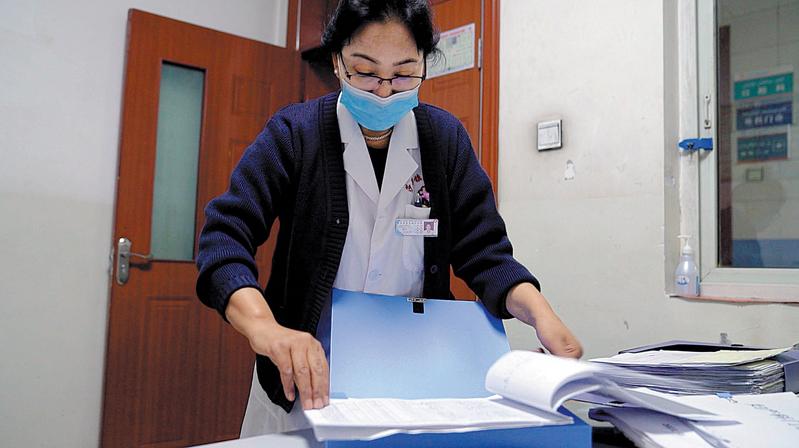 Before they receive IUD insertion surgeries, women must undergo strict medical checks to minimize the possibility of side effects. Arezgul said it is illegal for doctors in Xinjiang to allow a woman to undergo such surgery if medics believe an IUD is not suitable for her.

"Also, nearly all the 137 doctors and nurses at the Yarkant township hospital are Uygurs. There is no way we will let Uygur women have forced IUD insertion surgeries. This will never happen," she said.

Arezgul said she is not surprised that the number of IUD surgeries has fallen in recent years. "Uygur women now have more contraception options and these choices are very accessible. More important, their personal choices are respected by their husbands and families."

Aynur Abudulkerim, a doctor at Kashgar Prefecture No 1 People's Hospital's family planning clinic, did not hesitate in replying when she was asked to verify the number of women undergoing IUD insertion or removal surgeries.

"About 150 women had such surgeries from the beginning of this year to May 18. Considering that the hospital is the largest in the prefecture and also caters to patients from nearby prefectures, the number is really insignificant," Aynur said.

"When women come to us to learn about family planning methods, we tell them about the pros and cons of using condoms, IUD devices and taking contraception pills. It's up to each woman to choose the contraception method she wants." 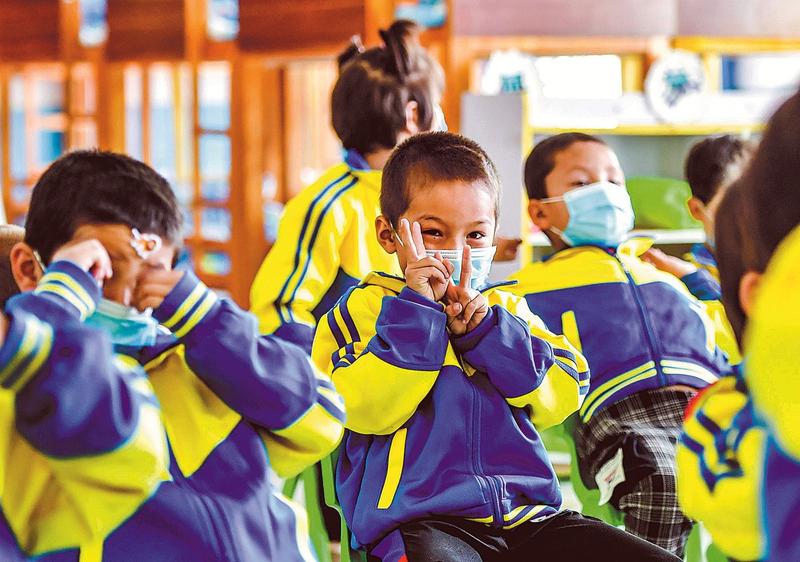 "In the past, they were dependent on their husbands, but had little say in family issues such as having children. Now, women have more opportunities and can support themselves by finding employment. They also know they can make their own decisions, so it's only natural that their views on having children have changed," Sheng said.

Li Xiaoxia, a special researcher at the Xinjiang Development Research Center, said the birthrate and population growth rate in Xinjiang fell from 1.59 percent and 1.14 percent respectively in 2017 to 1.07 percent and 0.61 percent in 2018, mainly because people's views on marriage and having children changed after religious extremism in the region was effectively dealt with.

"As society progresses, the transition of the Uygur population has been achieved more by its own choice and autonomy, rather than through policy guidance and external forces. These changes did not happen suddenly, but were a gradual process," said Li, who has been researching shifts in the region's population.

For some time, it was difficult to promote and implement family planning policy in southern Xinjiang, including Kashgar, Hotan and Aksu prefectures. This led to rapid population growth in areas with large Uygur populations.

Influenced by religious extremism, some people chose to "get married" simply by holding religious ceremonies. They were also told by extremists that marriage certificates issued by the government were illegal and that terminating pregnancy was the practice of "kafirs", or heretics.

Li said: "The extremists also incited locals to resist the family planning policy, saying those who practice contraception are seen as heretics. This resulted in early marriages, bigamy and many unplanned births." 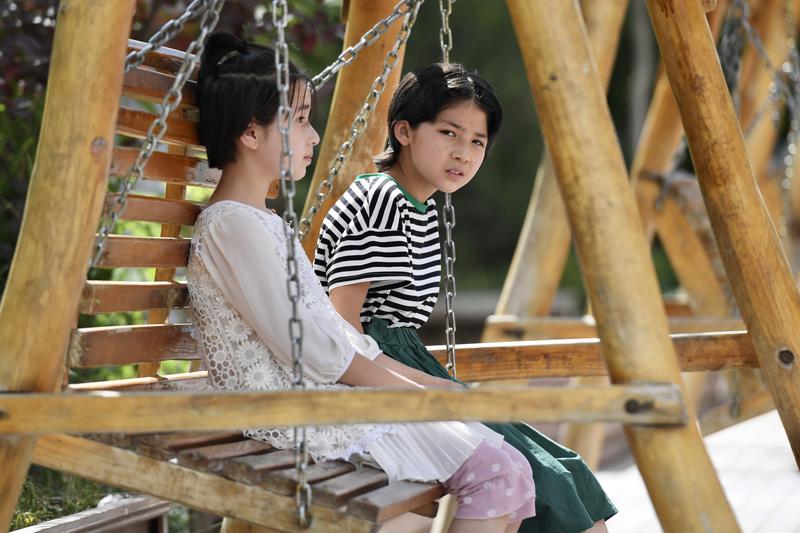 Yang Yuye, deputy director of the Kashgar Prefecture Health Commission, said that before 2018, locals' views on having children were deeply influenced by religious extremism.

"Under such influence, women had no say in how many children they wanted to have, but just kept having them. In a way, many of them become procreation tools," Yang said. "The situation began to change after the measures to eradicate religious extremism took effect. This move also greatly liberated women."

Yang said women now know it is important to consider their health and family situation when planning to have children, as gender equality and reproductive health have been promoted in the process of eradicating extremism.

In an attempt to confuse people, categorizing an IUD as a tool to sterilize women, is clearly ill-intended, Yang added.

"An IUD is just one of the long-term contraception methods. It can be effective for up to eight years and is easily removed when a woman wants to get pregnant. We have never forced women to be sterilized, as their procreation rights are fully protected by law," she said. 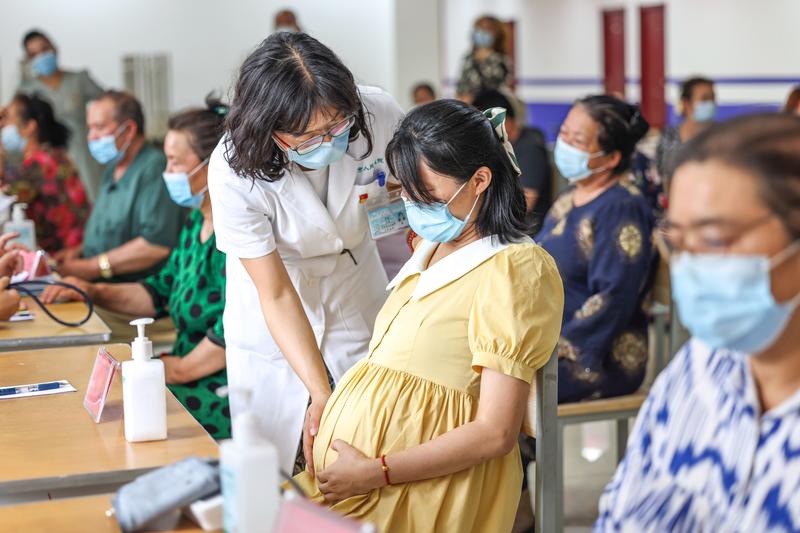 A medical team from Ningbo, Zhejiang province, treats patients in Aksu during a working tour of Xinjiang. (YUAN HUANHUAN / FOR CHINA DAILY)

Referring to claims by some women that they were forced to have IUD insertion surgeries at vocational education and training centers, Yang said such allegations were "quite absurd".

"IUD insertion or removal surgeries must be conducted at proper hospitals. No clinic at a vocational education and training center is qualified to carry out the procedure, so these claims can only be lies," she said.

Such centers were set up to provide training courses to help those influenced by terrorism and religious extremism. All trainees have graduated, the regional government said.

Supported by her husband, Rexitgul had IUD insertion surgery in 2016 after giving birth to the couple's third child. Regulations on population and family planning in Xinjiang state that urban couples can have two children. Rural couples can have three.

"I decided to have an IUD mainly because it's convenient. I also receive a free annual gynecological examination to ensure there are no complications," Rexitgul said at home after returning from her job at an insurance company.

She said that even if the family planning policy is relaxed, she would not have another child.

"Our focus now is to give our children quality education and care. I want to see all three going to universities so they can achieve more in life," she said.