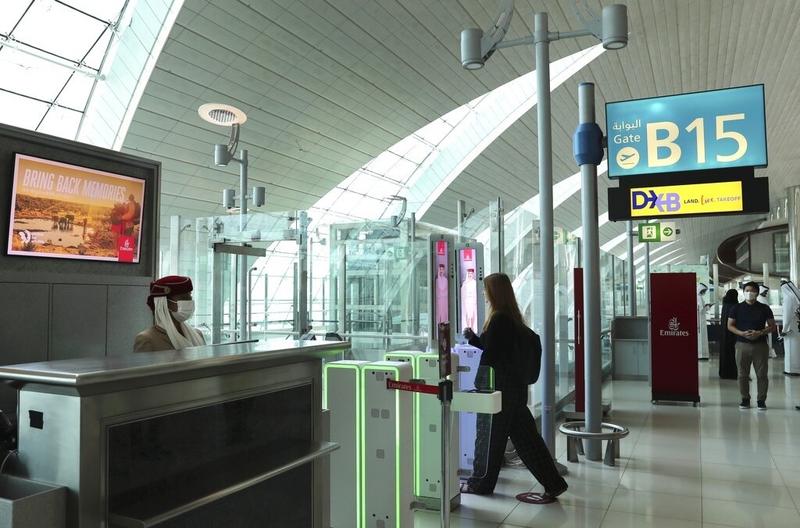 In this March 7, 2021 file photo, a woman enters the face and iris-recognition gate to board a plane, during a media tour at Dubai Airport, in the United Arab Emirates. (KAMRAN JEBREILI, FILE / AP)

The Middle East will continue to be a key labor migration hub despite workforce localization programs in the region, ongoing geopolitical tensions and problems arising from the COVID-19 pandemic, experts said.

Economic diversification plans, particularly among the Gulf Cooperation Council countries, that aim to reduce the dependence on oil and other energy resources, will prompt a need to retain and attract migrant workers who have been integral to the region’s economic development strategy through the years, they said.

Sara Salman, population affairs officer at the United Nations Economic and Social Commission for Western Asia, or ESCWA, which is headquartered in Lebanon, said the GCC countries continue to be a labor migration hub, noting that the bloc had the highest proportion of migrant workers, relative to the total workforce, worldwide.

She said the shift to diversify economies, in addition to the impact of the fourth industrial revolution or the automation of manufacturing and industrial practices will have an impact on the future of work and the demand for skilled migrant workers.

The GCC countries comprise Bahrain, Kuwait, Oman, Qatar, Saudi Arabia and the United Arab Emirates. But not all of them have the same labor policy for migrant workers, and some nations have been making efforts to curb the hiring of foreign workers in order to boost the employment of locals.

Froilan Malit Jr, a Dubai-based Gulf migration specialist from Cambridge University, said in the case of the UAE, Qatar and Kuwait where migrant workers “really dominate”, it would be challenging to replace them as they are part of the countries’ economic strategy and “business model”.

According to the UN, there were an estimated 35 million international migrants in the GCC countries in 2019.  The International Labour Organization said the majority of the workers in the GCC are from Asia, with a sizable number also coming from Africa ─ particularly Egypt, and also increasingly from Ethiopia, Kenya and Uganda.

Migrant workers in the GCC countries hit an average of 70.4 percent, ranging from 56 to 93 percent for individual countries.

But a recent ILO report in August also revealed that the Arab region had registered the highest levels of unemployment worldwide. About 14.3 million individuals, it said, had already been unemployed prior to the COVID-19 outbreak, questioning the capacity of Arab labor markets, and particularly the formal sector, to generate equitable and sufficient employment.

The ILO said political unrest and conflict remains a primary obstacle in the Arab region, impairing enterprise performance, affecting investor and consumer confidence as well as limiting investment and consumption

It also highlighted a skills mismatch and identified manufacturing, hospitality and real estate among the sectors that were hit hard by the global health crisis. About 40 million individuals were under the threat of layoffs, reduced wages and hours of work, it said.

Anis Khayati, an economics professor at the College and Business Administration at the University of Bahrain, said given that a high percentage of the population of most GCC states’ workforce consists of expats, the group is liable to be most impacted by the economic downturn.

Several GCC governments, he noted, have implemented policies that seek to prioritize employment for local citizens at the expense of foreign workers. Since the outbreak of the pandemic, Khayati noted, there has been an acceleration of these measures in countries such as Oman, Qatar, Bahrain and Kuwait.

The professor cited Oman’s decision to replace expats with Omani nationals in its public sector, Qatar’s directive to all state-owned entities to curb spending by implementing layoffs and expat salary cuts, and Kuwait, which aims to slash its expat population from 70 percent to 30 percent.

Khayati thinks a labor shortage scenario will become clearer in the market in the near future because of the departure of both high-earning professionals and low-income workers.

“This will likely be most acutely felt when the economy and oil prices rebound and stabilize to a relative degree, which will, in turn, facilitate the resumption of several infrastructural and development projects that have been currently postponed. The implementation of such projects will be hindered by the labor shortage,” Khayati told China Daily.

The ILO said political unrest and conflict remains a primary obstacle in the Arab region, impairing enterprise performance, affecting investor and consumer confidence as well as limiting investment and consumption. It urged authorities to develop an action-oriented roadmap to advance a “human-centered recovery” encompassing economic security and equal opportunities.

ESCWA’s Salman said the economic crisis witnessed in several Arab countries, like Lebanon and Sudan, which is in northeastern Africa, is serving as a driver for outward migration for people seeking livelihoods elsewhere.

Protracted conflict and occupation in the region has resulted in one of the largest wave of refugees in the past decade, with two-fifths of the refugees worldwide originating from Arab countries, she noted.

There have been reports of Saudi Arabia purging Yemeni academic professionals from its turf, particularly universities in the provinces of Baha, Jizan, Najran. There are an estimated two million Yemeni expats in Saudi.

Malit, the Dubai-based Gulf migration specialist, noted that Saudi Arabia's behavior "is not an exceptional one".

"I see unemployment as a security factor as well," Malit told China Daily, adding that Saudi Arabia has been quite serious in terms of imposing stronger localization, or Saudization, requirements across sectors. The nation’s thinking needs to be contextualized, he said.

The University of Bahrain’s Khayati said authorities in the region must bear in mind the importance of ensuring business continuity, “and to maintain vigilance due to the heightened risk of anti-foreign sentiment … due to the perception among some parts of the local population that expats are a burden on their resources”.