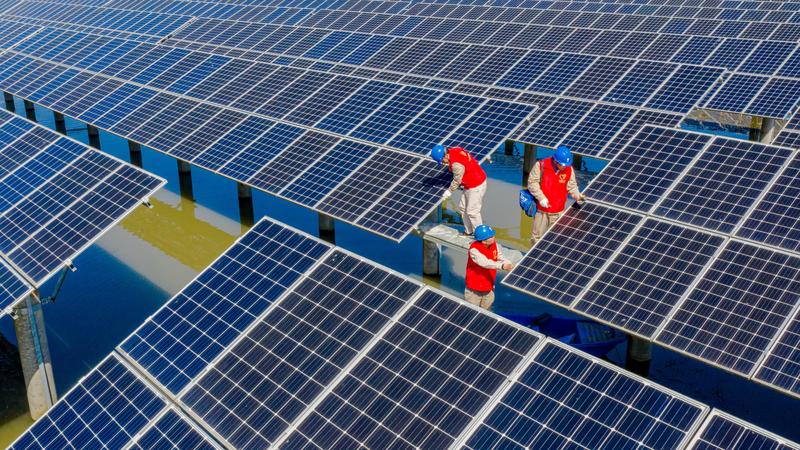 In a move to further boost renewable energy development, China launched on Tuesday pilot direct trading of green power between corporate consumers and renewable energy generators, according to the National Development and Reform Commission.

To realize its climate targets, China needs to accelerate the construction of a power system dominated by renewable energy. As the system absorbs more new energy, however, its operating costs are expected to experience a "marked increase", according to a news release from the commission.

The launch of the pilot aims to tap the potential of market mechanisms in enhancing the cost efficiency of the low-carbon transition in the country's power system, according to a news release from the National Development and Reform Commission

The launch of the pilot aims to tap the potential of market mechanisms in enhancing the cost efficiency of the low-carbon transition in the country's power system, it said.

China aims to peak its carbon dioxide emissions before 2030 and realize carbon neutrality before 2060.

The pilot will allow enterprises willing to shoulder more social responsibilities to directly trade with renewable energy generators. The earnings from the trading are expected to be invested into new energy development and will enhance the power system's capacity to absorb renewable energy, it said.

The pilot will begin with wind and solar power and may be extended to hydropower and other renewable energies in the near future.

It said a joint investigation by the commission and the National Energy Administration found that there are "mature conditions" to commence the pilot program.

Many enterprises have a strong willingness to pay more for green power because of its environmentally friendly characteristics, the commission said.

Shi Lianjun, general manager of the Beijing Power Exchange Center, said the center has received applications from 222 enterprises to participate in the pilot program.

The price of per kilowatt-hour of green power in the pilot is expected to be 0.03 yuan (US$0.5 cents) to 0.05 yuan higher than regular electricity prices in pilot regions, he said at the launch ceremony of the pilot on Tuesday.

The commission said some regions have conducted in-depth research on the trading mechanism.

"Some regions have been hoping for an overall design from the national level to pinpoint the basic standard and regulations for the trading," it said.

The commission also stressed that there are feasible technologies which can guarantee the sound operation of the trading market.

"New technologies such as blockchain can help to thoroughly record information on green power production, transactions, consumption and other procedures," it said.

Aside from ruling out the possibility of information falsification, it said the technologies could make the entire life cycle of green power traceable.

"Aside from greatly optimizing trading procedures, reducing costs and enhancing efficiency, these technologies could effectively rule out risks of errors," he said.