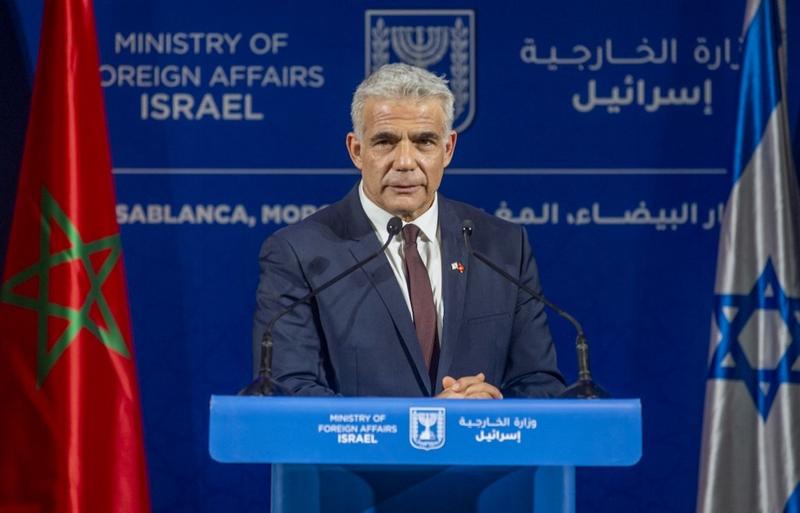 RABAT - Israel and Morocco plan to upgrade their restored diplomatic relations and open embassies within two months, Israel's foreign minister said during a visit to the North African kingdom on Thursday.

Morocco cooled mid-level relations with Israel in 2000 in solidarity with the Palestinians, who launched an uprising that year

Morocco was one of four Arab countries - along with the United Arab Emirates, Bahrain and Sudan - to move towards normalising relations with Israel last year under US-engineered accords.

"We are going to upgrade from liaison offices to embassies," Yair Lapid told a news conference, saying he had agreed on the move, to be implemented in two months' time, with his Moroccan counterpart, Nasser Bourita.

Earlier on Thursday, Lapid inaugurated Israel's liaison office in Rabat and visited a synagogue in Casablanca.

Lapid's visit was the first by an Israeli foreign minister to Morocco since 2003, after the two countries agreed in December to resume diplomatic relations.

Morocco cooled mid-level relations with Israel in 2000 in solidarity with the Palestinians, who launched an uprising that year.

The deals between Israel and the four Arab states angered Palestinians, who have long relied on Arab support in their quest for statehood in the Israeli-occupied West Bank and Gaza. Until last year, only two Arab states - Egypt and Jordan - had forged full ties with Israel.

Abdelaziz Aftati, a senior leader of the co-ruling Islamist PJD party in Morocco, condemned the move to open embassies, saying: "We will spare no effort to counter the Zionist project."

At the news conference, Lapid repeated his view that the time was not ripe for any major breakthrough in peace efforts with the Palestinians, which collapsed in 2014.

He cited internal Palestinian divisions and the structure of the current Israeli government, an alliance of left-wing, Arab, centrist and right-wing parties in which consensus on peacemaking would be difficult.