By Wang Xu in Tokyo and Sun Xiaochen in Beijing 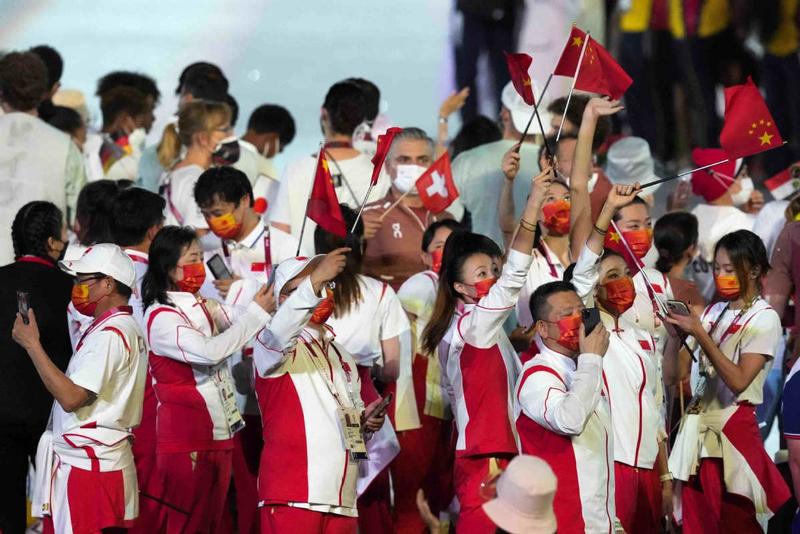 As the Tokyo 2020 Olympic Games drew to an end on Sunday evening, they left behind a lasting impression of sportsmanship, friendship, inspiration and hope.

These Olympics were the first to be held largely without spectators, with the near-empty 68,000-capacity stadium in the Japanese capital offering a sobering reminder of the challenges posed by COVID-19.

However, the joy and excitement resulting from the Games will long remain in the memory.

In his speech at the closing ceremony, International Olympic Committee President Thomas Bach told the athletes, "In these difficult times, you give the world the most precious of gifts－hope.

"For the first time since the pandemic began, the entire world came together. Sport returned to center stage. Billions of people around the globe were united by emotion－sharing moments of joy and inspiration. This gives us hope. This gives us faith in the future," said Bach, a former Olympic fencing gold medalist.

During the Games, which ran for 17 days, 339 medals were awarded in 33 sports, with skateboarding, surfing, sport climbing and karate making their Olympic debuts. A total of 94 countries and regions claimed at least one medal this year, more than at any other Olympics. 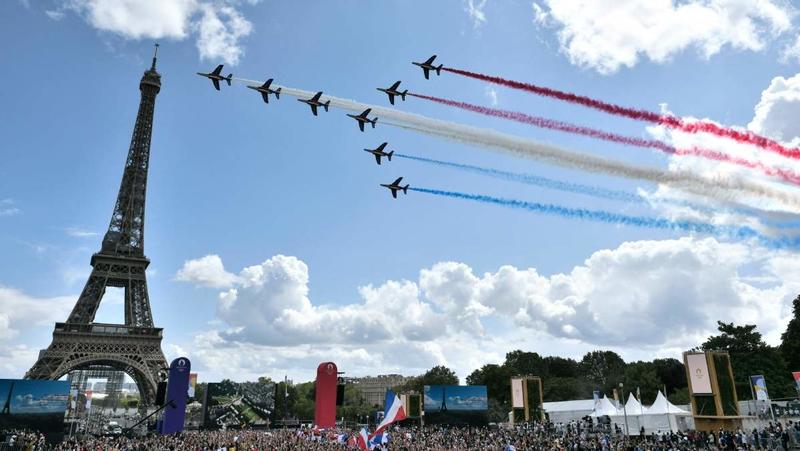 A flypast is staged over the Eiffel Tower in Paris during the closing ceremony in Tokyo. (STEPHANE DE SAKUTIN / AFP)

Fierce competition to be faster, higher and stronger continued to the final day of the Games, when Team USA made a comeback to surpass China in the number of gold medals.

Before the final day, China led the medal table for 11 consecutive days and was ahead of the United States by two golds.

China's two other Olympic squads, Team Chinese Taipei and Team Hong Kong also made breakthroughs at the Games, with the former winning two golds, four silvers and six bronzes, and the latter claiming one gold, two silvers and three bronzes.

Turkmenistan, San Marino and Burkina Faso claimed their first-ever Olympic medals at the Tokyo Games, while the Philippines, Qatar and Bermuda won their first Olympic golds. 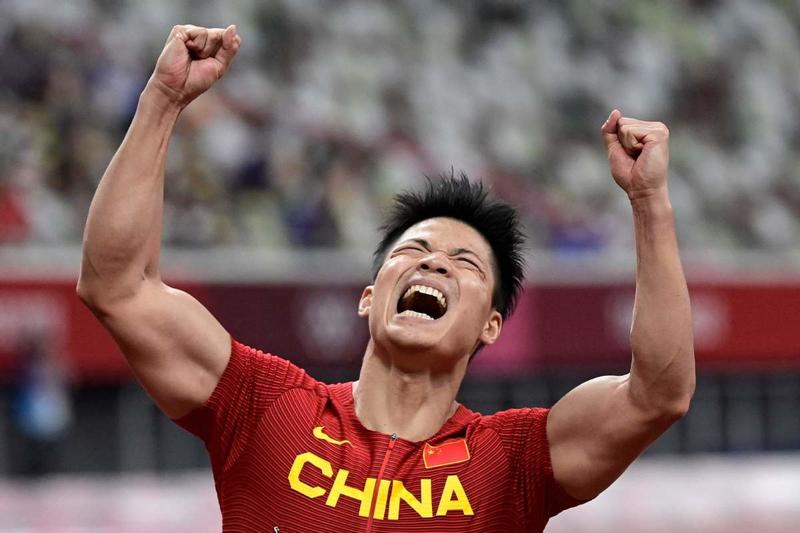 The Chinese delegation hailed its 38 golds as another outstanding achievement, equaling China's haul at the 2012 London Olympics.

At the 2008 Beijing Olympics, China dominated the gold medal table, while the US finished with the second-highest number of golds.

In a congratulatory message sent to the Tokyo Olympics delegation, the Central Committee of the Communist Party of China and the State Council said: "You have won immense glory for your country and people …You've overcome severe challenges brought about by the COVID-19 pandemic, and fulfilled your mission wonderfully."

The outstanding performances of Chinese athletes sparked passion and patriotic sentiment at home.

For example, despite not winning a medal in the three Olympics he has taken part in, including the Tokyo Games, sprinter Su Bingtian was termed an "eternal god" by Chinese netizens.

With a time of 9.83 seconds, Su made history in Tokyo, setting an Asian record on the way to becoming the first Chinese athlete to qualify for the men's 100-meter final at an Olympics. 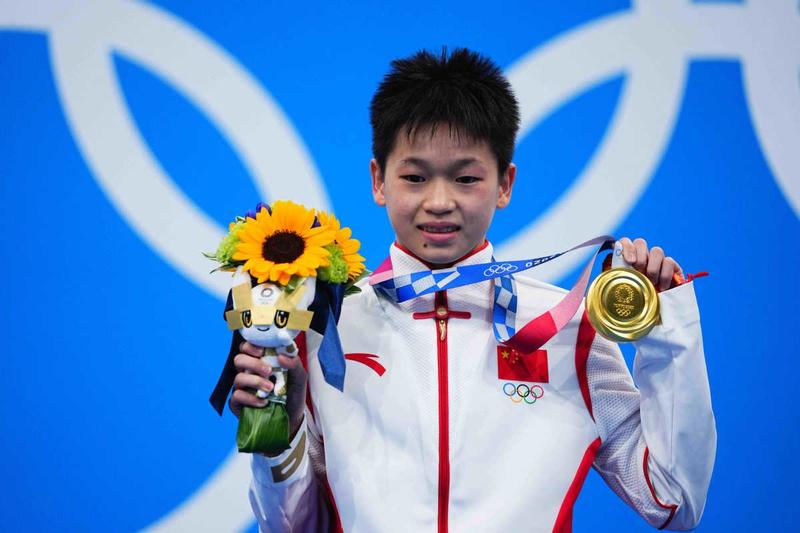 Although he finished sixth in the final, Su's delight was evident－shattering the notion that Asians are not built to succeed in an event long-dominated by Western athletes.

After the final, the number of Su's fans on Sina Weibo rose to more than 500,000 in just two days. An exclusive interview with Su's US coach Randy Huntington by China Daily was viewed more than 13 million times, triggering 150 million discussions on the internet.

In honor of his achievement, Su was chosen to be Team China's flag-bearer at the closing ceremony.

The 32-year-old said in a group interview: "It's an honor like no other. To be an athlete representing China in this closing ceremony is a huge privilege.

"In Tokyo, I can see that we have made a huge improvement in athletics. For China to hit 9.83 seconds is something we've never been able to do before. This means that China has changed from a country that watches, to a country that stands shoulder to shoulder with the big guys."

In addition to Su, a group of young Chinese stars shone brightly in Tokyo.

Quan Hongchan, 14, stunned the world with three superb dives to achieve the highest score ever in the women's 10-meter platform event. The baby-faced Quan scored perfect 10s in three of her five dives. 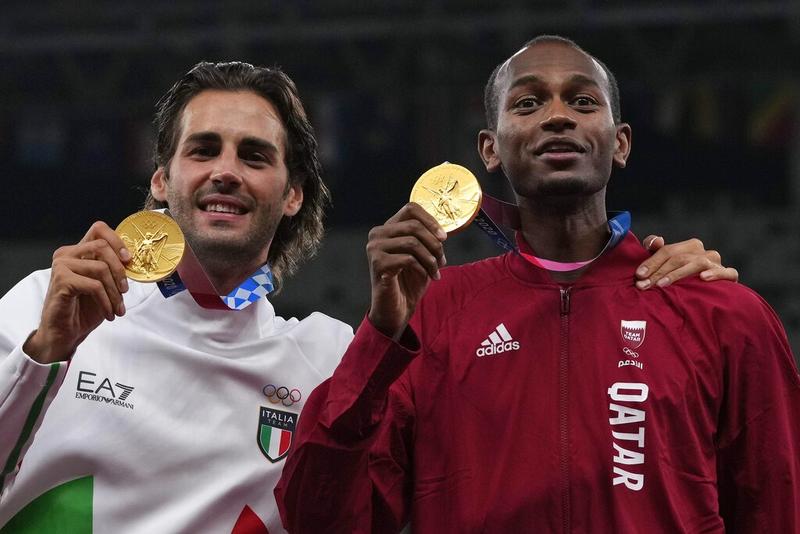 Quan's story is both inspiring and endearing.

She said she made every effort to win, in order to support her low-income family and earn money so that her mother, who is ill, can be treated.

"I feel that I have to earn money to send home to mom. She is ill, and I want to make a lot of money for her treatment so that she can be completely cured," Quan said in a post-event interview.

Quan's success and story led to snacks, game machines and medical services reaching her family, as after her victory, the teenager said she wanted to eat latiao, a spicy snack made of wheat flour and chili.

China sent 431 athletes to Tokyo, with 58 of them born after 2000 contributing more than 10 golds, raising high expectations for another bumper haul in the future. 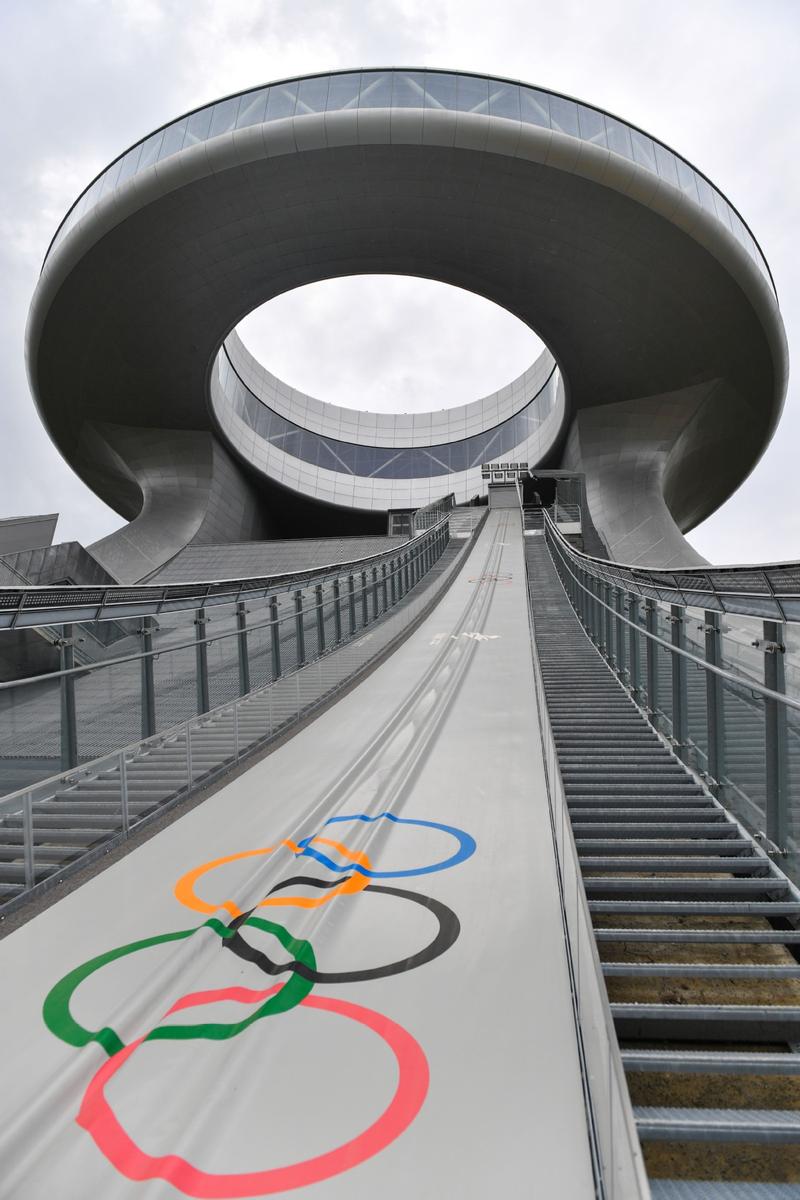 The ski jump in Chongli, Zhangjiakou, Hebei province, is one of the 12 competition venues completed and tested for the Beijing 2022 Winter Olympics. (PHOTO PROVIDED TO CHINA DAILY)

Along with Team China's outstanding performance, there were a number of touching moments at the Tokyo Games.

The men's high jump ended in tears for Mutaz Essa Barshim of Qatar and Gianmarco Tamberi of Italy after they decided to share the gold medal.

The tears came in mid-evening on Aug 1 after the pair outjumped other competitors in the event, but could not better each other.

After they both failed all three attempts to clear the Olympic record height of 2.39 meters, the judges called them over.

They were given the chance of a jump-off to decide the gold medal winner. However, events took a surprise turn when Barshim asked,"Can we have two golds?"

Officials agreed. Tamberi then jumped into Barshim's arms and everyone in the stadium stood and applauded.

Barshim said after the event:"Everyone has been telling me what a historic moment it was. The impact is definitely huge." 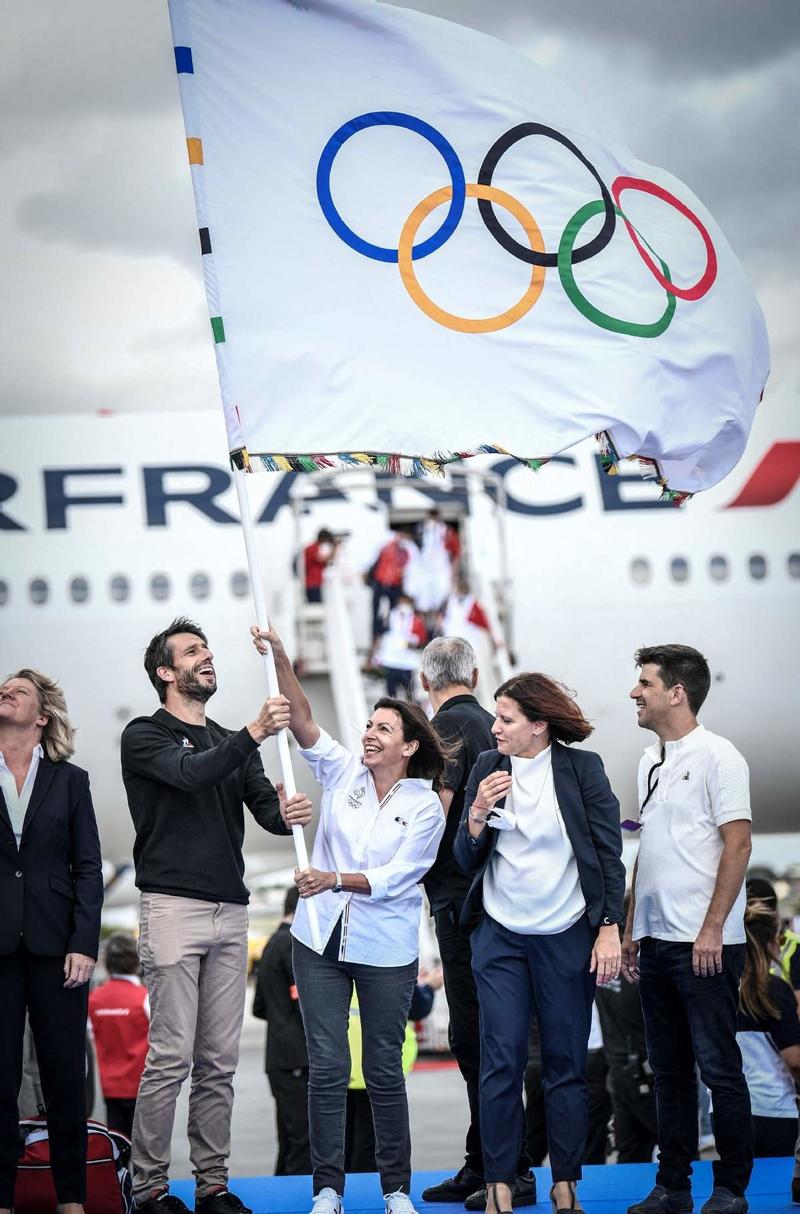 Aram Mahmoud, from the refugee team, produced another unforgettable moment.

Through playing badminton, the 24-year-old hopes to eventually be reunited with his family in Syria, which he has not seen for six years. He considers taking part in the Tokyo Olympics to be one of the highlights of his life.

"When they announced my name－that I was in the team－it was one of my best moments," Mahmoud said.

Although he failed to reach the knockout round, Mahmoud is the perfect example of an athlete continuing to compete after being forced to leave his homeland.

The United Nations High Commissioner for Refugees, Filippo Grandi, said, "Surviving war, persecution and the anxiety of exile already makes them (such competitors) extraordinary people, but the fact that they now also excel as athletes on the world stage fills me with immense pride." 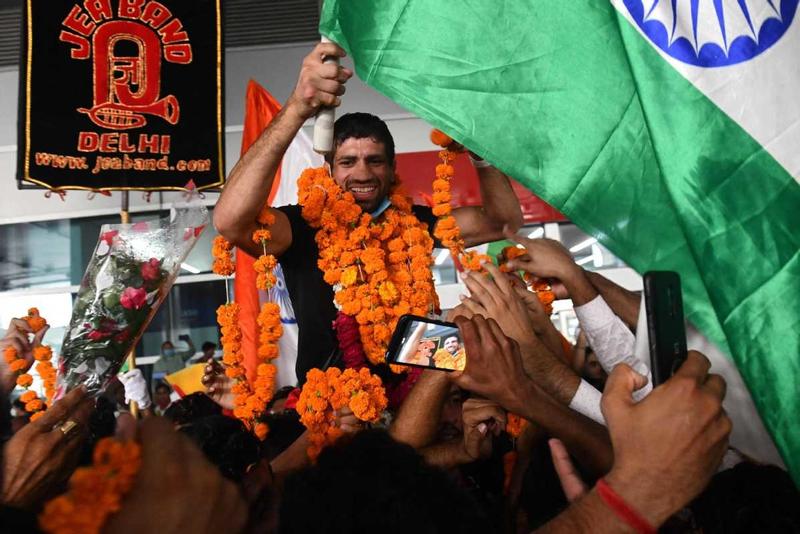 Ravi Kumar holds the Indian national flag as he is welcomed by fans at New Delhi airport on Monday after winning the silver medal in the men's freestyle 57-kilogram wrestling in Tokyo. (PHOTO / AFP)

After the excitement of Tokyo, there are the Beijing Winter Olympics to look forward to in less than six months' time.

The Games, to be staged from Feb 4-20 next year and which will open in the Chinese capital, are being co-hosted by Zhangjiakou, Hebei province.

The 12 competition venues have been completed and tested, while other facilities are scheduled to be finished by October, according to the Beijing Organizing Committee for the 2022 Olympic and Paralympic Winter Games.

A 34-strong delegation from the Beijing organizing committee for the 2022 Games was sent to Tokyo to hear from Japanese counterparts how to stage such an event during a pandemic.

After gaining firsthand knowledge and experience, the organizers are confident of delivering a streamlined and safe Winter Olympics.

Yan Cheng, human resources director for Beijing 2022, said,"Observing how the Japanese hosts proceeded with their operations and services for the Games during the pandemic enlightened us in many respects.

"It's been a fruitful trip for our staff members and we will make the best of it by thoroughly studying and analyzing all cases and experiences."

Inspired by her compatriots' performances at Tokyo 2020, China's snowboarding Winter Olympic silver medalist Liu Jiayu has raised her expectations for the home Games next year.

"Closure of the Tokyo Games marks the beginning of Beijing 2022. We've been anticipating this moment for so long. It's time for us to step up, and hopefully I can finish on the Olympic podium again at home," said Liu, who won a silver medal in the snowboarding halfpipe at the 2018 Winter Olympics in South Korea.