A policy of turning farmland into forests is safeguarding the waterway and boosting incomes. Cao Yin reports from Yan'an, Shaanxi. 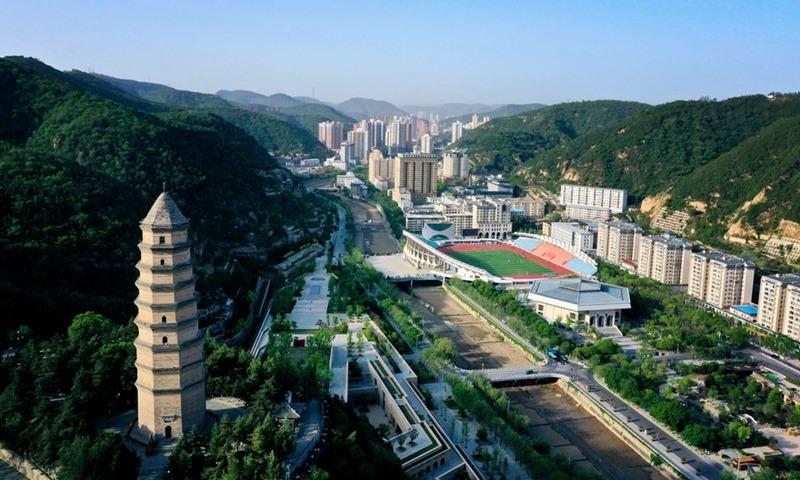 An aerial photo of the greenery that has sprung up in Yan'an since the environmental program started in the late 1990s. The photo was taken by a drone in May. (LIU XIAO / XINHUA)

His home, Zanjiashan village, was located in a valley alongside the Yellow River, where the atmosphere was always windy and sandy.

When it rained, the river flooded, covering the land with water and silt and making it almost impossible for him to leave home.

In the 1980s and '90s, the small settlement in Yichuan county, Yan'an, Shaanxi province, had a harsh living environment and poor transportation infrastructure.

"When we farmed, we depended on the weather gods, and when we wanted water, we had to leave the house (to fetch it)," Lan said.

"Though I lived near the river, I couldn't reach it in three hours because it took so long to cross the many channels," said the 70-year-old as he recalled the old days.

Today, the area around the mountains is covered with pine and cypress trees, while the outside world is now accessible via purpose-built roads.

All the changes are the result of a "green revolution" that began in Yan'an about 20 years ago and saw farmland transformed into forests. 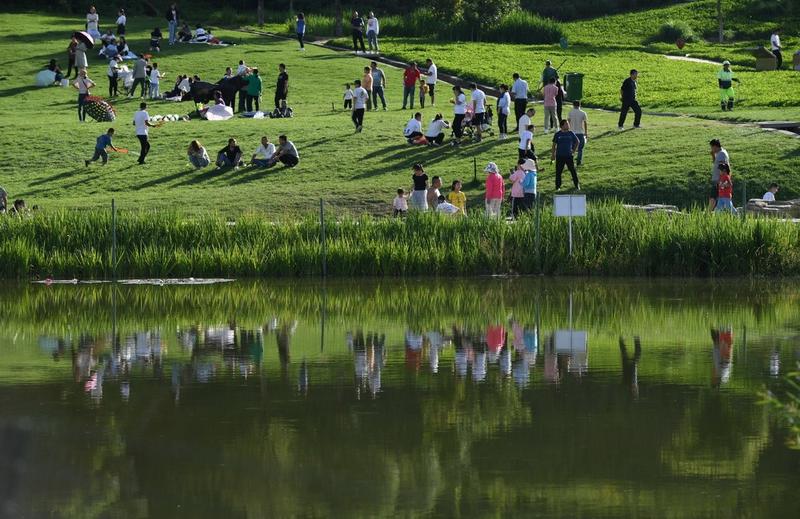 The loose soil, broken terrain, long-term erosion of the steep slopes and excessive logging led to severe vegetation loss and resulted in large amounts of the loess soil being washed into the river during rainy periods. It turned the water yellow, giving the river its name.

Shaanxi is located on the waterway's middle reaches. Once, serious soil erosion not only endangered the safety of people living further downstream on the lower reaches, but also hampered the development of the province.

"Water and soil conservation in Shaanxi have always played an important role in China's history," said Cao Hongxing, deputy head of Yichuan. He noted that an average 9.5 million metric tons of sediment were washed into the river every year in the 1980s, trapping the people of Yichuan in a harsh, poverty-stricken environment.

"It could be said that environmental fragility was a major factor in us being left behind in terms of economic and social development at that time," he recalled.

The situation was similar in Wuqi, a county in Yan'an about three hours from Yichuan by road.

"The air was so dusty that when I was young, I dared not wear a white shirt. No matter how clean it was, it would be covered with dirt soon after I went out," Yan Zhixiong, a local resident, said.

To remedy the situation and beautify the mountains and rivers in China's northwestern region, Yan'an took the lead in a nationwide program introduced by the central leadership in the late 1990s to return farmland to forests.

Both Lan and Yan recalled that it wasn't easy to convince the villagers to plant trees initially, because many people were reluctant to change their lifestyle.

"Lots of people couldn't feed themselves due to the bad environment and poor farmland, so some were worried they would have no food to eat if they planted trees instead of crops," Yan said.

He added that his frequent trips around the county meant he saw the scale of the problem and thus found it easier to accept the idea of planting trees.

As a result, he took pains to talk with other villagers and explain the benefits of planting trees, telling them that governments at all levels would provide subsidies and food. He also encouraged the people to go outside to work and see the wider world.

As the Party chief of Zanjiashan village at the time, Lan persuaded some friends to take the lead in planting trees and he also visited each family to show them how the move would help them live better lives.

In 1998, those efforts saw Wuqi become the first county in China where the mountains were declared off-limits to ramblers and animal grazing was forbidden. A year later, the large-scale conversion of farmland into forests started across Yan'an.

After many years of environmental restoration work on the plateau and the river, Yan'an's greenbelt has developed continuously.

The vegetation coverage has risen to 81.3 percent from 46 percent more than 20 years ago, while the volume of sediment entering the river every year has fallen from 258 million tons to 31 million tons, a drop of 88 percent, Cao said. 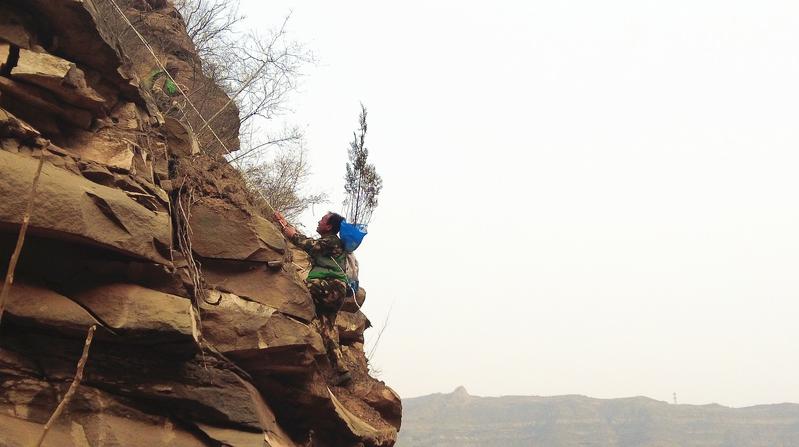 The mountains flanking the river are steep and the soil is thin, which presents a challenge to those who want to plant trees. In response, Yichuan has developed its own planting techniques.

Wang Yonghong, head of a planting team in the county, explained one of them: the team members dig a pit in which they place rocks they remove from the bare mountains, then they fill it with soil.

"When the wind is strong, we bury the seedlings deep. When there is no water, we bring it here to irrigate the mountains," he said.

Since 2004, Wang and his team have used those techniques to plant more than 333 hectares of trees on the right-hand side of the Hukou Waterfall.

While they have never had a serious accident, he said the work can sometimes be dangerous.

"In April, for example, I planted trees on a more-than-10-meter-high cliff on the right-hand bank upstream of the waterfall," he recalled. "I almost fell off the cliff when I was hauling 4 to 5 kilograms of saplings by rope."

The team comprises local farmers who can bear hardship and have a good sense of responsibility.

Some of the team members have been part of the afforestation program for more than 10 years, so they have well-developed planting skills and rich experience in greening work.

The county has eight such teams, and the one led by Wang has more than 30 members. 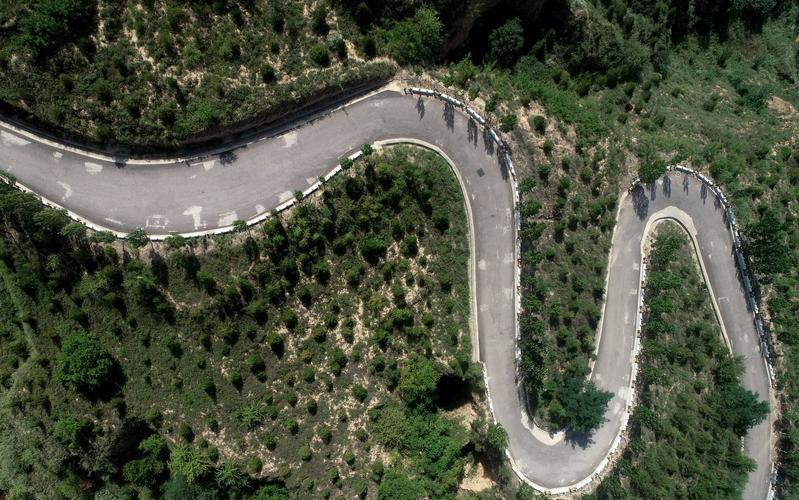 In addition to cleaning up the mountains and improving the river, its banks and water quality, the "green revolution" has promoted local economic growth.

Data on the National Forestry and Grassland Administration's website show that Yan'an had more than 253,000 hectares of apple cultivation areas in 2019, with annual output of more than 3 million tons and output value of 13 billion yuan (US$2 billion).

That year, the output value of peppers and dried goods, such as walnuts and dates, reached 1.3 billion yuan, while that of the forest economy was 120 million yuan, the website said.

The policy of returning farmland to forests has also lifted Yan'an's villagers out of poverty.

In 2014, Zanjiashan, Lan Fengcheng's village, was relocated from the valley to flatland. It now stands about 6 kilometers from the scenic area around the waterfall, which is a major tourist attraction.

"The villagers have earned more money, some by going outside as migrant workers and others by planting trees in the village. When they found the sky had turned blue and the environment had improved, many decided to return home and start their own businesses," said Lan Tiangang, 60, a former head of the village committee.

"To provide them with a sound business environment, I negotiated with colleagues and decided to move our village closer to the scenic area, where they could open homestays and restaurants to attract more tourists to visit the waterfall."

Lan Fengcheng said: "All the efforts to return the farmland to forests have been worthwhile. We've beautified our home, and now we live better lives."