Students hit out at US visa refusals 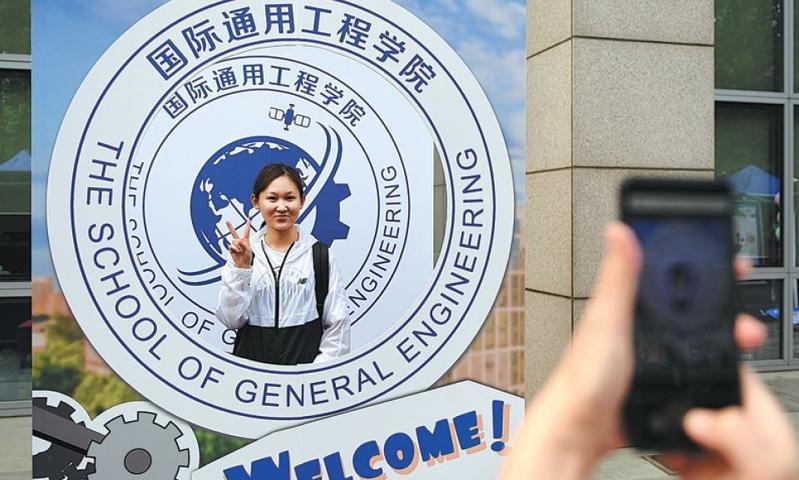 A group of students in China pursuing various subjects have one thing in common－they have been denied visas to pursue postgraduate studies in the United States due to Presidential Proclamation 10043.

Because of this refusal, the group refers to itself as "the 10043 students".

I feel so helpless as a foreign student. We have become an easy target for the US government to score political points

Kerry, Chinese student applying to study in the United States

Issued in May last year by former president Donald Trump, the order bans entry to Chinese students and researchers deemed "security threats" for alleged links to the Chinese military.

A handwritten note on a student's visa refusal sheet obtained by China Daily reads, "Per Presidential Proclamation 10043, because of attendance at Harbin Institute of Technology, we are unable to issue your visa at this time." Other refusals state, "Today's decision cannot be appealed."

Having been denied an F-2 visa twice－first in September at the US consulate in Guangzhou, Guangdong province, and again in May at the US embassy in Beijing, an applicant calling himself "Mr Xiao" said he believed this was because he attended Harbin Institute of Technology in Heilongjiang province as an undergraduate.

He did not intend to study in the US, but wanted to join his wife, who is a postdoctoral researcher at a cancer institute near Los Angeles. The couple have two children, ages 3 and 5.

"The F-2 visa does not allow the holder to study or work full time in the US. How could a homemaker engage in espionage?" Mr Xiao said.

However, he did not have the chance to voice this view to consular officials, as the refusal sheet was printed the moment he answered the question "Where did you graduate from?"

Students who have had a similar experience described their visa interviews as "instant denial". They all attended certain Chinese universities.

It is not clear which educational institutions are covered by the proclamation, and the US State Department has indicated that the list of "entities" will not be made public. 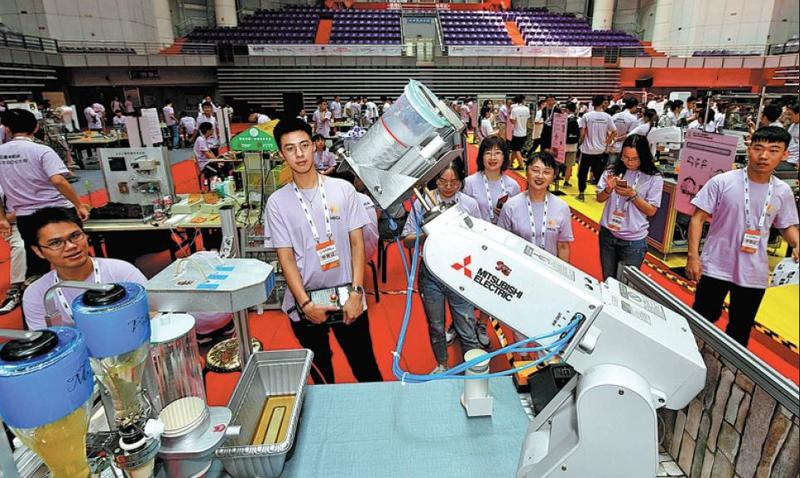 An automatic bartender made by students mixes cocktails during a competition at Harbin Institute of Technology, Heilongjiang province, in July 2019. (LIU YANG / FOR CHINA DAILY)

Mr Xiao said: "New cases are reported in the groups almost daily. One student had his visa revoked because he went to a high school affiliated to Northwestern Polytechnical University."

Another student, believing that only matriculated status at blacklisted entities would be considered, included a short-term exchange program at Harbin Institute of Technology in his visa application, which was refused because of this.

Another student, who wanted to be named only as Kerry, received his visa refusal last week. He attended the Harbin institute seven years ago.

The student, who has received a doctoral offer for an electronic engineering program with a full scholarship from the University of California-Davis, said he is the only candidate for the program. A letter was prepared for Kerry's visa application, requesting consular officials grant him a visa so he could start his research in the fall. His tutor also provided a letter, promising that he would monitor all Kerry's research activities.

Still, a visa officer rejected his application after confirming the university Kerry attended as an undergraduate. "I gave up other universities' offers for this program－otherwise, I would be at Kyoto University in Japan now and graduate next year," he said.

The presidential proclamation applies not only to students from the listed entities but also to scholars who receive funding from the China Scholarship Council.

Kerry said more than 2,000 students could have been denied visas, as there are five "10043 students" WeChat groups and each has reached the maximum number of 500 people.

An analysis in February by the Center for Security and Emerging Technology, or CSET, at Georgetown University in Washington suggests that the presidential proclamation could cover 11 civilian Chinese universities on the US Commerce Department's export control list. 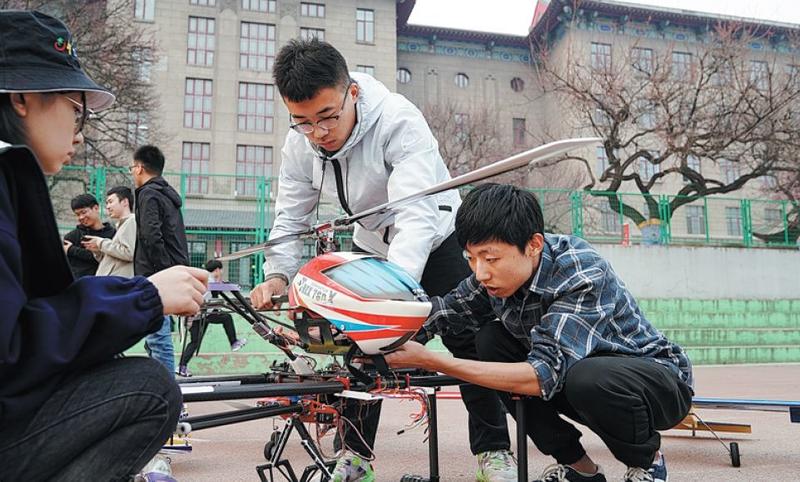 The analysis estimates that 3,000 to 5,000 Chinese students could be blocked each year, representing one-fifth of the annual new Chinese enrollments in US STEM (science, technology, engineering and mathematics) graduate programs.

The number of applicants denied visas could be much higher, as the CSET analysis points out that, due to a lack of data, there is no projection for the number of researchers who have been affected.

The authors of the analysis also acknowledge that the scope of the presidential proclamation is unclear, as it leaves several of the key terms and concepts undefined. For instance, it does not specify the criteria that will be used to judge which entities or fields are related to "Military-Civil Fusion strategy".

In a letter sent on May 26 to Secretary of State Antony Blinken, Wendy Wolford, vice-provost for international affairs at Cornell University in Ithaca, New York, said she has heard "a troubling series of recent visa denials", particularly in China, because of "unclear, localized interpretations" of Proclamation 10043.

"Consular officials are interpreting policies in an uneven and unpredictable manner that is creating tremendous uncertainty and confusion for international students and their US universities," Wolford said.

On June 10, Ted Mitchell, president of the American Council on Education, acting on behalf of more than 40 higher education organizations, requested a briefing from the State Department for a better understanding of the implications of Proclamation 10043 for international students and scholars. No update has been reported.

Mr Xiao said Chinese students now need to clear two hurdles to study in the US. The first is the consular official who determines visa eligibility, and the second is the Customs and Border Protection (CBP) officer who determines admissibility at a port of entry, he said.

CBP has stepped up airport screenings of Chinese researchers. Mr Xiao said his wife was detained at Los Angeles International Airport for five hours and questioned about her research as well as his. 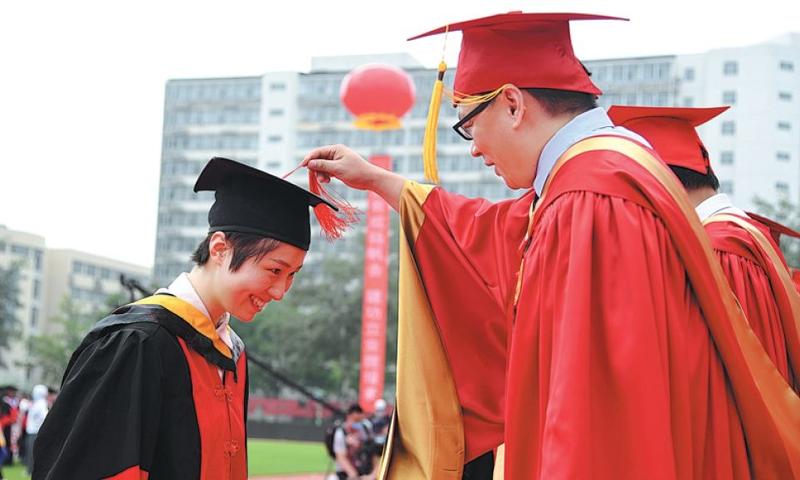 He said: "They told her my work is very important to the US and that if I wanted to enter the US, I must work for the US. My wife was so scared that she called me immediately after walking outside the airport. Her first words were, 'Don't come to the US, you'll be arrested'.

"I was shocked when I first heard that we were viewed as spies. I have never had connections with the military and do not qualify to approach the military."

Mr Xiao added that he is worried about his wife's safety in the US, as it's a "dangerous sign" that Chinese researchers are being targeted.

Kerry said he now has two options. He can attend online classes for the fall semester while waiting out the proclamation, or pursue philosophy doctorate studies in other countries. He is unlikely to go with the first option, as he will not get the scholarship if he cannot be in the US, and without the scholarship he cannot afford tuition and living expenses of about US$55,000 a year.

"I feel so helpless as a foreign student. We have become an easy target for the US government to score political points," he said.

Other students are taking legal action against Proclamation 10043. They have set up a website to promote awareness of the proclamation and are seeking support. In recent days, a GoFundMe campaign has raised nearly US$70,000.

A member of the campaign's core volunteer team, using the pseudonym Xiao Liu, said, "After consulting several lawyers, we were told we would need US$1 million for the lawsuit."

He enrolled in the computer science postgraduate program at New York University last year, but due to the pandemic, he has been attending online classes and has yet to apply for a visa.

Xiao Lu is a graduate of Beijing University of Posts and Telecommunications, which is also on the entity list. He said he knew of no student from his university being granted a visa for postgraduate study in the US, including non-STEM majors.

"The whole Chinese student community faces rising racism. We need to make our voices heard through this lawsuit," he said. "We know it will be a long process, and we are prepared for this fight."