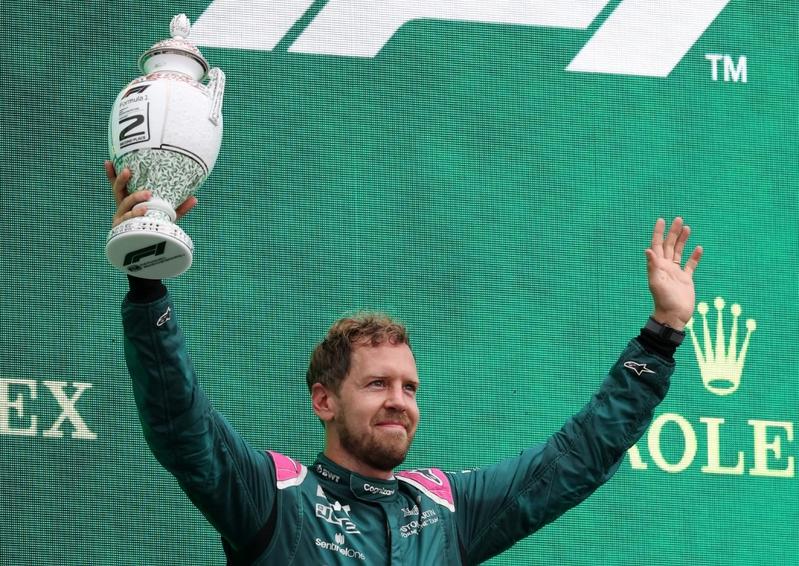 Second placed Aston Martin's German driver Sebastian Vettel celebrates on the podium after the Formula One Hungarian Grand Prix at the Hungaroring race track in Mogyorod near Budapest on Aug 1, 2021. (FERENC ISZA / AFP)

LONDON - Aston Martin will let the data decide whether they appeal Sebastian Vettel's disqualification from second place at the Hungarian Grand Prix, the Formula One team said on Monday.

Sebastian Vettel, a four-times world champion, was disqualified after the governing FIA was unable to extract the required litre of fuel from his car post-race

The decision has a bearing on the title battle between Mercedes' seven-times champion Lewis Hamilton, who stands to inherit second place in the race, and Red Bull's Max Verstappen who would move up to ninth.

"We are now analysing data in order to decide whether to appeal or not," said a team spokesman on Monday.

Vettel, a four-times world champion, was disqualified after the governing FIA was unable to extract the required litre of fuel from his car post-race.

Aston Martin gave notice of their intention to appeal at the Hungaroring on Sunday night and have a 96-hour window to decide whether to take it any further or accept the loss of 18 points.

"Since we had reason to believe that there was more than one litre of fuel in Sebastian Vettel's car after the Hungarian Grand Prix, we decided to reserve our right to appeal" said the spokesman.

Vettel's car has been sealed and impounded by the FIA, with Formula One about to start a three-week August break.

If Aston Martin do proceed, the outcome will also be closely watched by those further down the pecking order.

Former champions Williams scored their first points since 2019 on Sunday to go eighth overall and ahead of Alfa Romeo as well as Haas.

If Vettel is removed from the results, Williams would collect 10 points rather than six, a significant difference among tail-enders for whom every point is a struggle.

Haas principal Guenther Steiner, whose team have yet to score in 2021, was sceptical about the chances of any eventual appeal.

"Maybe in the procedure to get the fuel out, there is something," he told reporters on Monday. "If there was only that amount of fuel, it's black and white. There is nothing in-between.

"I don't know if there was an issue to take the fuel out and they couldn't get everything out..."

Aston Martin boss Otmar Szafnauer said there should have been 1.74 litres of fuel left and suggested a problem with a pump. The data will show how much fuel went in and how much was consumed.