By Daqiong and Palden Nyima in Lhasa

Following in her father's footsteps, Tibetan villager Drolkar has spent decades keeping an eye out for trouble at border 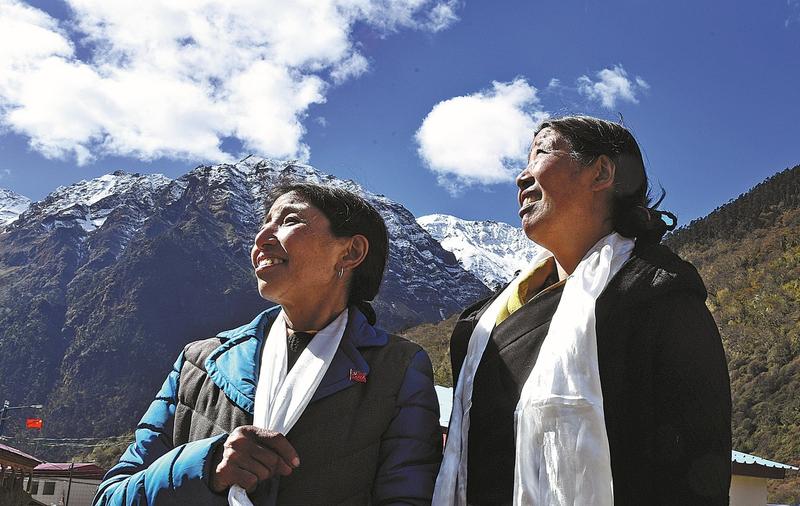 Drolkar is one of the recipients of the July 1 Medal, the highest honor conferred to outstanding members of the Communist Party of China.

As an ordinary Tibetan villager, she and her family have been guarding the country's territory for over three decades.

Drolkar is from Yulmai village in Lhunze county, Tibet autonomous region, which sits at the southern foot of the Himalayas and on China's border with India.

The 60-year-old has been on border patrol with her family since she was a child. At 35, she became a member of the CPC.

Every month, in addition to doing housework and herding, Drolkar spends one day patrolling the border.

From 1964 to 1996, Drolkar's hometown was considered China's smallest in terms of population. In fact, it was called a "three-person township" because during that time, only Drolkar, her father, Sangye Chopa, and her sister, Yangzom, lived there.

After Tibet's liberation in 1950, villagers, including Drolkar and her family, were relocated to new areas that were more suitable for living in terms of environment and climate. They were provided with new houses, livestock and grain.

Drolkar's family volunteered to return to the village not long after their relocation, although living conditions were poor and it was barely accessible, particularly between November and May when the mountain pathways were usually blocked by heavy snow. The family members were the only inhabitants and guardians of a township of 1,976 square kilometers.

Since their father died, Drolkar and Yangzom have kept patrolling the border.

While herding animals, they keep an eye out along the border and report suspicious activities such as smuggling.

In October 2017, Drolkar and Yangzom wrote a letter to President Xi Jinping while the Party was holding the 19th National Congress.

They told Xi about their experiences safeguarding the border and the development of their township over the years.

They received Xi's reply on Oct 28 that year. In the reply, he recognized their efforts to safeguard the territory and thanked them for their loyalty and the work they've done.

On June 29, Drolkar received the medal in Beijing.

"I was very pleased and excited to receive the award last month in Beijing," she said. "I am so glad that I was greeted with tashi delek (the Tibetan greeting during which best wishes are given) while I was presented with the medal by President Xi. I will never forget the moment.

"President Xi is very kind to us, and we are often told to do a good job safeguarding the border. Only if the border is stable, will Tibet be stable. I have been following in the footsteps of my father to patrol our motherland over the decades, and I regard the work as a big honor."

There are now more people living in the village supporting her efforts.

The "three-person township" expanded to one with 20 residents in 1999 and 30 in 2009. It is now a more well-off, beautiful place with more than 200 residents in 67 families. Villagers now take turns patrolling the border.

"The July 1 Medal is not only for me. It is for all the people of the area," Drolkar said. "We all feel proud."