New measures in pipeline to facilitate trade under RCEP 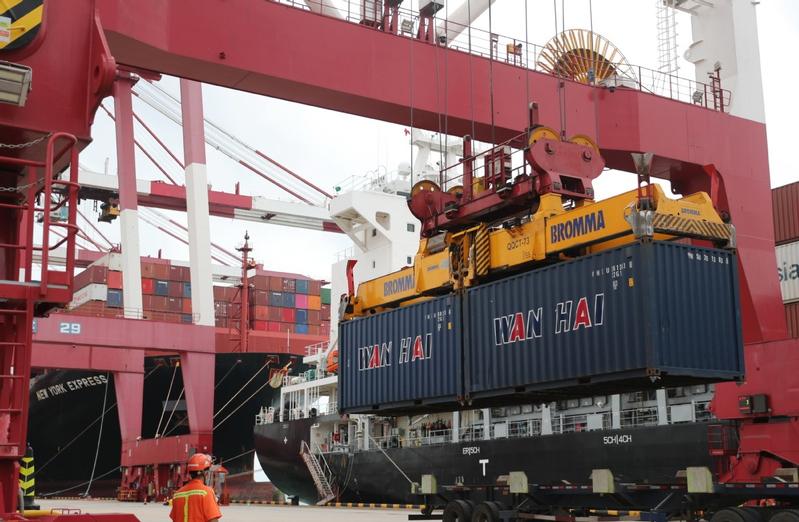 Containers are loaded onto a ship berthed at Qingdao port, Shandong province, on July 28, 2021. (ZHANG JINGANG / FOR CHINA DAILY)

The General Administration of Customs is working on a number of measures, including rules of origin of imported and exported goods, to help domestic companies cut costs and sustain trade under the Regional Comprehensive Economic Partnership framework, government officials said on Thursday.

As China and its partners advance the RCEP agreement ahead of its operation next year, the administration is also preparing to promulgate RCEP measures in the administrative measures for approved exporters, said Dang Yingjie, deputy director-general of the National Office of Port Administration at the GAC.

Rules of origin are the criteria needed to determine the national source of a product. Their importance is derived from the fact that duties and restrictions in several cases depend upon the source of imports. There is wide variation in government practices regarding the rules of origin, said the World Trade Organization.

ALSO READ: Trade and investment are set for bloc boost

Addressing a news conference in Beijing, the official said this measure will help China and its trade partners sort out procedures for applying preferential import and export visas under RCEP rules, and building a supporting information system to ensure convenience for companies to make proper declarations and enjoy the benefits.

Once it comes into effect, the RCEP will further promote the predictability, consistency and transparency of the application of Customs laws and regulations between China and other RCEP partners...

Dang Yingjie, deputy director-general of the National Office of Port Administration at the GAC

"Once it comes into effect, the RCEP will further promote the predictability, consistency and transparency of the application of Customs laws and regulations between China and other RCEP partners, and reinforce mutual coordination of the member economies in jointly advocating trade facilitation and making cross-border trade safer and more convenient," Dang said.

China's foreign trade with the 14 other RCEP members amounted to 10.2 trillion yuan (US$1.58 trillion) last year, accounting for 31.7 percent of its total foreign trade during the period.

Driven by soaring demand from participating RCEP economies, which are recovering from COVID-19 woes, and the fast growth in cross-border e-commerce, the members' total trade value surged 22.7 percent on a yearly basis, data from the GAC showed.

"This trend will deliver many strategic and commercial benefits to multinational companies in China and its partner economies in the coming years," said Guo Da, assistant president of the Haikou, Hainan province-based China Institute for Reform and Development.

He suggested the RCEP members further support pilot reforms introduced by relevant local governments in member countries, support the development of small and medium-sized enterprises, and practice economic and technical cooperation as soon as possible.

"It will be beneficial for members to keep working closely with relevant local authorities to bolster domestic and regional growth, including establishing RCEP innovation pilot zones or pilot demonstration zones and implementing transitional provisions so that more of its successful practice can be adopted among RCEP members," he said.

Eager to put China's foreign trade growth on a firmer footing, Huang Guansheng, director-general of the National Office of Port Administration at the GAC, said the government will continue to deepen its cooperation with all parties concerned to promote the role of Authorized Economic Operator, or AEO, agreements and other policy tools in boosting global trade. This will help companies resolve issues in both exports and imports, and encourage more domestic companies to join AEO certification programs.

The program was advocated by the World Customs Organization to strengthen international supply chain security and facilitate movement of legitimate goods. Under the program, Customs authorities from various regions form partnerships with the industry to collaboratively cut barriers to Customs procedures and enhance international trade efficiency.

China to date has signed AEO agreements with Customs authorities in 46 countries and regions to facilitate Customs clearance for companies.

The country had 28,473 AEO certification holders as of the end of June. Their volume of exports and imports accounted for about 53 percent of China's total foreign trade in the first half, according to Customs statistics.