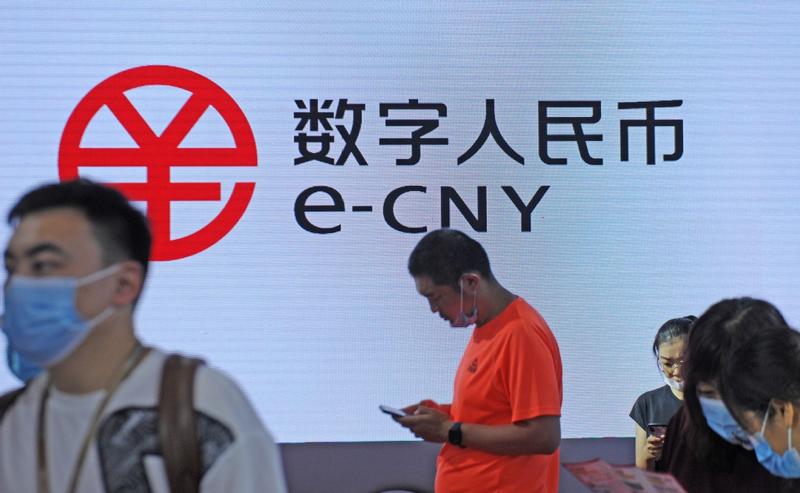 In this undated file photo, E-CNY is promoted during an expo in Dalian, Liaoning province. (PHOTO BY LYU WENZHENG / FOR CHINA DAILY)

E-CNY, the digital currency of China's central bank that is in the works, will further promote the process of renminbi internationalization once the RMB becomes the world's third-largest currency in terms of pricing, settlement and international reserves, experts said on Wednesday.

E-CNY, or the digital RMB, is currently undergoing tests through trials. Cross-border e-commerce payments could be the next key scenario for e-CNY use because it is "natural and particularly easy to accept", said Tu Yonghong, deputy director of the International Monetary Institute (IMI), which is part of the Renmin University of China.

Wei Benhua, former deputy director of the State Administration of Foreign Exchange, said that once the e-CNY is used in cross-border payments, it will likely have an impact on the reform of the international monetary system, besides helping promote the internationalization of the RMB.

That, however, would require the international community to achieve consensus on standards and rules for using the sovereign digital currency.

The People's Bank of China, the central bank, has stressed active participation in international communications and exchange of the legal digital currency, Wei said.

For its part, the PBOC confirmed recently it will explore pilot cross-border payment programs and also work with relevant central banks and monetary authorities in the rest of the world to set up exchange arrangements and regulatory cooperation mechanisms on the digital fiat currency.

According to IMI research, the RMB International Index (RII), an indicator of the internationalization level of the Chinese currency created by the institute in 2010, rose to 5.02 by the end of last year from 0.02 a decade ago.

The RII factors in aspects like pricing, settlement and international reserves. The index rose by 54.2 percent in 2020.

The IMI research showed that the RMB's international usage surpassed that of the Japanese yen and the British pound sterling in the first half of last year. This put the RMB behind only the US dollar and the euro for three consecutive quarters, including the last quarter of 2019.

A report based on the IMI research, published on Saturday, indicated the internationalization level of the RMB is mainly determined by the share of the RMB in global trade settlements earlier.

ALSO READ: PBOC: Preset timetable not in place yet for e-CNY launch

According to IMI research, the RMB's international usage surpassed that of the Japanese yen and the British pound sterling in the first half of last year. This put the RMB behind only the US dollar and the euro for three consecutive quarters, including the last quarter of 2019

Since 2015 when the currency was included in the International Monetary Fund's Special Drawing Rights, the RMB has been increasingly used in cross-border financial transactions.

So, financial transactions are an important driving force for the Chinese currency's internationalization, and overseas direct investments have promoted the RMB's global usage more than bank lending and bonds, said Tu.

According to the RMB Tracker of the Society for Worldwide Interbank Financial Telecommunication (SWIFT), as at the end of June, the RMB has retained its position as the fifth most active currency for global payments by value, with a share of 2.46 percent. Overall, RMB payments value in June surged 65.51 percent over the level in May.

The SWIFT announced on Wednesday that it launched a new service called Swift Go, which enables small businesses and consumers to send cross-border payments directly from their respective bank accounts to "anywhere in the world".

MYbank has also participated in the PBOC's e-CNY trials, which opened its digital wallet service for users through an app on mobile phones.

In the nation's first white paper on introducing the e-CNY, the central bank said one of its goals is to keep pace with international initiatives and explore the improvement of cross-border payments.

The internationalization of a currency is a natural result of market selection. The international status of a country's currency depends on its economic fundamentals and the depth, efficiency and openness of its financial markets, experts said.

So, though technically ready for cross-border use, the e-CNY is still used mainly in domestic retail payment trials.

China's central bank will actively respond to initiatives of G20 and other international organizations on improving cross-border payments, and explore the applicability of central bank digital currencies in cross-border scenarios, the PBOC said.