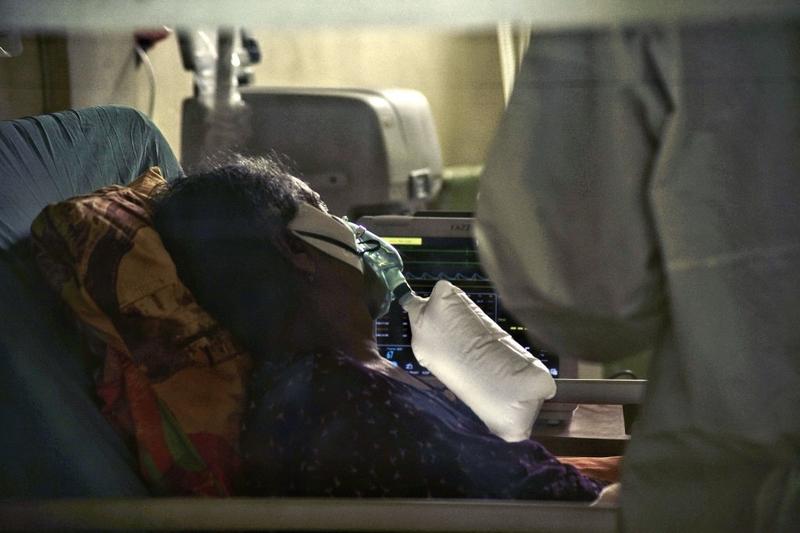 A COVID-19 patient is seen on oxygen at an intensive care unit at a hospital in Lhokseumawe, Aceh on July 7, 2021. (PHOTO / AFP)

Buckling under a Delta variant-driven wave of the virus, Indonesia has become Asia's COVID-19 epicentre with hospitals deluged, particularly on the densely populated island of Java.

"Deaths have risen due to a number of factors: full hospitals, patients admitted with low saturation, or dying unmonitored in self-isolation," Senior Minister Luhut Pandjaitan said in a statement late on Saturday.

Luhut, who oversees the COVID response on the islands of Java and Bali, said ICU capacities would be added in areas that have reported the highest fatalities.

Bali, famous for its tourist beaches and temples, has been grappling with oxygen shortages. read more

Indonesia last week reported record-high deaths on four separate days, the last of which was Friday's 1,566 fatalities, bringing cumulative deaths to more than 82,000. Total case infections have climbed to over 3.1 million, though health experts say both deaths and case numbers have been undercounted.

Just under 7 percent of its population of 270 million has been fully vaccinated. The debate over whether to loosen restrictions has pitted health experts, who say it is premature to ease curbs during a surge of infections, against employer groups that have warned of mass layoffs unless the curbs are relaxed.

Japan will begin accepting applications Monday for a COVID-19 passport that’s intended to allow vaccinated travelers to bypass some testing measures and restrictions.

The certificate will ease entry conditions for travelers heading to five countries -- Italy, Austria, Turkey, Bulgaria and Poland -- though initially won’t entitle people to avoid curbs on their return, the Nikkei newspaper reported Sunday, without citing any source. Japan will likely start using the passport for incoming travelers after the Tokyo Olympics end next month, according to the newspaper.

Thailand reported 15,335 new Covid cases, a new daily record, as the Southeast Asian nation battles the spread of the delta strain. A near two-week semi-lockdown, which has included an overnight curfew and the shuttering of shopping malls to gyms, has failed to halt the deadliest outbreak the country has experienced since the pandemic began.

A total of 129 fatalities were reported in the past 24 hours, the highest one-day tally in more than a week, official data showed Sunday. Almost half of the country’s about 4,000 deaths have occurred this month.

Australia has struck an agreement for 60 million additional Pfizer-BioNTech doses next year and 25 million doses in 2023, which would allow the country to offer booster shots, according to Prime Minister Scott Morrison.

The country, which has struggled to accelerate inoculation efforts, on Saturday reversed previous advice on AstraZeneca Plc’s vaccine. Authorities told adult residents in areas with current outbreaks, including Sydney, to seriously consider using the option.

Australia previously had recommended that only people aged 60 and above should use the AstraZeneca product, which has been linked to rare blood clots.

Turkey’s new coronavirus cases jumped to 12,381 on Saturday, the highest level since mid-May and nearly triple the low that was hit in early July, according to health ministry data, which also showed 58 people died due to COVID-19.

Infections remain well down from a wave in April-May when new COVID-19 cases peaked above 60,000. They fell to 4,418 on July 4 in the wake of a stringent lockdown that ended in mid-May. Most of the last restrictions were lifted this month.

Jordan will lower the age bar for getting the COVID-19 vaccine to 12 as of July 25.

Jordan's Health Minister Feras Al Hawari said that the vaccination will be optional to those aged between 12 and 18 based on their parents' approval, the state-owned Al Mamlaka TV reported on Saturday.

Meanwhile, the National Center for Security and Crises Management said the implementation of a new order obliging public sector employees to take the vaccine will start from August 5, Al Mamlaka TV reported. Those who have not been vaccinated against the COVID-19 should bring a negative PCR test to enter the workplace.

Jordan recorded on Saturday 485 new coronavirus cases and 15 deaths, bringing the total number of cases to 763,922 with the death toll rose to 9,948.

Malaysia’s Prime Minister Muhyiddin Yassi is preparing to face questions over the country’s handling of the pandemic, as parliament sits Monday for the first time this year.

A five-day sitting will debate Malaysia’s emergency declaration and consider penalties for breaching Covid protocols. Cases in the nation have more than tripled since January.

Israel's Ministry of Health reported 1,331 new COVID-19 cases on Saturday, bringing the tally in the country to 859,308.

The death toll from the virus in Israel rose by one to 6,458, while the number of patients in serious condition rose from 81 to 89.

The total recoveries from the disease climbed to 841,748 after 394 newly recovered cases were added.

Turkey on Saturday registered 12,381 new COVID-19 cases, raising its tally of infections to 5,587,378, according to its Health Ministry.

The pandemic has so far claimed 88,532 lives in Iran, up by 259 in the past 24 hours, the Iranian Ministry of Health and Medical Education reported.

A total of 3,239,172 people have recovered from the disease or been discharged from hospitals across the country, while 4,784 remain in intensive care units, according to the ministry.

The number of COVID-19 infections rose to 264,527 in Myanmar after 5,657 new cases were reported in the past 24 hours, according to a release from the Ministry of Health and Sports on Saturday.

With 297 new deaths, the overall death toll was recorded at 6,756 on Saturday, the release said.

A total of 4,228 patients have been discharged from hospitals on Saturday, bringing the number of recoveries to 181,249 so far.

The official data showed that 20,827 samples were tested in the last 24 hours as of 8:00 a.m. local time Saturday across Bangladesh.

The total number of recovered patients in the country stood at 988,339 including 9,723 new recoveries Saturday, said the DGHS.

According to the official data, the COVID-19 fatality rate in Bangladesh is now 1.65 percent and the current recovery rate is 85.69 percent.