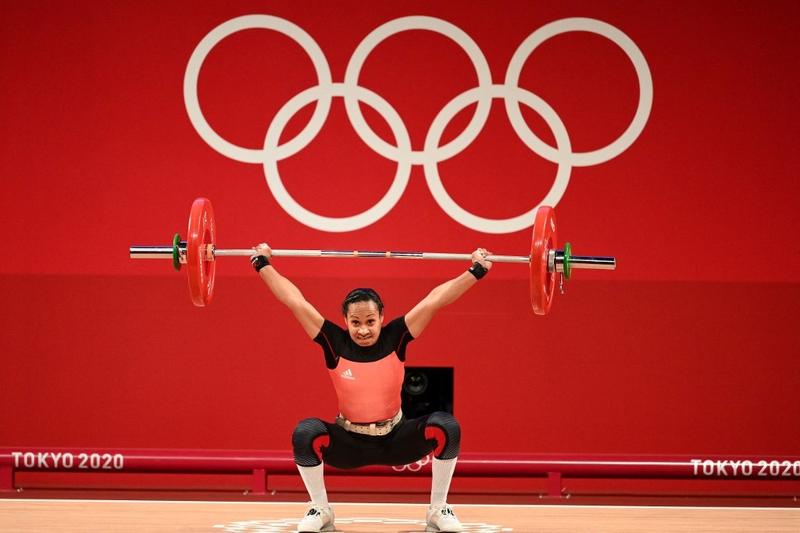 TOKYO - When women's weightlifting was introduced as an Olympic sport in 2000, Papua New Guinea's then 16-year-old Loa Dika Toua became the first-ever female Olympian lifter. On Saturday in Tokyo, the now 37-year-old athlete did it for the fifth time.

Coming from a family of weightlifters, Loa Dika Toua was encouraged to get involved in the sport by her aunt

Wearing her country's flag colours of red and black, Toua grabbed the bar with a scream, lifted 167 kg in total and smiled in joy, making a heart gesture with her hands at the television camera that she said was for her children.

"You can dream of attending one Olympics, and if you're lucky enough, you can make it to two. But I've made it to five Olympic Games, you don't even dream about this," Toua told Reuters at the Tokyo International Forum, site for the event, where she finished well outside the medal positions.

"This would have been my sixth, but in 2016 Rio Olympics I pulled out from the team to give my spot to my sister. Unfortunately due to financial constraints of the country, we couldn't send our team there."

Amid coronavirus restrictions, her achievement in returning to the Games after previously lifting in Sydney, Athens, Beijing and London was witnessed live by just a handful of journalists, judges, coaches and other athletes - an achievement nearly thwarted after she contracted tuberculosis in 2013.

Coming from a family of weightlifters, Toua was encouraged to get involved in the sport by her aunt.

"I had just turned 16 when I attended the Sydney Olympics, and it was nerve-wrecking. It was my third international competition ever and it was an amazing experience, being called an Olympian," Toua said.

"With weightlifting I travelled the world, made a name for myself, my family and my country."

At one stage after the tuberculosis diagnosis, Toua, who has yet to win an Olympic medal, considered retiring from the sport.

"I never told anyone this, but when I was in hospital I sort of gave up on weightlifting. I guess that was the worst time for me," said Toua, who was her country's national flag bearer at the Athens 2004 Olympics opening ceremony.

"I am so proud of this moment, I hope the young girls in my country follow my footsteps."

Asked about the next Olympics in Paris in 2024, Toua said: "I am not getting any younger. But backstage in the warmup room, all the other athletes joked: 'See you in Paris, Dika!'"