Zhengzhou gets over flood, but Xinxiang faces troubles

By Hou Liqiang in Beijing 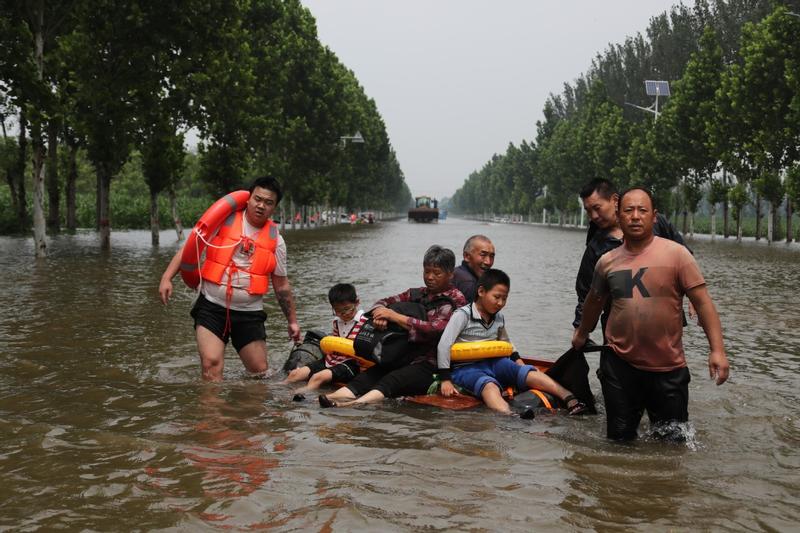 While Zhengzhou, the capital of Henan province, is expected to get life back to normal soon after the deadly floods, the situation in the nearby city of Xinxiang has been turning grim as ongoing downpours swelled local rivers and caused a dam breach in one location.

The widespread flooding has led to the relocation of almost 396,000 people, local authorities said on Friday in a news release

As of Friday, the disaster had claimed at least 56 lives in the province and five people remain missing. The direct economic losses caused by the torrential rains in Zhengzhou have climbed to 65.5 billion yuan (US$10 billion).

The widespread flooding has led to the relocation of almost 396,000 people, local authorities said on Friday in a news release.

With the support of thousands of people from other parts of the nation, the operation of many facilities paralyzed by the torrential rainfall is expected to be restored over the weekend, said the city's government.

It said that, together with 5,290 soldiers, 30,000 police officers, 164,000 volunteers and over 400,000 officials and Communist Party of China members, over 5,000 rescuers from outside Henan are working in the forefront of disaster relief work in the city.

The city has seen its communications system essentially restored. It is expected to completely resume the water supply on Sunday and restore the operation of all tunnels and flyovers in the small hours of Saturday.

With the help of over 10,000 technicians from 24 provincial-level regions across the country, 3,600 employees of local power grid companies will restore the power supply on Saturday.

However, Xinxiang was still struggling on Friday to cope with ongoing torrential rains, which had triggered a flood control alert in several rivers and left some villages isolated.

The downpours left the Weihe River swollen. Despite intensive efforts lasting for about five hours, local flood control personnel failed to block a culvert where a leakage occurred in a section of a dam in Hebi, which developed into a dam breach at 10 pm on Thursday, according to the Ministry of Water Resources.

It said rescuers have been making continuous efforts to block the breach, the width of which decreased from 15 meters at its highest to 10 meters on Friday.

The ministry said at least 230,000 people have been relocated from their home areas, as these have been designated to temporarily store floodwaters.

"With the help of these storage areas, the water levels in trunks of the Weihe and Fuyang rivers have been effectively reduced, greatly relieving downstream areas from flood control pressures," it said.

It said no casualties have so far been reported in the area.

A team headed by Zhou Xuewen, secretary-general of the State Flood Control and Drought Relief Headquarters, has arrived in Xinxiang to guide local disaster relief work, according to a media release from the Ministry of Emergency Management.

All residents in affected areas should be relocated. "Not a single person should be left behind," the release said.

The team, consisting of officials from four central government bodies, including the National Health Commission, also pledged to dispatch daily necessities and other materials in a timely manner to meet local people's needs.

The Ministry of Emergency Management sent another 1,200 firefighters from other regions on Thursday night and on Friday to join the disaster-relief efforts in Henan.

To date, over 3,000 firefighters from 10 provincial-level regions, including Beijing and Shanghai, have been sent to take part in the flood control effort in Henan, it said.

While rains with precipitation of up to 300 millimeters were forecast to affect western Henan from Friday morning to Saturday morning, the national observatory forecast no more rainfall in the province on Saturday and Sunday.

As torrential rains abate in Henan, however, many areas in eastern China are expected to be hit by downpours brought by Typhoon In-Fa.

China's national observatory on Friday morning issued an orange alert for In-Fa, which has become a strong typhoon and is expected to make landfall in eastern China's Zhejiang province from Sunday afternoon to early Monday morning.

China has a four-tier color-coded weather warning system, with red representing the most severe warning, followed by orange, yellow and blue.

In the 24 hours starting from 2 pm on Friday, up to 300 millimeters of rain are forecast to fall in Shanghai, eastern parts of Zhejiang and most areas in Taiwan province, it said.