By Tan Yingzi in Chongqing, Xing Yi in Shanghai and Zhang Xiaomin in Dalian, Liaoning 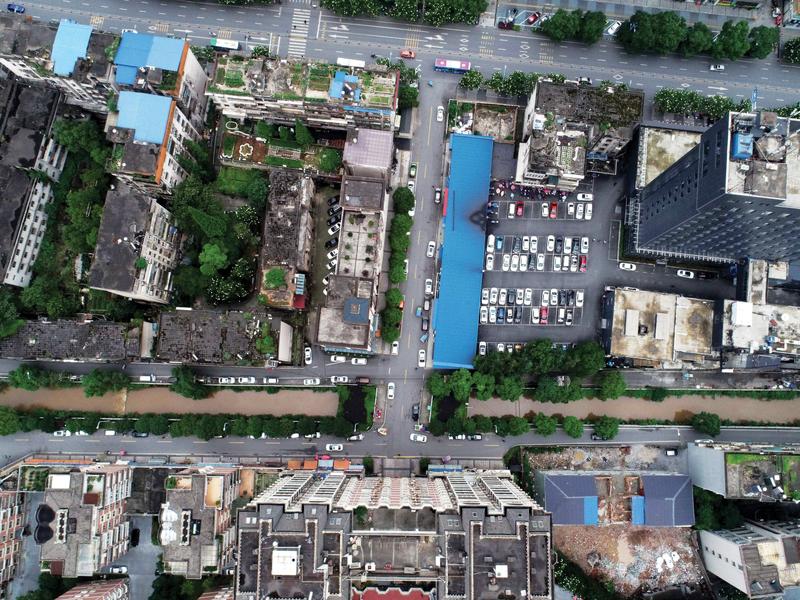 Frequent flooding is no longer a problem in this area of Pingxiang, Jiangxi province, after completion of sponge city construction. (PENG ZHAOZHI / XINHUA)

Flooding is one of the most serious water-related issues in Chinese cities due to rapid urbanization, land-use changes and the disappearance of natural wetlands.

To cope with such problems, the nation turned five years ago to the concept of building “sponge cities “on a globally unprecedented scale.

In 2015, the State Council, China’s Cabinet, launched the Sponge City pilot project, in which 30 metropolises are taking part.

The aim of the project is that by 2030, some 80 percent of urban areas should absorb and reuse at least 70 percent of rainwater, according to guidelines issued by the State Council in October 2015.

Qu Jiuhui, an academician at the Chinese Academy of Engineering, said the concept of a sponge city is the Chinese version of low-impact development, which is common in North America.

“It refers to the management of rainwater runoff so that this water can be stored, used and channeled like a sponge,” Qu said.

“It can solve the problem of too much rainwater flowing into the drainage system, and through eco-engineering, plants can also absorb pollutants and purify the water, as in nature.”

Eco-engineering refers to the application of ecological principles to shape and manage the environment, in tandem with the design and use of technology that minimizes damage to the environment, or that actively helps to protect or sustain it.

A multi-layered array of artificial holes and pores at the entrance to the Shanghai Lingang Sponge City Exhibition Center showcases the sponge city concept.

Sitting beside the Dishuihu, a 5.6-square-kilometer artificial lake, the center’s role is to explain the complicated concept of eco-engineering and urban planning to deal with flooding in big cities. 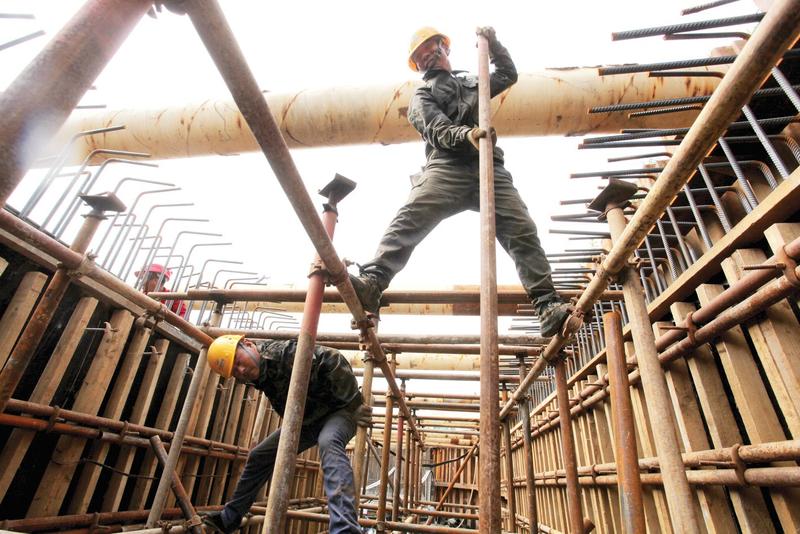 Lingang New City, located on the coast in Shanghai and which covers about 100 sq km, was selected as a pilot sponge city by the central government in 2016. Among the 30 pilot cities nationwide, it is the largest.

The exhibition center, which was unveiled last year, has set out to demonstrate how the sponge city concept has been translated into tangible infrastructure in the new city.

In the past three years, grass ditches, water-absorbent sidewalks, garden rooftops and artificial wetlands and water pools have been created to store rainwater.

Some 36 km of roads have been renovated and concrete sidewalks replaced with water-absorbent bricks to reduce water pooling during heavy rainfall. Instead of going directly to drainage, the bulk of the rainwater is absorbed by the soil in grass ditches alongside the roads.

The construction standards used were written into the regulations being applied to real estate development in the city’s new neighborhoods.

Yu Xiang, director of the center, said local people had asked why holes had been dug in their neighborhoods and whether the sponge city was effective.

“Since the sponge city was constructed in Lingang, the flooding issue has been addressed significantly, the environment has been improved and these questions are no longer being asked,” she said.

Parks and universities are also important parts of the pilot program.

Luchaogang Park, a sponge park, opened to the public in Lingang in September last year. The site’s original ponds were retained, with rainwater channeled to them for storage. 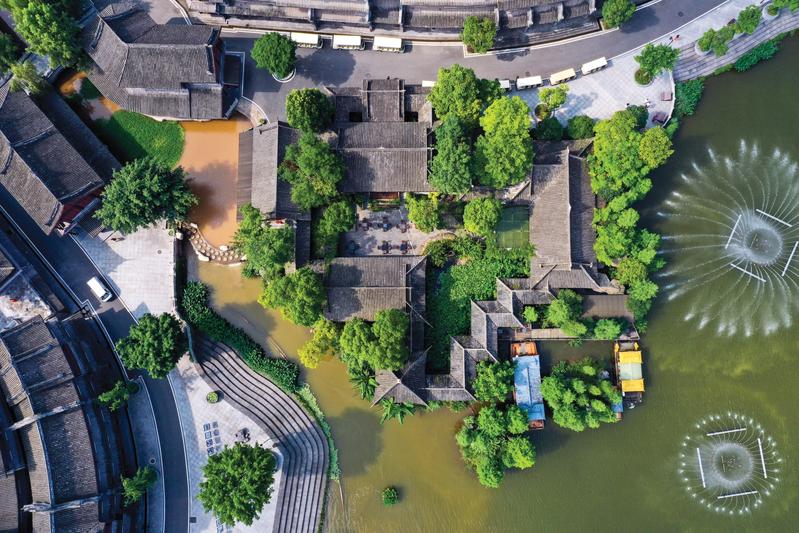 A bird’s-eye view of a park in Bishan district, Chongqing, which has benefited from the sponge city project. (LIU CHAN / XINHUA)

The campuses at higher education institutions in Lingang, including Shanghai Ocean University and Shanghai Dianji University, have been renovated.

The aim is to ensure the district’s roads are free from flooding — even in the event of rainfall on a scale seen only once every 100 years. Water quality in rivers will be improved and the urban heat-island effect reduced.

Duan Jin, an academician at the Chinese Academy of Sciences who took part in drawing up the master plan for the core area of the Yangtze River Delta demonstration zone, said the sponge city concept would be implemented in the zone.

Covering 2,300 sq km on the lower reaches of the Yangtze, the zone is a pilot green development and regional integration project for parts of Shanghai and neighboring Jiangsu and Zhejiang provinces.

“The area has a large and intricate network of waterways, so building sponge cities is a basic requirement to avoid urban flooding,” Duan said.

Meanwhile, the southwestern metropolis of Chongqing has witnessed rapid development in sponge city construction and is looking for ways to solve water problems in urban areas of West China.

By the end of last year, a sponge city covering just over 42 sq km had been built in the Liangjiang New Area, Wanzhou and Bishan districts and Xiushan county, according to the municipal Commission of Housing and Rural and Urban Construction.

In the coming years, all construction in Chongqing’s main urban areas must meet sponge city standards, according to the local authorities.

Jin Junwei, deputy head of the Chongqing Sponge Engineering and Technology Center, said that in recent years concerns have arisen in many Chinese cities over water pollution, water shortages and flooding.

“The concept of a sponge city is a Chinese adaptation of international water management techniques. The goal is to manage flood risks, treat the water and control the use of resources while creating a pleasant living environment,” he said. 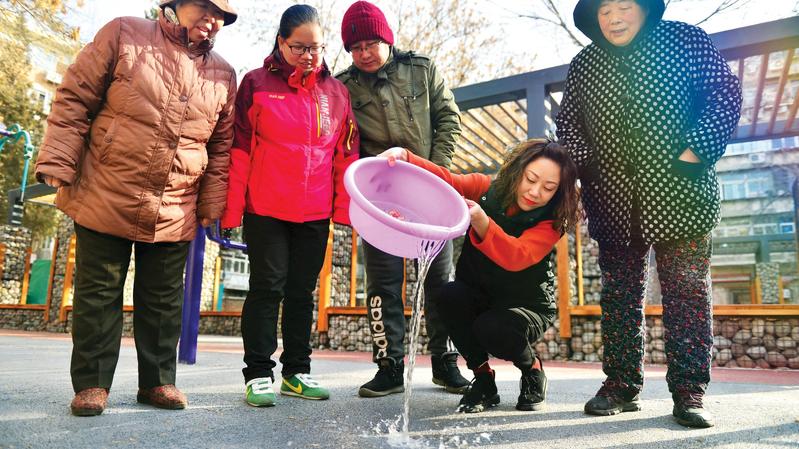 A Tianjin resident pours water which is absorbed by the road as part of sponge city construction. (HU LINGYUN / FOR CHINA DAILY)

Chongqing’s annual rainfall exceeds 1 meter, the bulk of which falls in summer and autumn. Due to its complex landscape, the city faces challenging issues such as flood control and drainage.

The quality of water flowing through Chongqing, which is situated on the upper reaches of the Yangtze, is not only important to the city itself, but also to many other parts of the country.

The Yangtze, the world’s third-longest river, flows 6,300 kilometers from the glaciers of the Qinghai-Tibet Plateau east through Chongqing, Wuhan, capital of Hubei province, and Nanjing, capital of Jiangsu, before reaching the East China Sea in Shanghai.

More than 400 million people get their drinking water from the river, and water security has become a major national development issue.

Situated in Chongqing Liangjiang New Area, Yuelai New City, which covers 18.67 sq km, was one of 16 sponge cities on a national pilot list of climate-resilient urban designs released in 2016.

Yang Ping, deputy general manager of Chongqing Yuelai Investment Group, said: “During heavy rainfall, the water is absorbed by porous bricks and by plants to prevent flooding. We collect and store most of it, then use the water for irrigation or cleaning.

“The roof of a huge exhibition hall features a special rainwater collection path. Before the water flows into a pipe, we use a special device to purify it for the first time before directly discharging it into wetland through the pipe,” he added.

Surplus water is purified again and discharged into six reservoirs. Yang added that the company has been able to save 600,000 yuan (US$89,105) in water charges every year.

Chongqing is also the first of China’s 30 sponge cities to have a smart stormwater control system.

This digital urban drainage system has been developed by Suez, one of the world’s leading water and waste management companies. It is used to monitor, analyze and predict the operating status of rainwater drainage, urban flooding risks, ecological effects and methods to reuse rainwater. The system also calculates and reports on how a sponge city performs against a set of key indicators. 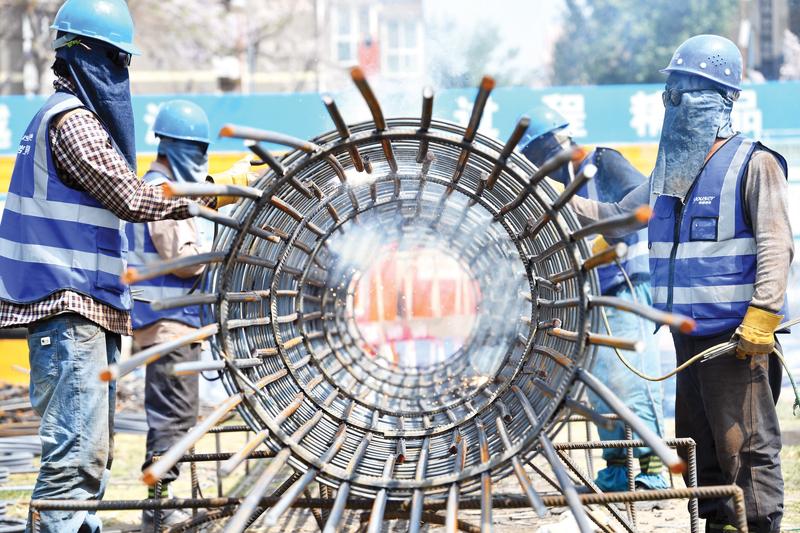 According to Suez, by consolidating and analyzing this data, the software will protect against the risk of flooding and also limit pollution on the Yangtze.

In January 2018, the first phase of the Yuelai Sponge City Monitoring and Information Platform project was completed and started trials. It will be extended to other parts of the Liangjiang New Area.

In 2016, approval was given for Zhuanghe, a county-level city in Dalian, Liaoning province, to be included in the second group of pilot cities receiving central government financing for sponge city construction.

Covering 21.8 sq km, the Zhuanghe pilot area lies in the south of the city on the lower reaches of a three-river estuary.

“The construction of a sponge city has brought real benefits, with the rivers becoming cleaner and the environment improving,” Zhu said.

In 2018, nearly 1,000 relict gulls, a rare and little-known species, were attracted to and spent the winter in Zhuanghe for the first time.

Zhu said that in summer last year, the population of black-faced spoonbills, one of the world’s most endangered species, reached a record 165 in Zhuanghe.

In late August, under the influence of Typhoon Bavi, the eighth of the year, rainfall in Zhuanghe reached 131 millimeters in a single day. However, there were hardly any problems, including flooding, in the sponge city construction area.

In constructing a sponge city, Zhuanghe, a typical county-level city in Northeast China, faced difficulties such as weak management and a shortage of capital and human resources.

Zhuanghe learned from the first group of sponge city pilot projects how to set up new systems, bid for projects, and construct and design infrastructure, thus avoiding many problems, Zhu added.

The city also launched an innovative sponge city planning system and top-level design framework as well as put forward the concept of building an “energy-saving sponge city”, which has been widely promoted among small and medium-sized cities in Northeast China and those in coastal areas.

In 2017, Itazawa took part in setting up a joint venture in Dalian.

Itazawa, president of the Dalian Deta-Shinwa Environmental Science and Technology Development Co — based in the Dalian section of the China (Liaoning) Pilot Free Trade Zone — said that in many parts of China, there is a shortage of water resources and that control and drainage problems persist during the flood season.

Bricks that retain and filter rainwater have been particularly effective in resolving such issues, he said.

Itazawa added that such bricks produced by his company for use on roads have been a highly popular element of sponge city construction.

He said this construction should involve long-term preparation and technical resources, adding that it took Japan 50 years to control its water system, illustrating just how hard and long-term such work is.