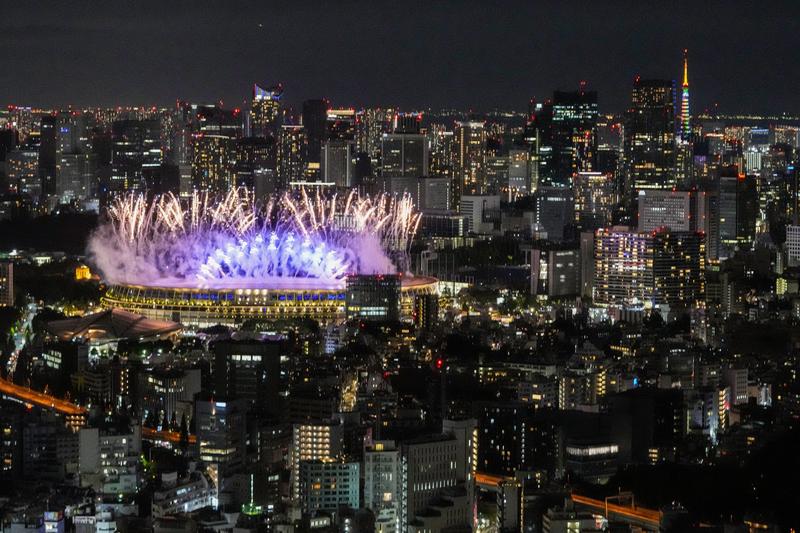 Fireworks illuminate over National Stadium during the opening ceremony of the 2020 Tokyo Olympics, July 23, 2021, in Tokyo. (KIICHIRO SATO / AP)

TOKYO - Japan's global superstar Naomi Osaka on Friday lit the Olympic cauldron to mark the start of Tokyo 2020, in an opening ceremony shorn of glitz and overshadowed by a pandemic but defined by hope, tradition and gestures of diversity.

Postponed by a year due to the coronavirus, the Games are being held without spectators in a city under a COVID-induced state of emergency, as many other parts of the globe also still struggle with a resurgence of cases.

Athletes, the vast majority wearing masks, paraded through an eerily silent National Stadium where flagbearers for the first time were both men and women. 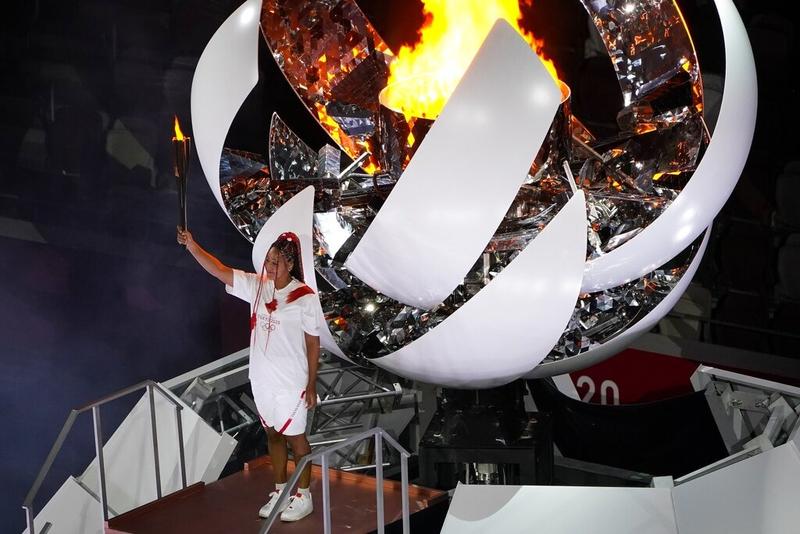 Naomi Osaka lights the Olympic cauldron during the opening ceremony at the Olympic Stadium at the 2020 Summer Olympics, July 23, 2021, in Tokyo. (MORRY GASH/AP)

In its journey through the stadium, the torch was passed from Olympic champions to baseball legends, a doctor and a nurse, a Paralympian, and children from parts of Japan hit badly by the earthquake and tsunami of March 2011.

I have no words to describe the feelings I have right now but I do know I am currently filled with gratefulness and thankfulness.

It was finally handed to Osaka, the 23-year-old four-time tennis grand slam champion whose background as the daughter of a Haitian man and Japanese woman reflects the changes and slowly growing diversity coming to a once ethnically homogeneous country.

"Undoubtedly the greatest athletic achievement and honor I will ever have in my life," Osaka wrote in a tweet. "I have no words to describe the feelings I have right now but I do know I am currently filled with gratefulness and thankfulness." 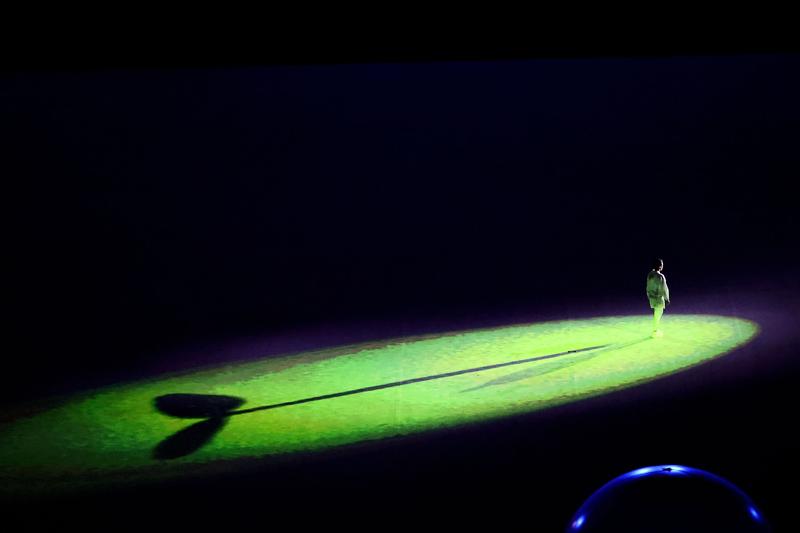 An artist performs during the opening ceremony of Tokyo 2020 Olympic Games at the Olympic Stadium in Tokyo, Japan, July 23, 2021. (LAN HONGGUANG/XINHUA)

Thomas Bach, the president of the International Olympic Committee, said in his opening speech addressing the athletes: "The lesson we learned is we need more solidarity - more solidarity among societies, and solidarity within societies."

But the shift towards greater inclusiveness has not come without stumbles. Tokyo 2020 has been hit by a string of scandals, including the exit of senior officials over derogatory comments about women, Holocaust jokes and bullying. 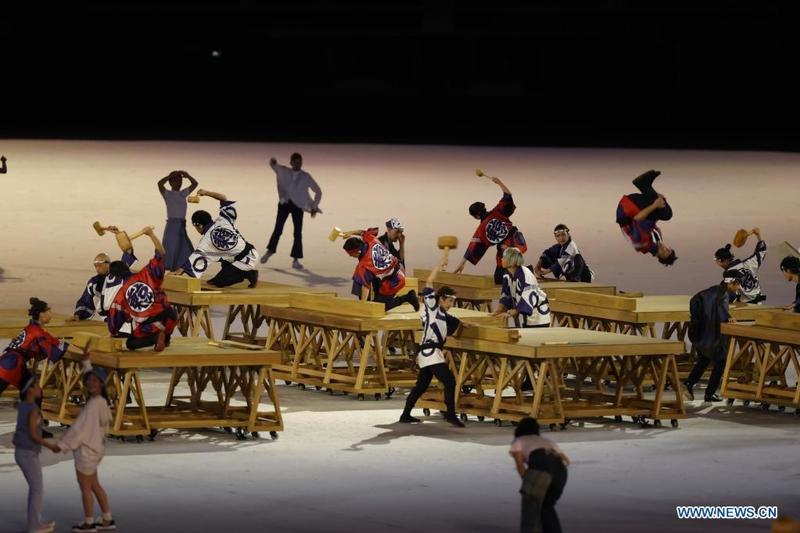 Artists perform during the opening ceremony of the Tokyo 2020 Olympic Games at the Olympic Stadium in Tokyo, Japan, July 23, 2021. (FEI MAOHUA/XINHUA)

Normally a star-studded display teeming with celebrities, the ceremony was low-key, with fewer than 1,000 people in attendance, strict social distancing rules and signs calling on spectators to "be quiet around the venue."

Opening with videos showing empty streets around the world and an athlete training alone in darkness, it also included drones hovering over Tokyo's National Stadium in the shape of the Olympic logo morphing into planet earth and a global performance via videolink of John Lennon and Yoko Ono's "Imagine". 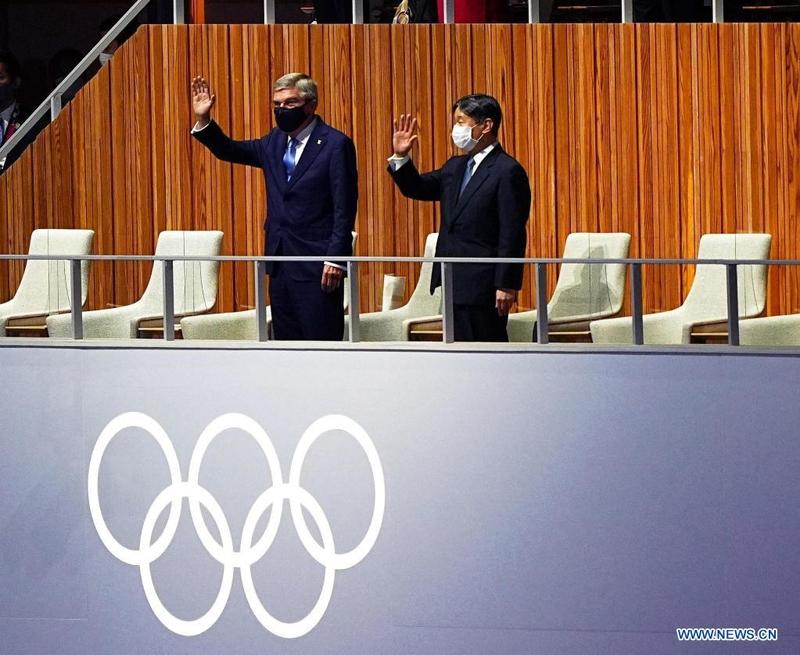 "With the world in a tough situation because of the coronavirus pandemic, I would like to pay my respect and express my gratitude to medical workers and all those who are working hard every day to overcome the difficulties," said local organising committee President Seiko Hashimoto.

The ceremony climaxed with a fusion of traditional kabuki theatre - with its elaborate makeup and costumes - and a jazz piano improvisation, on a stage topped with the cauldron for the Olympic flame.

At the parade, most countries were represented by both male and female flagbearers in an Olympic first, but not everybody stuck to pandemic protocols. In an awkward contrast to most other athletes, teams from Kyrgyzstan and Tajikistan and Pakistan's flagbearers paraded maskless. 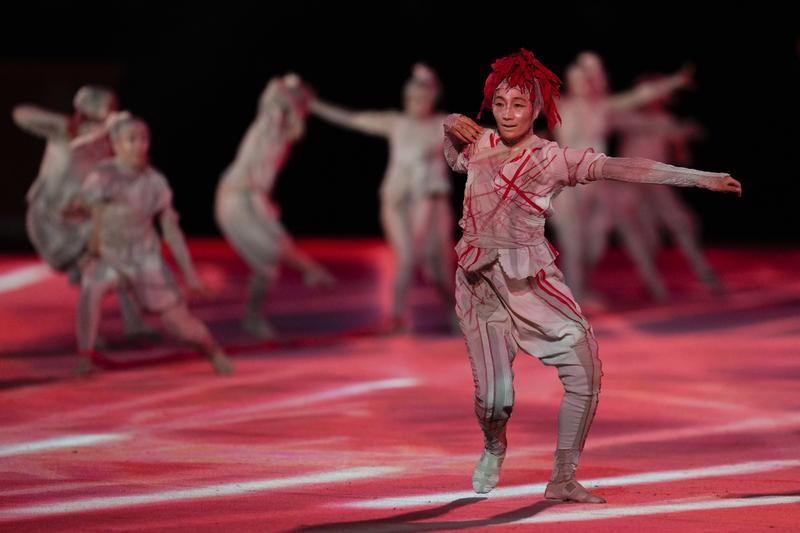 Dancers perform during the opening ceremony in the Olympic Stadium at the 2020 Summer Olympics, July 23, 2021, in Tokyo, Japan. (NATACHA PISARENKO / AP)

The opening also featured fireworks in indigo and white, the colors of the Tokyo 2020 emblem, and gave a nod to Japanese tradition represented by giant wooden Olympic rings linked to the 1964 Games, which the city also hosted.

Some delegations enlivened the mood. Uganda, wearing bright traditional costumes, did a few measures of a dance, while Argentine athletes jumped up and down on entering.

A moment of silence was held "for all those family and friends we have lost," especially to COVID-19. The Israeli athletes slain at the 1972 Munich Games were also remembered.

Japanese Emperor Naruhito and Bach, both masked, cheered on the athletes after bowing to each other before sitting down. 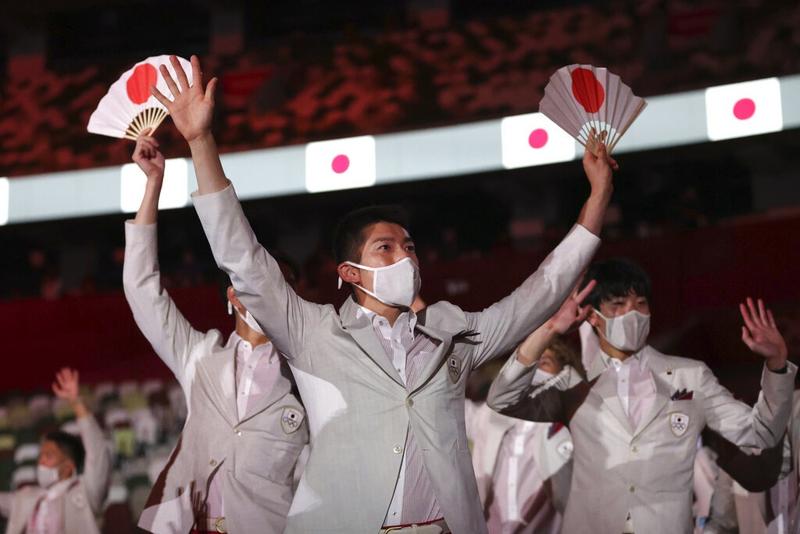 Members of Team Japan arrive during the opening ceremony in the Olympic Stadium at the 2020 Summer Olympics, July 23, 2021, in Tokyo, Japan. (HANNAH MCKAY / POOL PHOTO VIA AP)

"Today is a moment of hope. Yes, it is very different from what all of us imagined. But finally we are all here together," said Bach.

Only a third of Japanese have had even one dose of vaccines, prompting worries the Games could become a super-spreader event

Unlike his grandfather who opened the 1964 Games with a Japanese word that means "congratulations," Naruhito opted for a more neutral word in Japanese that is closer to "commemorate".

The ceremony was marked by major absences, including former Prime Minister Shinzo Abe, who wooed the Games to Tokyo. Top sponsors also stayed away, highlighting strong opposition to the event within COVID-fatigued Japan.

Only a third of Japanese have had even one dose of vaccines, prompting worries the Games could become a super-spreader event. More than 100 people involved with the Olympics have already tested positive. 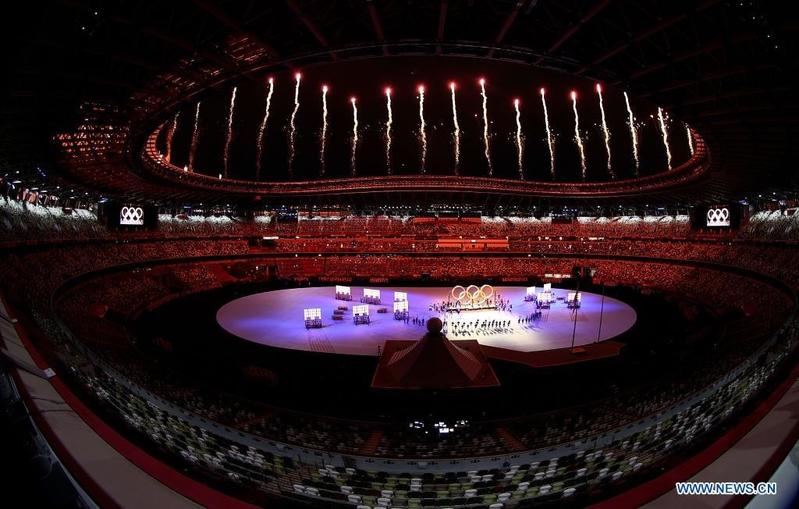 Hundreds of people protested around the venue, and a recent poll showed 55 percent of respondents saying they opposed the event going ahead, with 68 percent expressing doubt about the ability of Olympic organizers to control coronavirus infections.

But not everyone was opposed.

"It's a difficult time. But when I think about the feelings of those athletes who have been prepared for this competition, I really want the Games to be held even without spectators," said 54-year-old Tokyo resident Hideko Kobori, who watched the opening ceremony with her husband and three children at home.