The award-winning television production The Age of Awakening has captivated audiences on the Chinese mainland and in Hong Kong. The 43-episode series is being aired in the special administrative region as Chinese people witness the re-emergence of a united and powerful nation. Kathy Zhang reports from Hong Kong. 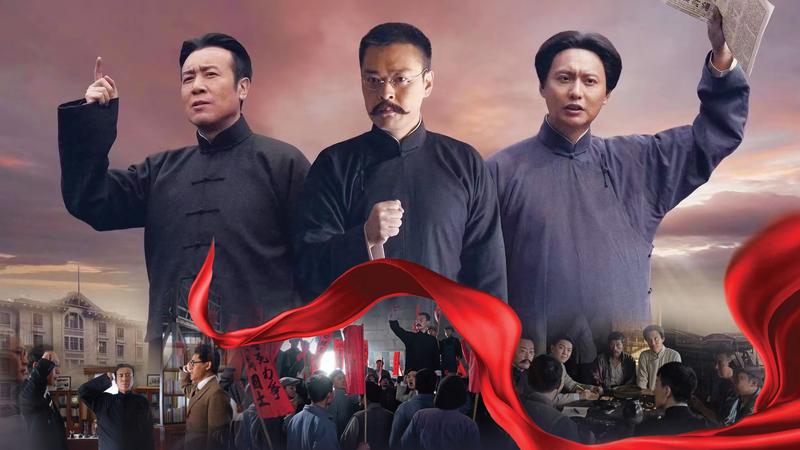 China was in the throes of a historic reckoning with its imperial legacy at the turn of the 20th century as it confronted foreign imperialist forces armed with powerful weaponry and knowledge hitherto unknown in the Middle Kingdom.

A historical television production that captures the country’s great upheavals and revolutionary history, especially the founding of the Communist Party of China in 1921, has enthralled audiences nationwide, including viewers in the Hong Kong Special Administrative Region.

The Shanghai Television Festival’s Magnolia Awards winner The Age of Awakening was a major hit when it made its debut on the mainland earlier this year, having a positive effect on the education of younger Chinese about the nation’s revolutionary struggle.

The Age of Awakening held the Top 2 spots in weekly prime-time viewership ratings for consecutive 6 weeks in its first run on the mainland. During those 6 weeks, it topped the list 4 times

Nixie Lam Lam, who is a member of the Youth Development Commission of Hong Kong, watched four episodes of the production online in one sitting after viewing the first episode when the series premiered in Hong Kong on i-Cable’s entertainment channel on July 12.

“I’m impressed by the lively characteristics of every protagonist in the drama, as well as the plots, anecdotes and tender emotions of these famous historical figures,” Lam said.

The drama narrates how Chinese intellectuals and young people in the early 1900s, including key CPC founders Chen Duxiu and Li Dazhao, strove to salvage a nation convulsed with corruption, foreign aggression, and other setbacks. It became an instant hit when it was first aired on the mainland in February, garnering 9.3 out of 10 points on the popular mainland film-review platform Douban, with nearly 270,000 users saying they had watched the series. The show attracted more than 2.76 million views on YouTube after state broadcaster China Central Television put the entire series online in mid-June.

On the English-language website MyDramaList, where Asian drama and movie fans rate and discuss films, The Age of Awakening scored 9.1 out of 10 points, which is rare for a historical Mandarin production.

In a 1,500-word review of the drama, a netizen said the production is totally unlike a “dry political lesson” as many had expected. “It is surprisingly light despite the chaotic historical background. The humor is fairly natural, and the characters are mostly very smart although they argue a lot.”

The most enjoyable part is seeing many brilliant debates among the characters with various political philosophies in the series, the netizen wrote.

The Age of Awakening is among a string of mainland movie and drama productions that have aired in the SAR this year. The film 1921 grossed almost HK$2 million (US$257,000) at the box office when it premiered in Hong Kong this month. Director Zhang Yimou’s spy thriller Cliff Walkers raked in almost HK$ 3.7 million at Hong Kong theaters in two months, while the time-travel comedy Hi, Mom scored 4.3 out of 5 points on the popular app, HKMovie.

“These movies and TV dramas have provided a new impetus for the city’s film and TV industries, which have been hard hit by the COVID-19 pandemic since last year,” Hung told China Daily.

According to Hong Kong Box Office Ltd, local cinemas saw their revenues plummet by more than 72 percent to HK$537 million last year, down from HK$1.92 billion in 2019.

As audiences head back to the cinemas, the once-thriving industry has to deal with long-standing problems, including the lack of innovation, as well as broader and more plural subject matters, Hung said, adding the “new impetus” is exactly what the industry needs now.

In his view, the social value of historical films or television dramas is greater than monetary or entertainment value. Previously, the movie industry had barely touched on the subject of patriotism, and Hong Kong residents, to some extent, didn’t dare talk about patriotism or the CPC. “This isn’t what things are supposed to be in the SAR,” he said.

“As the CPC’s role is indispensable to China’s modern history and ‘one country, two systems’, why can’t people talk about it in public?” Hung said.

He urged Hong Kong people to face up to history and create an open, rational and plural environment to discuss the history of the nation and the CPC, while historical films and TV dramas give people the “starting point” to do so.

Hong Kong resident Eva Yang, director-general of a Hong Kong-based war veterans society, is also an avid fan of The Age of Awakening.

Yang’s grandfather joined China’s War of Resistance against Japanese Aggression (1931-45) in Guangzhou, Guangdong province, in the early 20th century. She said these veterans and their relatives have always been proud of fighting for the nation.

However, as time passed, Yang and other members of the society are worried that Hong Kong’s young generation will gradually put the nation’s history behind them. “History should not be forgotten,” she told China Daily.

Yang said that good dramas and films like The Age of Awakening could stimulate young people’s interest in the history of nation and the city, and help them to know more about what has given Hong Kong its stability and prosperity.

She hopes that more stories about China’s resistance war against the Japanese occupation, especially Hong Kong’s contributions to the nation’s victory in the war, can be written and adapted for stage performances, film and television.

Hung also cited the United States, which has the world’s largest film industry in terms of revenue, as having successfully portrayed a large number of American heroic figures in films with its wars in Vietnam and Afghanistan as backdrops.

Chinese movies should have our own heroes to tell Chinese people’s stories, he said. Hong Kong’s film industry should leverage its own advantages through decades of experience and complete networks around the world to help domestic films enter overseas markets.

Hung is confident about the industry’s future following the recent string of mainland-produced historical films and TV productions being shown in the SAR. Hong Kong can see the way ahead, and some local film producers and issuers will begin working on similar themes.

He said a number of touching and inspiring stories concerning significant events in China’s modern history, such as the CPC-led Long March (1934-35) and the Korean War (1950-53), are awaiting producers and directors to explore.

For film director Cheuk Pak-tong, a professor emeritus of the School of Communication at Hong Kong Baptist University and founder of the university’s Academy of Film, the fact that one of the screenwriters of the film 1921 is a graduate of HKBU is a coincidence.

Cheuk suggested directors and screenwriters be more skilled in storytelling, especially stories with serious themes, if they want their works to be better accepted by global audiences.

Historical films are an important but relatively serious film category in the industry, but directors and screenwriters have a say in how they would narrate the stories, he said.

Cheuk also called for greater efforts to be made in film and drama promotion in order to reach out to bigger audiences and arouse their interest.

Chen Shuman contributed to this story.