Delta variant makes ground among unvaccinated in US 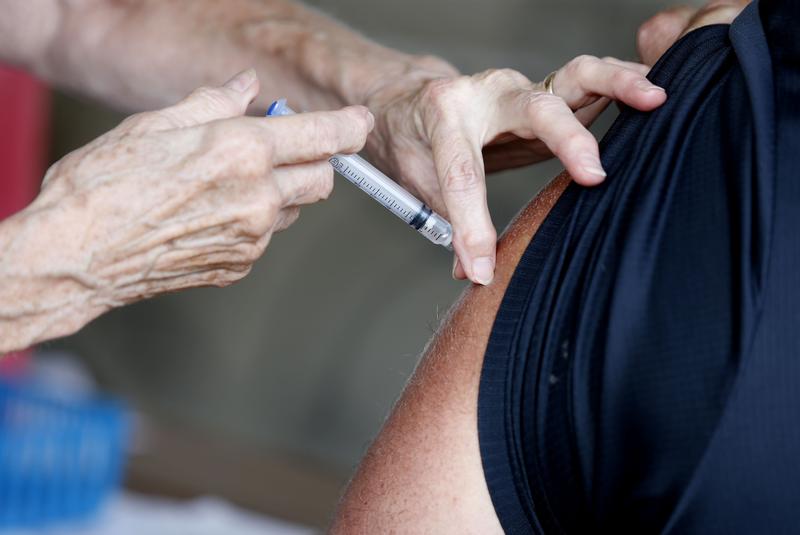 A man receives a COVID-19 vaccine at a clinic at Mother's Brewing Company in Springfield, Missouri, US on June 22, 2021. (NATHAN PAPES / THE SPRINGFIELD NEWS-LEADER VIA AP)

As the Delta variant spreads across the United States, coronavirus cases are spiking among unvaccinated people, accounting for about 52 percent of infections, according to health officials.

The surge of cases in the US and in many countries, much of which are attributed to the now dominant Delta variant and low vaccination rates, is alarming not just health officials, but also top US economic officials who said it could threaten the global economy.

"We are very concerned about the Delta variant and other variants that could emerge and threaten recovery," said Treasury Secretary Janet Yellen on Sunday at the conclusion of a meeting of finance ministers of the Group of 20 nations. "We are a connected global economy. What happens in any part of the world affects all other countries."

According to nationwide data from the Centers for Disease Control and Prevention, 48 percent of the US population is fully vaccinated, but about one-third of those aged 12 and older have not received the vaccine.

The US is averaging about 19,455 new cases over the last seven days, a 47 percent increase from the previous week, according to data from Johns Hopkins University, with 43 states seeing an increase in cases last week from the week before. One-third of those cases are in Florida, Louisiana, Arkansas, Missouri and Nevada.

Hospitalizations are rising again. Deaths also appear to start climbing. More than 99 percent of deaths are among people who have not been vaccinated, according to the CDC.

In Los Angeles County－the most populous in the US, coronavirus cases per 100,000 people jumped from 1.74 cases to 3.5 in one week, according to the county's public health department. Those who are not vaccinated represent 99.96 percent of all new infections. Sixty percent of those over the age of 16 have been fully vaccinated.

Anthony Fauci, director of the National Institute of Allergy and Infectious Diseases, told CNN that he thinks it is a good idea for mask mandates at the local level.

He added that he expects vaccine hesitancy to lift once vaccines are fully approved.

Another concern for many experts on the variants spread is whether the population will need vaccine boosters.

The FDA is planning to issue a warning that Johnson & Johnson's coronavirus vaccine can lead to an increased risk of a rare neurological condition known as Guillain-Barre syndrome, in which the immune system attacks the nerves.