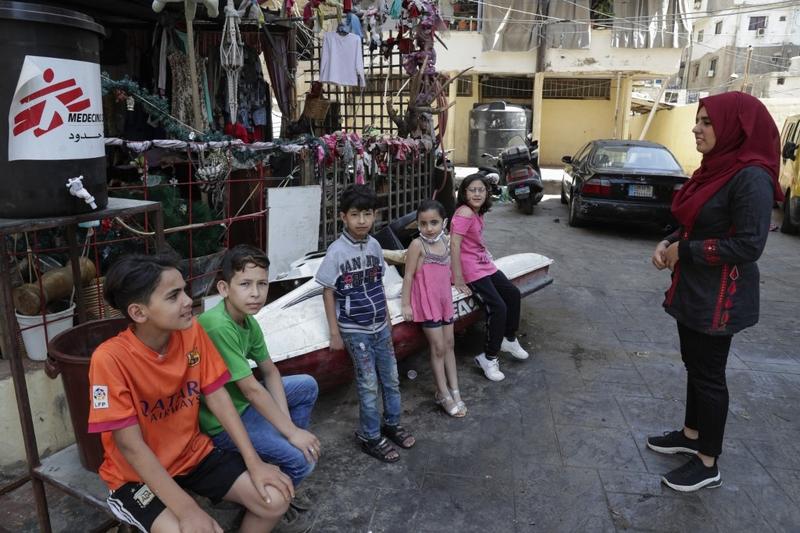 BEIRUT - Sorbonne-educated Chryssoula Fayad spent nearly two decades teaching history and geography at Lebanon's elite French schools, ultimately heading departments. Now she is a substitute teacher in Paris, part of an exodus from an education system on its knees.

Fayad left behind her home and life savings in August 2020, at 50 years old. Days earlier, the hospital where her husband worked and his clinic were damaged along with swathes of Beirut when chemicals exploded at the port - the final straw.

Corruption and political wrangling have cost the local currency more than 90 percent of its value in less than two years, propelling half the population into poverty and locking depositors like Fayad out of their bank accounts.

Despite her straitened circumstances, she has no regrets.

"I always say thank God that we had this chance to come here," she said. "Unfortunately I know I made the right decision when I see how things are in Lebanon now."

Private schools make up 70 percent of the educational sector, with upwards of 1,500 institutions. Rodolphe Abboud, head of the syndicate for private school teachers, said every school has lost between ten to 40 teachers so far, with some staying at home because they can no longer afford childcare

Lebanon's educational sector, prized throughout the Middle East as a regional leader, was once ranked tenth globally by the World Economic Forum's Global Competitiveness Report.

Now it is unclear how schools will manage when the new academic year starts in October.

"When the crisis erupted in 2019 it took the educational sector by surprise," Rene Karam, the head of the Association of Teachers of English (ATEL) in Lebanon, said.

At the start, some private schools laid off higher-paid teachers, around 30 percent of staff, to save money, but as time went on many others left of their own accord, with half of the 100 teachers in his association now in Iraq, Dubai and Oman.

Salaries starting at 1.5 million Lebanese pounds a month are now worth less than US$90 at the street rate in a country where they used to be US$1,000.

Private schools make up 70 percent of the educational sector, with upwards of 1,500 institutions. Rodolphe Abboud, head of the syndicate for private school teachers, said every school has lost between ten to 40 teachers so far, with some staying at home because they can no longer afford childcare.

"We are at the stage of just staying alive, the necessities," he said. "There is not one school now that is not advertising for jobs."

Children from several grades have already been put together for some subjects and daily power cuts and shortages of basic materials also make it difficult for schools to operate.

This week the education ministry cancelled final middle school examinations in response to pressure from parents and staff who had argued economic conditions made them impossible.

"The minister wanted to conduct exams but didn't he know that in Lebanon there is a shortage of paper and ink and teachers can't work for free and schools can't operate without fuel for electricity generators?" Karam said.

The education ministry said it had secured extra pay from donors for teachers supervising exams but most had pulled out.

"The majority of teachers gradually withdrew from supervision and this is what made it impossible to conduct the middle school exams," Hilda Khoury, a director at the ministry, said by email, adding that senior school exams would take place.

Father Boutros Azar, secretary general for Catholic Schools in the Middle East and North Africa, said parents at many of its 321 schools in Lebanon were struggling to pay annual fees that range from 3 million to 8 million pounds.

"But we have made a decision to continue and do whatever it takes to keep schools open," he said.

A government employee said no one had paid the fees for next year yet at the school attended by her two sons, aged 10 and seven. The school had demanded US$600 for each child in dollars in addition to 12 million Lebanese pounds.

"Where does anybody get fresh dollars to pay these days? We all get paid in local currency so how are we supposed to get this amount?," she said, declining to be named due to the sensitivity of her job.

Abboud, sitting in one of 130 schools that were damaged by the port blast, said some parents were voting with their feet, putting pressure on the small state sector, or moving abroad.

"We are seeing families going from private schools to public schools and others moving outside of Lebanon to Arab countries or Europe and the US and Canada and this creates a problem."

"There is a vast difference between now and two years ago," said 25-year old Joy Fares who has been teaching for five years. "Then I would say no I want to stay with my family ... but now, no, it makes sense to just go."