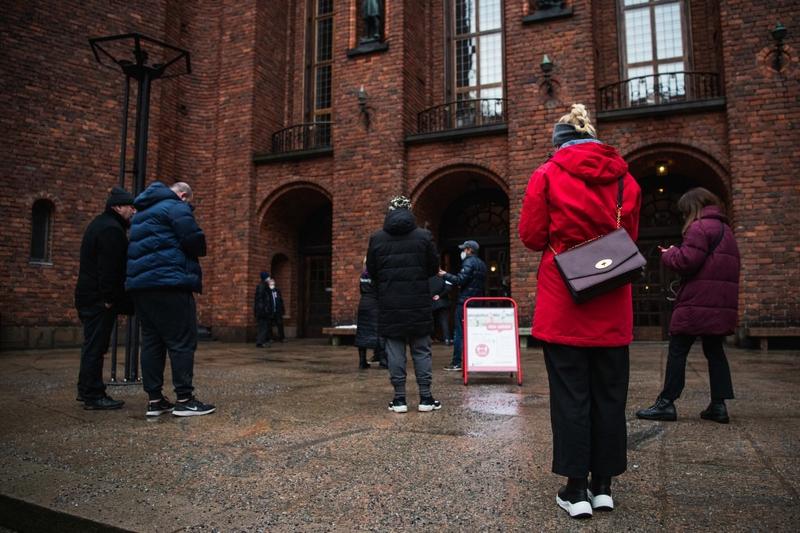 People wait for their turn to enter Stockholm's City Hall, known as venue for the Nobel Prize banquets and converted now into a COVID-19 vaccination center for a day on Feb 21, 2021 in the capital of Sweden, amid the COVID-19 pandemic. (JONATHAN NACKSTRAND / AFP)

Sweden has reached a turning point and it’s now entering a more stable phase, Tegnell told the newspaper. One of the remaining threats are pockets of people who remain unvaccinated, a problem best solved by local authorities rather than the central government, he said.

All citizens above the age of 18 will be allowed to get a COVID-19 vaccine shot on June 29-30 across all vaccination sites in Albania, Minister of Health and Social Protection Ogerta Manastirliu said Saturday.

The minister made the announcement of the open vaccination campaign from a vaccination site in the coastal city of Vlora, southern Albania.

"Based on a recommendation of the Public Health Institute experts, we have decided, as in many other countries, to launch a vaccination campaign for next Tuesday and Wednesday for all citizens above the age of 18," Manastirliu told local media.

Argentina has registered 18,555 new COVID-19 cases, bringing the total number of infections to 4,393,142, the Ministry of Health reported on Saturday.

Another 338 deaths were also reported, raising the national death toll to 92,317, the ministry said.

Brazil registered 1,593 more deaths from COVID-19 in the past 24 hours, bringing the national death toll to 512,735, the health ministry said Saturday.

The Ministry of Public Health reported that a record 11,100 Cubans have been hospitalized with the disease.

Denmark recorded its first case of the Delta plus variant, a mutation of the strain first discovered in India, the state agency dealing with infectious diseases said in a statement.

The variant was brought in by an infected passenger traveling from Portugal by plane. The passenger and the other people on board the plane are being tracked down and will have to go into isolation, the agency said.

The province of Pichincha led in new infections in the last day with 382, of which 331 were registered in the capital Quito, the epicenter of the pandemic in the South American country.

According to health authorities, public hospitals are facing a saturation in bed occupancy, mainly in intensive care units due to the sustained increase in the number of infections.

Ethiopia registered 112 new COVID-19 cases in the past 24 hours, taking the nationwide tally to 275,881 as of Saturday evening, the Ministry of Health said.

Meanwhile, seven new deaths and 288 more recoveries from the disease were reported, bringing the national death toll to 4,309 and the total recoveries to 258,491.

Germany will soon have so many doses of COVID-19 vaccine on hand that it will be able offer shots to passers-by in city centres or at places of worship as it seeks to vaccinate at least 80 percent of the population, health officials said on Saturday.

While demand is still outstripping supply in many doctors' practices, this will switch to a surplus in the next few weeks, Health Minister Jens Spahn said, adding the country needed to press on fast with vaccinations to prevent the Delta variant from taking hold.

The government will deliver 5 million doses to regional vaccination centres in the first week of July and drugmaker Moderna Inc will be able to deliver double the doses it had originally promised Germany, Spahn said in a televised discussion on the coronavirus.

That will mean the country will shift to campaigning more actively to encourage those who are hesitant to get a shot, offering vaccines to passers-by in city centres, or at churches and mosques.Germany imposed a 14-day quarantine on travelers returning from Portugal for failing to heed Chancellor Angela Merkel’s calls to crack down on the spread of the delta variant.

The measure, which will go into force Tuesday, comes after Merkel said Portugal’s decision not to tighten rules for British tourists undermined the continent’s defense against the variant spread. Unvaccinated U.K. travelers to Malta face a two-week isolation period

“What I regret is that we have still not been able to achieve uniform behavior among member states in terms of travel restrictions,” Merkel said at a press conference in Berlin on Wednesday. “We have a situation in Portugal which possibly could have been avoided.”

In a post on social media, Fearne said that 81 percent of the population has received at least one dose of a COVID-19 vaccine. The available jabs are two-dose Pfizer, AstraZeneca and Moderna vaccines, and the single-dose Johnson & Johnson variety. So far, a total of 646,651 vaccine doses have been administered.

According to data from the Ministry of Health, as of Thursday, a total of 303,939 people were fully vaccinated. Malta currently has 29 active COVID-19 cases.

Namibia, which currently has Africa’s most severe coronavirus infection rate, said it will from June 29 halt COVID-19 vaccinations except in cases where people need a second shot to complete an inoculation course. Supplies from COVAX, the vaccine-sharing initiative, have run out and there are delays to deliveries of vaccines the country has bought itself.

Namibia had an infection rate of 3,404 per million people in the seven days through June 24, according to data compiled by Bloomberg, putting it ahead of neighboring Botswana and South Africa.

Peru has registered the fourth case of the Delta variant of COVID-19, Health Minister Oscar Ugarte reported on Saturday.

After the detection of the fourth case, the Ministry of Health (Minsa) ordered the isolation and sampling of all the relatives of the infected patient.

The Minsa also imposed a strict epidemiological cordon to prevent the virus from spreading to other districts.

Poland started to ease restrictions on businesses further on Saturday amid dropping COVID-19 infection numbers across the country.

Starting Saturday, all public transport can run at full capacity, provided passengers wear face masks. Places of worship, cinemas and theaters are allowed to fill 75 percent of their normal capacity, up from 50 percent when they reopened on May 15. Hotels can now book up to 75 percent of their total rooms, not counting children under the age of 12.

The Polish government has also adopted the definition the European Union uses for people being fully vaccinated. A person is considered fully vaccinated 14 days after receiving their last dose, the government announced on its website.

While relaxing most restrictions, the Polish government on Thursday reintroduced a mandatory 10-day quarantine period for travelers coming from countries outside of the Schengen zone out of fear of the Delta variant of the coronavirus. The coronavirus mutation, which was first detected in India, is thought to be more contagious than the Alpha variant, which was first detected in Britain.

Reports over the week indicated that around 90 Polish residents have contracted the Delta variant so far.

In the past day de according to data from the government’s virus response center. In the past day, 599 people died of the disease, the first decline in deaths in six days. That brings the total death toll to 133,282.

About 2.5 million doses of the vaccine will be ready for use by the end of this month, Murashko said.

He said that the jab will be administered to those who have contracted COVID-19, as well as those who have received two doses of vaccines six months ago or more to boost their immunity.

Russian authorities are encouraging the public to get re-vaccinated to ward off the more dangerous Delta variant, which is spreading rapidly in the country.

ALSO READ: Study: Over 2m people in England may have had long virus

The Delta variant first detected in India was the major contributor to South Africa's third wave COVID-19 pandemic, a senior scientist said on Saturday at a press briefing.

Tulio de Oliveira, director of the KwaZulu-Natal Research Innovation and Sequencing Platform (KRISP), said the Delta variant appeared to be dominating the new infections recorded in the country.

"This is the variant that caused, initially, a massive epidemic in India and seems to increase very fast in frequency and dominating the infections in South Africa," he said. "In the more recent data that we did in the community transmission in KZN, it completely took over."

"We are in the third wave. We continue to see the numbers repeatedly rising and the number of these infections continue to rise and Gauteng continues to be the epicenter of these new infections," said Acting Health Minister Mmamoloko Kubayi at the press briefing.

British Health Secretary Matt Hancock on Saturday resigned after admitting that he broke COVID-19 social distancing guidelines during alleged affair with his aide, which reportedly caused an outrage in the country.

In his resignation letter to British Prime Minister Boris Johnson, Hancock said that "we owe it to people who have sacrificed so much in this pandemic to be honest when we have let them down as I have done by breaching the guidance."

"The last thing I would want is for my private life to distract attention from the single-minded focus that is leading us out of this crisis," he said in his resignation letter, which was published by Dowing Street.

Hancock has been under increasing pressure to quit after The Sun newspaper on Friday published pictures of him and his aide Gina Coladangelo kissing at the British Department of Health's London HQ reportedly during office hours in May.

Hancock's resignation came after embarrassing footage emerged of the health secretary in a clinch with his aide Coladangelo on May 6, when the public were still being advised not to hug people outside their household, the Guardian newspaper reported.

The UK added 18,270 cases, the most since early February, even though more than 80 percent of adults have had at least one vaccine dose. The spread of the delta variant is triggering the spike in infections, which have risen more than fivefold in June.

The vaccine campaign has helped limit the severity of the spread of the delta variant, with only about 1,500 people hospitalized. Another 23 deaths from COVID-19 were reported Saturday, compared with 18 on Friday.

The latest 7-day average number of administered vaccine doses per day decreased by 55.3 percent from the previous week, according to a weekly report of the US Centers for Disease Control and Prevention (CDC).

As of June 24, the 7-day average number of administered vaccine doses reported to the CDC per day was 0.37 million, according to the report released on Friday.

Zambia has finalized all administrative processes and requisite payment for shipment of China's Sinopharm vaccines to be part of the country's vaccination program, a government official said on Saturday.

Kennedy Malama, Permanent Secretary in the Ministry of Health in charge of Technical Services said 100,000 doses of Sinopharm vaccines were expected to arrive in the country in the next two weeks.

He said in a COVID-19 update that the government has also finalized the legal processes for the acquisition of the Johnson and Johnson vaccine and will now be making the requisite payments.

Zimbabwe on Saturday received a shipment of Sinopharm COVID-19 vaccine doses from China as the southern African country ramps up inoculations to battle the third wave of the coronavirus pandemic.

The country is also expecting to take another delivery of vaccine doses from the Chinese pharmaceutical company Sinovac next week.

The latest delivery of vaccines from China comes at a time when the country is registering a rebound in COVID-19 cases, prompting authorities to introduce new restrictive measures to curtail the spread of the virus.

According to the health ministry's daily update, the country on Friday recorded 911 new positive cases, the highest daily number since February.