Adaptive reuse of Hong Kong’s heritage architecture is gaining momentum in a city where tradition and renewal go hand in hand. Rebecca Lo looks at three structures getting gussied up for new lives. 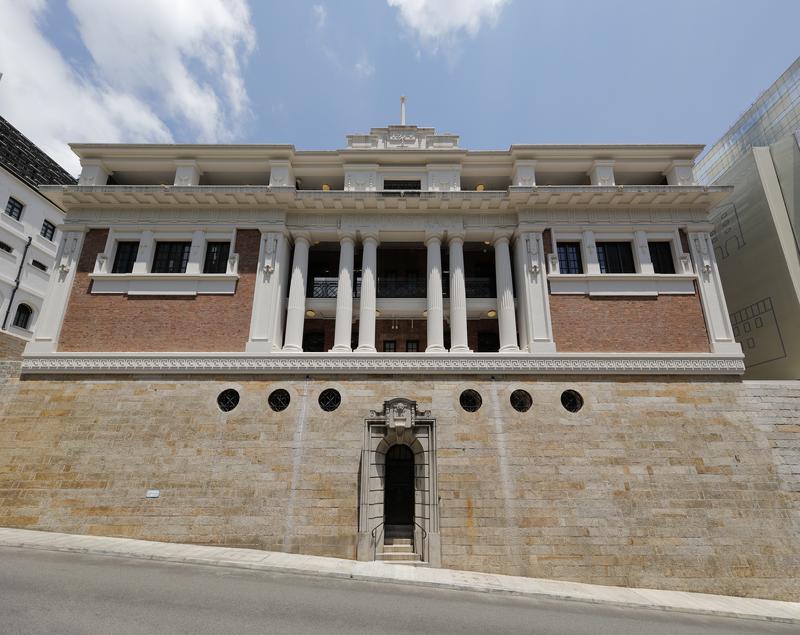 In the years following its return to the motherland, Hong Kong has struggled with an identity crisis. One of the ways of arriving at a better understanding of the city is by re-examining its architectural past, and the last few years have seen noteworthy efforts in that direction. After decades of reaching skyward with increasingly taller structures, the city is taking stock of its architectural inventory. By highlighting the physical remnants of what made a building special as they revitalize storied buildings, architects are helping future generations get an idea of where they come from.

Like their counterparts in Europe, Asian wet markets are much more than a retail space. Often they grow into hubs where people linger, to socialize and gossip. Central Market, to be reopened in phases starting in 2021, is a structure intrinsically linked to Hong Kong’s past. The Grade 3 historic building that now serves as a pedestrian walkway between Queen’s Road Central and Des Voeux Road dates back to 1939 — itself the fourth iteration of a public market first established in 1842.

“Central Market was a very modern market for its time,” said Tony Lam, senior director with AGC Design and heritage consultant for Central Market’s renovation by the Urban Renewal Authority. “Its architecture is not entirely Bauhaus — rather, it is streamline moderne. Its horizontality was expressed through continuous windows, its main feature. The building’s column and beam structure free up the facade for window bands. As a result, ventilation and natural lighting were maximized.” 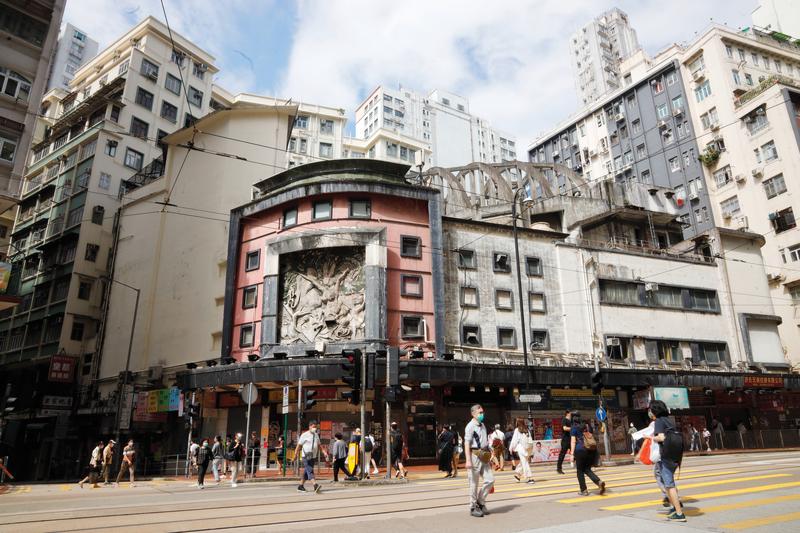 State Theatre in North Point is being developed as a cultural destination by New World Development and will reopen in its revitalized form in 2026. (EDMOND TANG / CHINA DAILY)

Due to its prime location in the heart of Central, the adaptive reuse of Central Market has involved a decades-long process to ensure due diligence. Following a two-year-long public engagement exercise, a plan was adopted to make the structure more open and publicly accessible while enhancing its most significant architectural features — the atrium, grand staircases, and the horizontality of the structure’s facade.

The market will offer 1,000 square meters of open public spaces in the atrium and Queen’s Road entry plaza — intended for recreation, leisure activities, exhibitions and other public events. Rather than being used as wet-market booths, the renovated market stalls will be leased to retail and food-and-beverage vendors with cultural intents. In February, Chinachem Group’s Noble Vantage was awarded the contract to operate Central Market.

One of the biggest challenges with any revitalization project is to bring a grand dame up to date for contemporary usage, including all the rules and regulations applicable today. “These requirements are difficult for smaller buildings,” Lam acknowledged. “Fire rating, additional staircases — these public safety and health regulations should be balanced with the building’s architectural merits. The government’s guidelines may end up altering the structure’s original design.” 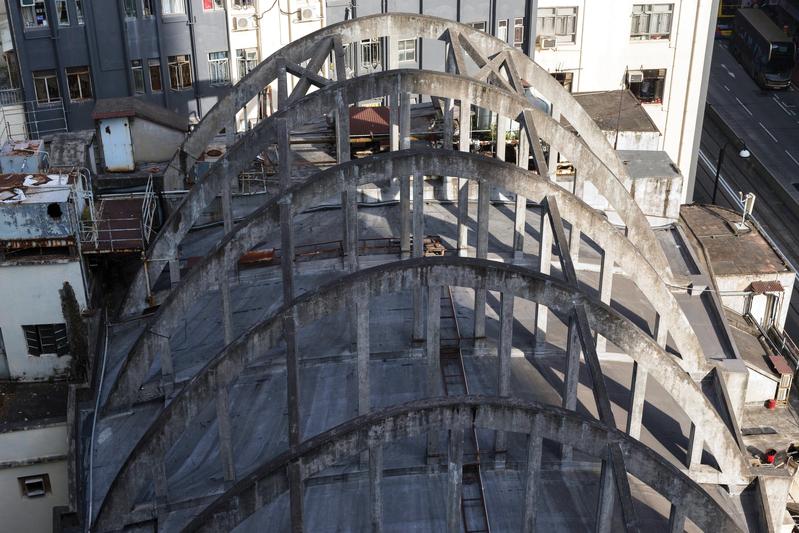 The most distinctive feature of State Theatre, which opened in 1952, is its parabolic exoskeleton roof truss with vertical hangars. (ROY LIU / CHINA DAILY)

Syed Asim Hussain understands the constraints of adapting heritage structures to modern usage all too well. Co-founder of Black Sheep Restaurants with Christopher Mark, Hussain is in the middle of developing five restaurant and bar outlets for Tai Kwun’s Central Magistracy. The first of the three phases of development the brand is involved in is slated to be unveiled in the summer of 2022 and will consist of a restaurant and a bar, both designed by Joyce Wang.

“It is challenging,” Hussain said. “We gave more than 100 slide presentations and hosted lots of discussions with the Jockey Club and Tai Kwun teams. It was a very rigorous process. We had to hire heritage consultants Purcell. We are not allowed to hammer a nail into any walls. Everything had to go through the Antiquities and Monuments Office.” 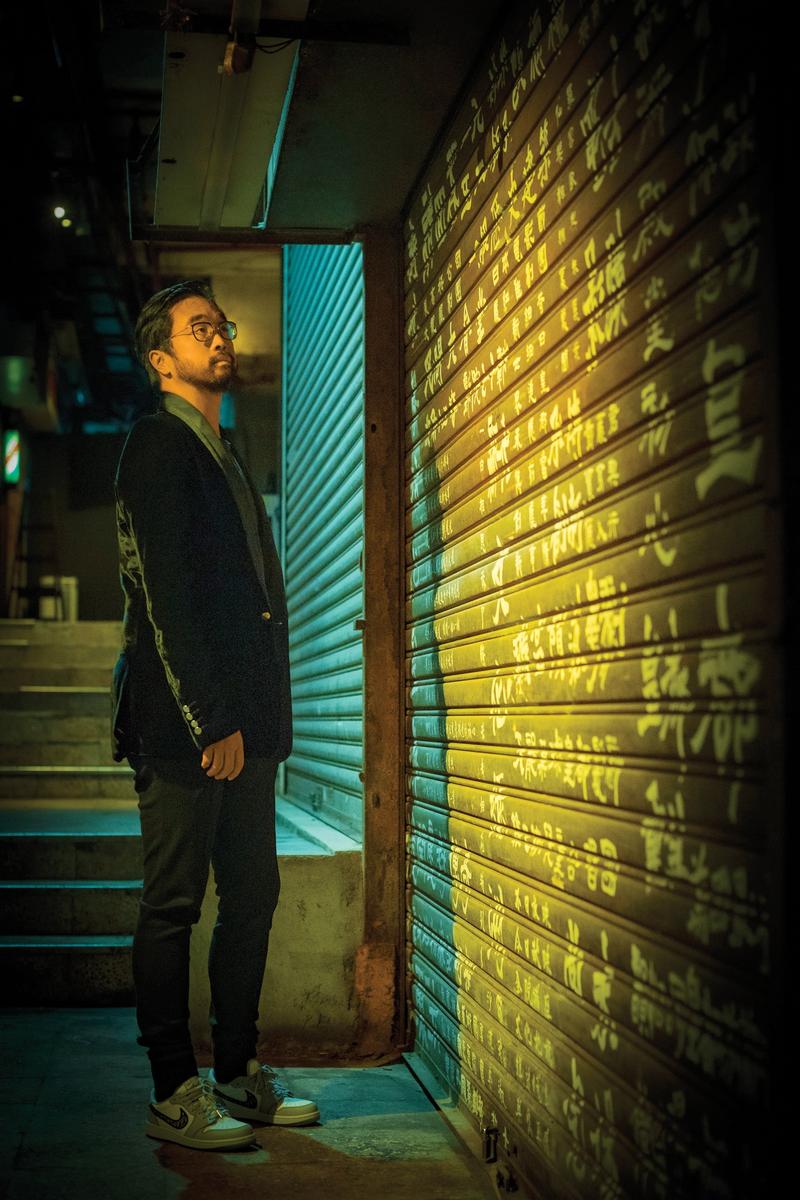 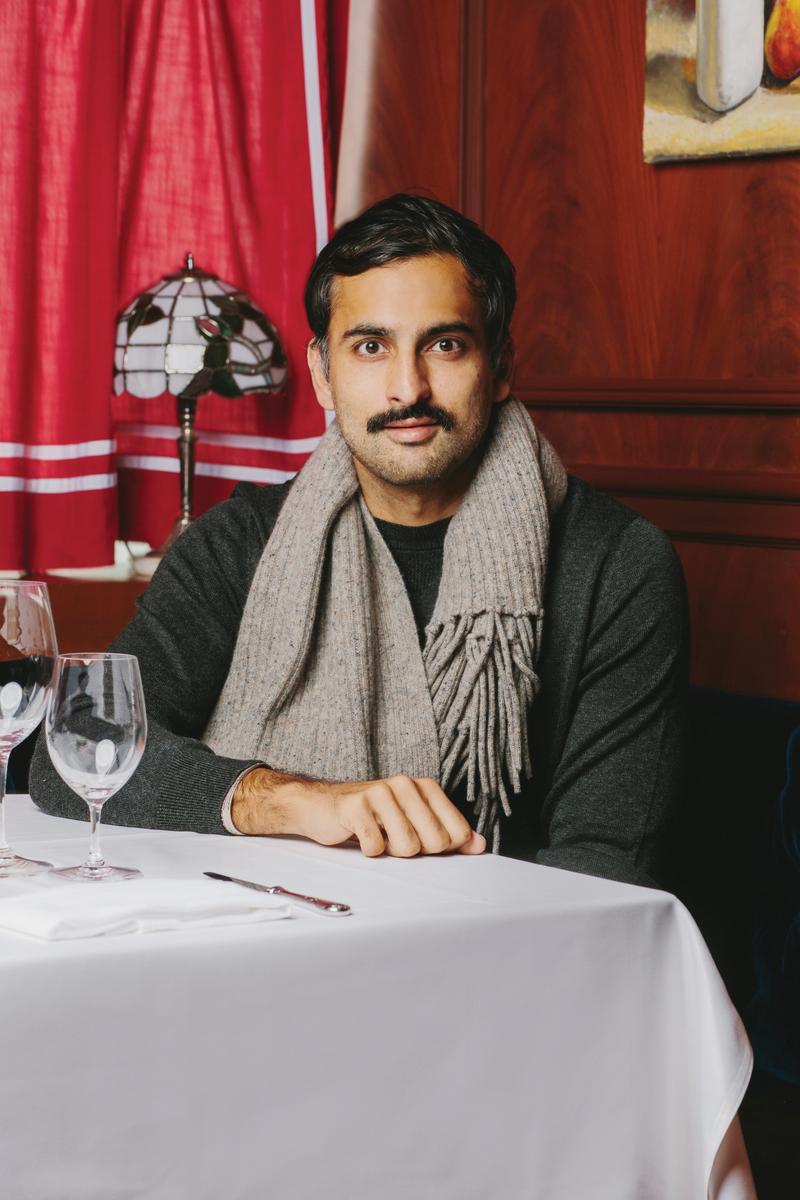 Syed Asim Hussain, co-founder of Black Sheep Restaurants, says adapting Central Magistracy into a dining destination was challenging, as “we are not allowed to hammer nails into any walls”.  (PHOTO PROVIDED TO CHINA DAILY)

The Central Magistracy was first opened in 1914 on the grounds of another building that dates back to 1847, and is an elegant Greek revival red brick structure facing Arbuthnot Road. Situated in the eastern boundary of the Tai Kwun art and culture complex, the building was previously used for pop-up events such as storytelling spaces. Given the growing popularity of Tai Kwun as a dining destination since the complex opened in 2018, F&B was determined to be the best way forward to activate the historic spaces.

“In a city obsessed with newness, we are privileged to be given the keys to a monument,” Hussain said. “We want to honor the history and heritage of Central Magistracy. We are feeling the pressure!”

In keeping with the building’s origins, the outlets will together invoke the feel of a 1950s private social club for the legal fraternity. There will be 500 seats in total, with al fresco dining spaces, private dining rooms and wine cellars.

Hussain believes restaurants evoke emotional responses. He is excited by the notion of transporting guests back in time through the Central Magistracy. “I am happy that adaptive reuse of heritage buildings is coming to the forefront,” he said. “We lose the heart of a city if we are constantly tearing down and rebuilding. The Tai Kwun team is very passionate and committed to conservation — they are not real estate people.” 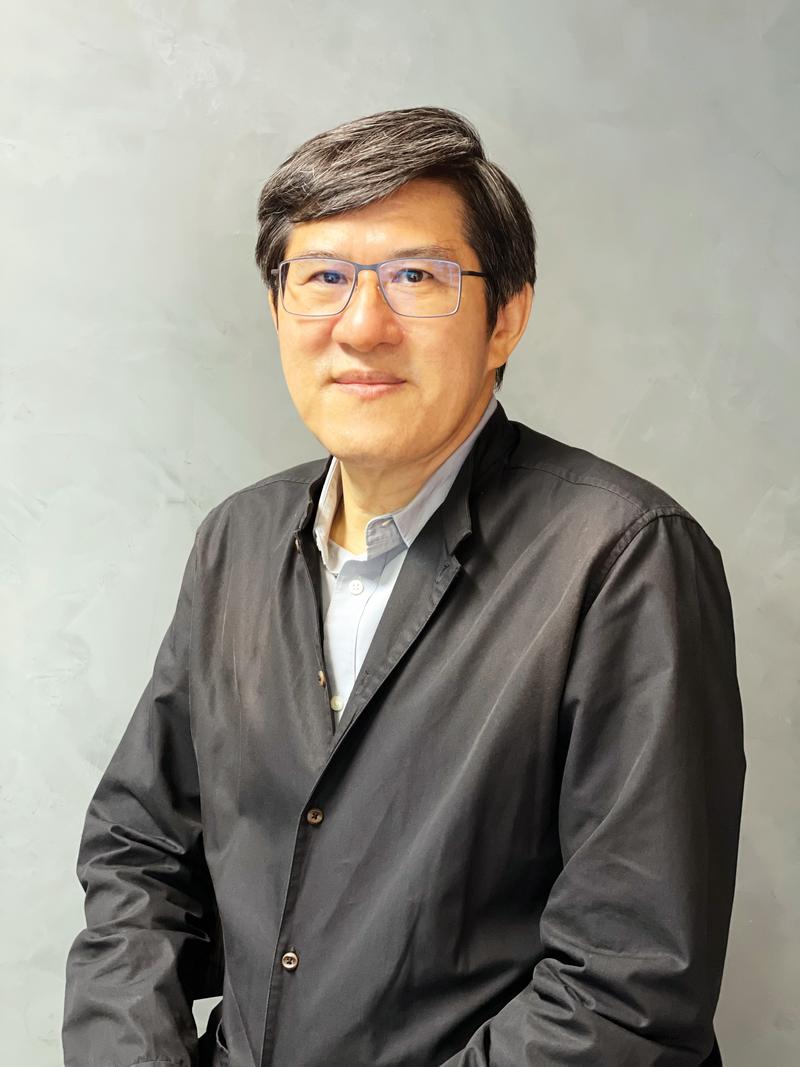 Tony Lam, heritage consultant for Central Market’s renovation, says the architecture of the 1939 building was “modern for its time”. (PHOTO PROVIDED TO CHINA DAILY)

The stage is set

Although it will not reopen until 2026 at the earliest, State Theatre in North Point is getting a lot of buzz lately from activation events and tours of the historic property. New World Development began purchasing shops that constitute the 1952 structure since 2015 and is in the early stages of revitalizing it into an art and culture destination.

Originally called Empire Theatre, State Theatre has a history that coincides with that of the Hong Kong film industry. Around 50 years ago, Hong Kong was considered Asia’s filmmaking capital and North Point was known as Little Shanghai. Founder and businessman Harry Oscar Odell was responsible for giving the theater its veneer of glamour, working hard to secure acts that had international celebrities and household names. During its heyday, the 1,300-seat theater hosted live performances by the likes of violinist Isaac Stern, and screenings of Hollywood hits such as The Sound of Music. 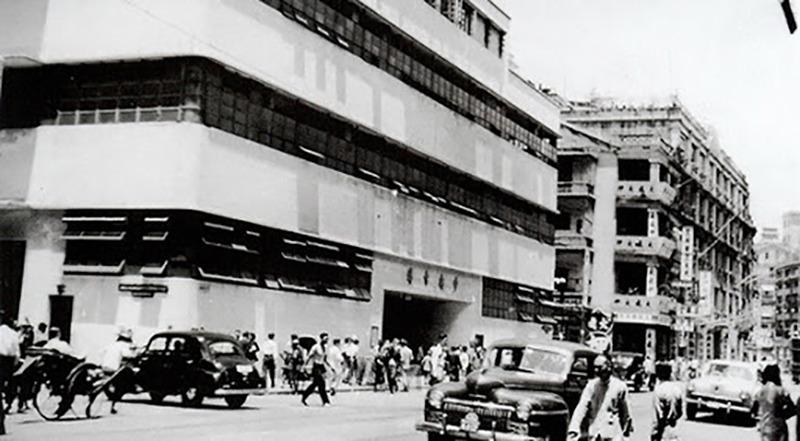 Tony Lam, heritage consultant for Central Market’s renovation, says the architecture of the 1939 building was “modern for its time”. (PHOTO PROVIDED TO CHINA DAILY)

A standout architectural feature of State Theatre is its parabolic exoskeleton roof truss with vertical hangars that allows for an expansive auditorium space, while also acting as a natural amplifier and sound isolator. Along with a shopping arcade on the lowest level, State Theatre was a complex that included residences.

“State Theatre is one of the last standing cultural icons of Hong Kong,” said Adrian Cheng, CEO of New World Development. “We will do our best to conserve and restore this iconic building to its original glamour and build a cultural oasis that serves the community. We do not just want to preserve its essence — we will revive it and make it a destination for millennials and many more generations to come.” 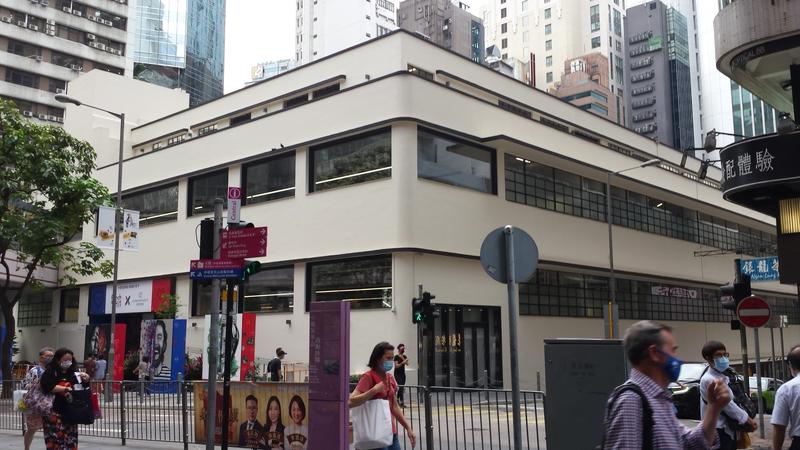 When the renovated Central Market opens to the public, the stands earlier used for selling fresh produce will be leased to retail and food-and-beverage vendors with cultural intents. (PHOTO PROVIDED TO CHINA DAILY)

A pop-up event, Discover the State Theatre in All of Us, was hosted by Cheng’s Culture for Tomorrow initiative in April. The shopping arcade on the lower floor of State Theatre was transformed into a series of 1950s vignettes. Visitors were offered a glimpse into a barber shop from a bygone era and a mock-up of Odell’s office.

“Through this event, we hope to provide a platform for young artists in Hong Kong to connect with the community while offering Hong Kong people an innovative way to discover the stories behind the theater,” Cheng said. “Calligrapher Sam Chan created an impromptu artwork on the iron gate, referencing movie designs of the 1950s and ’60s. Film-poster painter Lam Ka-hang created a series of movie posters manifesting the charm of classic movie characters in a nostalgic way.”

Cheng said the pilot event in April will be followed up with many more cultural activities presented at State Theatre “before it returns fully restored in 2026”.