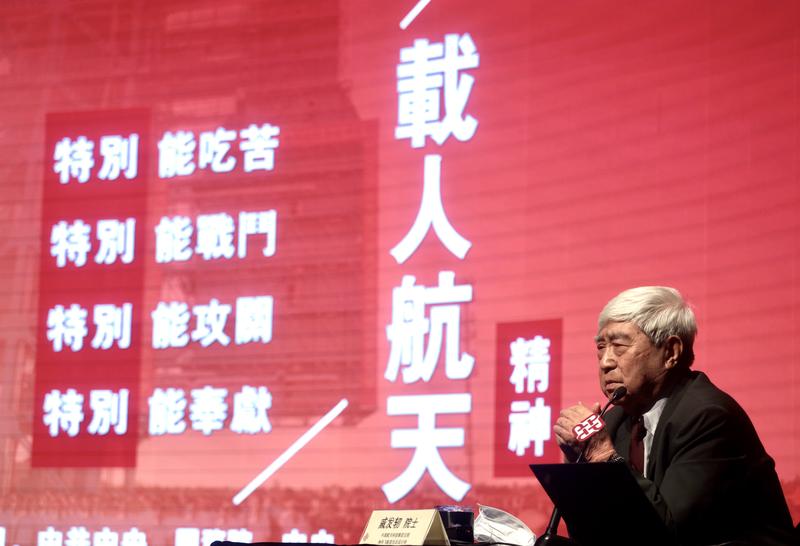 For Hong Kong’s students and young researchers, it was a day unlike any other as they listened, mesmerized, to first chief designer of China’s Shenzhou spacecraft on Wednesday at the Hong Kong Polytechnic University.

They said they felt motivated and encouraged by Qi Faren’s lecture, which was the first face-to-face talk given by the country’s top aerospace scientists and engineers in the city.

The opportunity to attend the lecture by Qi Faren, first chief designer of China's Shenzhou spacecraft, was “a rare opportunity and experience” for a researcher, said Morgan Liu Wai-chung, who was part of a 20-member team that assisted the nation in its latest space exploration mission

For postdoctoral student Morgan Liu Wai-chung, the opportunity to attend the lecture was “a rare opportunity and experience” for a researcher.

Qi’s sharing shed some light on the difficulties and perseverance that scientists encounter during their experiments, Liu said, adding that he is looking forward to more such sharing.

Liu was part of a 20-member team led by Wu Bo, professor at Department of Land Surveying and Geo-Informatics of the PolyU, to assist the nation in its latest space exploration mission. They helped handpick a landing site on the Mars for the Tianwen-1 mission.

Another member of Wu’s team, Brandon Chen Long, said it is inspiring to learn from the top experts. “I hope I can make contribution using my research ability in the construction of the (Guangdong-Hong Kong-Macao) Greater Bay Area as well as the nation’s future development,” he said.

Li Zhaojin, 24, who is also on Wu’s team, said he felt honored to be able to listen to the insights of one of the best brains in the aerospace sector.

Coming to Hong Kong to give the talk at the PolyU is a recognition of the school’s efforts and the team’s work, she said.

Li felt Qi’s words have renewed her passion and drive to pursue the path of research. “As a researcher, it is not an easy path. But I felt honored and satisfied to contribute what I have learned to develop the country.”