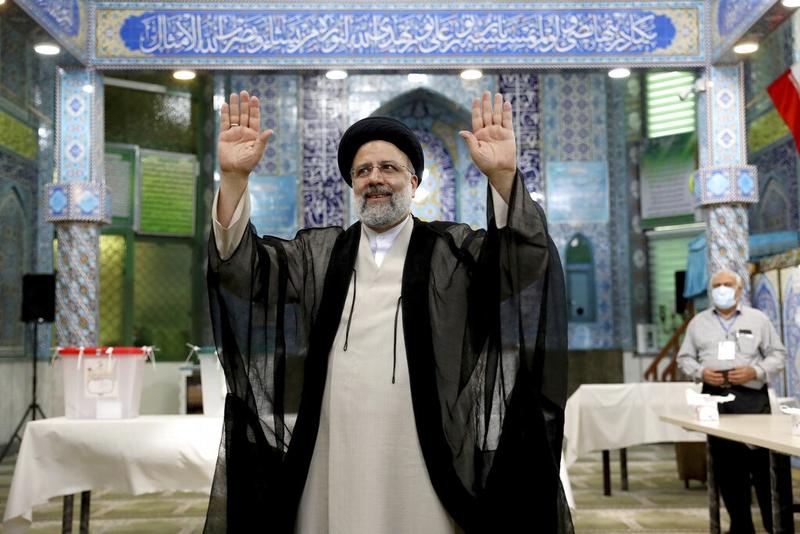 Ebrahim Raisi, a candidate in Iran's presidential election, waves to the media after casting his vote at a polling station in Tehran, Iran, June 18, 2021. (EBRAHIM NOROOZI/AP)

Raisi, 60, secured 17.8 million votes and the only moderate candidate in the race, Abdolnaser Hemmati, came third with 2.4 million ballots, Jamal Orf, head of Iran’s presidential election headquarters said in a statement on state TV, adding that 90 percent of ballots have been counted so far.

Figures given by Orf indicate that turnout was 48 percent, the lowest in a presidential vote in the history of the Islamic Republic, with Raisi securing 62 percent of ballots cast.

"I hope your administration, under the leadership of Supreme Leader Ayatollah Ali Khamenei, will make the Islamic Republic proud, improve livelihood and ensure the nation's well-being and welfare," media quoted former central bank chief Abdolnasser Hemmati as saying in a letter.

Ebrahim Raisi is a harsh critic of the West and the standard bearer of Iran’s security hawks. He was appointed by Khamenei to the high-profile job of judiciary chief in 2019

In a televised speech, outgoing President Hassan Rouhani congratulated "the people's elected (president)", without naming him.

"Because it has not been officially announced yet, I will delay the official congratulations. But it is clear who received the votes," Rouhani said.

Raisi is a harsh critic of the West and the standard bearer of Iran’s security hawks. He was appointed by Khamenei to the high-profile job of judiciary chief in 2019.

Hoping to boost their legitimacy, the country's clerical rulers had urged people to turn out and vote on Friday, but dissidents inside and abroad said popular anger over economic hardship and curbs on freedoms kept many Iranians at home.

Another deterrent for many pro-reform voters was a lack of choice, after a hardline election body barred heavyweight moderate and conservative candidates from standing.