India 'to hold off vaccine exports until domestic demands met'

Employees monitor the production of line for vials of Covishield, the local name for the COVID-19 vaccine developed by AstraZeneca Plc. and the University of Oxford, at the Serum Institute of India Ltd. Hadaspar plant in Pune, Maharashtra, India, on Jan 22, 2021. (PHOTO / BLOOMBERG)

There is no exact time frame on a lifting of restrictions on vaccine exports, AP reported, citing an interview with Vinod K. Paul. While a resumption is still “on the radar,” another factor that India will consider before doing so is when vaccine stockpiles are visible, he said.

India reported on Saturday 60,753 new COVID-19 cases and 1,647 deaths over the past 24 hours, according to a government statement.

There are currently 760,019 active cases, down 38,637. According to the health ministry, the country's active caseload at present is the lowest in 74 days.

Turkey has sharply accelerated COVID-19 vaccinations this week, delivering more than 1 million a day since Monday, raising hopes of a strong economic performance in the second half of the year.

The vaccination program has been constrained since its launch in January by sporadic vaccine procurement, but fresh supplies arrived this month. On Friday inoculations passed the 40 million mark and 40 percent of adults had had at least one dose, according to a Reuters tally.

Since Monday more than 6 million had been vaccinated, health ministry data showed, 5 million of them receiving a first dose.

The order will be in effect starting Saturday as the township has recently seen a rise in COVID-19 test positivity rate.

According to the ministry's release on Friday, Myanmar reported 301 new COVID-19 infections and one more death in the past 24 hours.

In total, the country has reported 147,069 confirmed cases with 3,251 deaths, according to the release.

A total of 133,452 recovered patients have been discharged from hospitals so far. 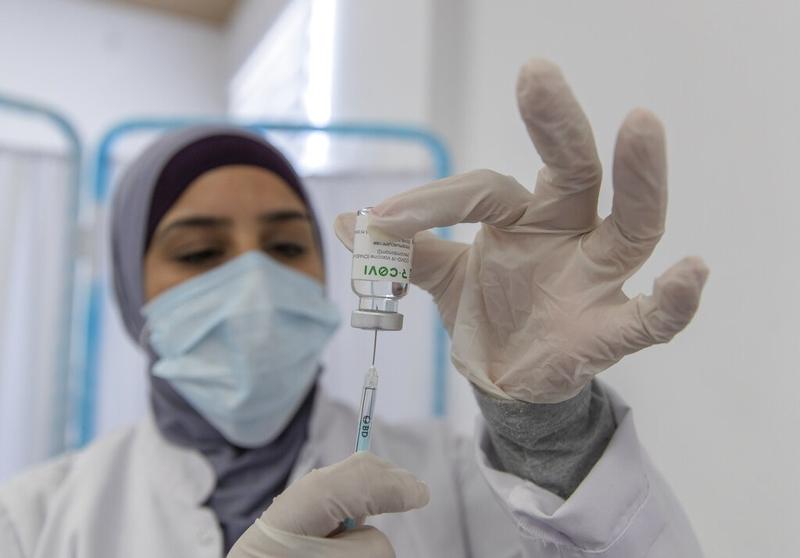 A healthcare worker prepares a dose of the Oxford-AstraZeneca COVID-19 vaccine during a vaccination campaign in the West Bank city of Ramallah on June 6, 2021. (NASSER NASSER / AP)

The Palestinian Authority (PA) canceled a deal on Friday to receive soon-to-expire COVID-19 vaccines from Israel after an initial Israeli shipment showed an expiration date sooner than had been agreed, the PA health minister said.

Israel and the PA announced a vaccine swap deal earlier on Friday that would have seen Israel send up to 1.4 million Pfizer-BioNTech doses to the PA, in exchange for receiving a reciprocal number of doses from the PA later this year.

The doses were due to "expire soon", Israeli Prime Minister Naftali Bennett's office said in a statement announcing the deal. The PA said they had been "approved in order to speed up the vaccination process" in the occupied West Bank and Gaza.

"They told us the expiration date was in July or August, which would allow lots of time for use," PA Health Minister Mai Alkaila told reporters later on Friday.

"But (the expiration) turned out to be in June. That's not enough time to use them, so we rejected them," she said.

The PA canceled the deal over the date issue, a PA spokesman said, and sent the initial shipment of around 90,000 doses back to Israel.

Australia could open its international borders to foreign students before other visitors as a trial for travel bubbles the country is attempting to establish, the Australian newspaper reported, citing an interview with the Prime Minister Scott Morrison.

Morrison told the newspaper the government was considering conducting early trials of a new recognition system for vaccinated arrivals on foreign students and has held initial talks with Singaporean Prime Minister Lee Hsien Loong on building a border clearance system that is compatible.

“Doing it (with) students would be a good first run-around to prove up the system,” he said. Other trials could be set up with regions including Singapore, Japan, and South Korea, the newspaper reported.

However, Morrison reiterated that his government was in no rush to reopen the country's borders.

The point of transmission of the new infections hasn't been determined, but authorities believed they are linked to the first case of the Sydney cluster of the highly-infectious Delta variant, which now stands at six cases.

The state of Victoria, which battled a small outbreak of the Delta variant earlier this month, recorded one new locally acquired case.

Nationwide, Australia has reported over 30,300 cases and 910 deaths.

Mongolia registered 14 more COVID-19 deaths over the past 24 hours, the highest daily number of fatalities, bringing the death toll to 439, the health ministry said Saturday.

So far, 1,903,859 Mongolians have received their first dose of a vaccine, and 1,684,287 people have been fully vaccinated, according to the ministry.

Cambodia reported 20 deaths from COVID-19 on Saturday, a record for a single day, as the country detected its first Delta variant cases and authorities urged people to be vigilant.

The Southeast Asian nation has recorded one of the world's smallest COVID-19 caseloads, but the outbreak that was first detected in late February has caused infections to climb to 42,052 cases with 414 deaths.

"Please continue to be vigilant by practicing hygiene, social distancing and not leaving your homes unnecessarily. Our country and the world continue to be plagued by the Covid 19 pandemic," Cambodia's Communicable Disease Control Department said in a statement posted on Facebook on Saturday.

The Ministry of Health also reported seven cases of the Delta variant of the coronavirus among travelers by land from neighboring Thailand.

A plane carrying a new batch of Sinovac COVID-19 vaccines arrived in Phnom Penh, capital of Cambodia, on Saturday, giving another boost to the kingdom's inoculation drive.

According to Or Vandine, the ministry's secretary of state and spokeswoman, 5.92 million vaccine doses have been administered in the kingdom, with 2.66 million people having completed the two-dose inoculation.

South Korea reported 482 more cases of COVID-19 as of midnight Friday compared to 24 hours ago, raising the total number of infections to 150,720.

One more death was confirmed, lifting the death toll to 1,997.

The Philippines' Department of Health (DOH) reported on Saturday 6,959 new COVID-19 infections, bringing the total number of confirmed cases in the Southeast Asian country to 1,353,220.

Health workers and law-enforcement personnel were among the first to receive their first dose of the vaccine on Saturday, private broadcaster ATN News reported.

China's Sinopharm vaccine has been pre-ordered by more than 17,000 organizations for their employees in Thailand, the Chulabhorn Royal Academy (CRA) said on Saturday.

The CRA said 17,070 organizations and companies nationwide have registered to obtain the Sinopharm shot to inoculate more than 4.87 million employees.