Skyline is seen over the Victoria Harbour in Hong Kong, China on May 26, 2021. (PAUL YEUNG / BLOOMBERG)

The world’s most expensive property market is unstoppable.

Despite a struggling economy, demand for homes in Hong Kong -- ranging from luxury mansions to shoebox apartments -- remains unquenched.

In a few hours, buyers snapped up 45 new apartments worth a total of HK$248 million (US$32 million) in Henderson Land Development Co’s The Upper South project on a recent Sunday. New World Development Co’s The Pavilia Farm III was so popular that 88 buyers had to vie for one apartment -- making it the most in-demand project since 1997.

Property prices in the city are hovering near an all-time high set in mid-2019. Secondary market transactions in the 10 biggest housing estates are set to surpass HK$20 billion for the first half of 2021, the highest in 23 years, according to Centaline Property Agency Ltd.

Hong Kong isn’t alone in a real estate frenzy that’s been fueled by rock-bottom interest rates to prop up economies worldwide during the pandemic. But its resilience has come against the odds after the anti-government protests in 2019. 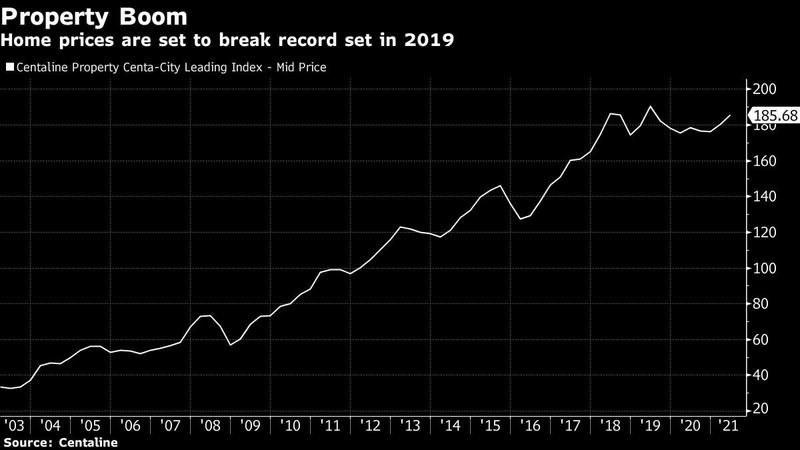 Hong Kong’s home price inflation is moderate compared with places like New Zealand and Canada, ranking 46th last quarter in an index compiled by Knight Frank. In the US, where bidding wars are now common in suburbs, prices surged the most on record in the three months.

Hong Kong’s average property value was a world-beating US$1.25 million as of June 2020, according to CBRE Group Inc.

The city’s low housing stock can be traced back to the Asian financial crisis in 1997, when the government froze land supply to support the property market.

The number of private units that can be produced from available land plots also plunged from a peak of 25,500 three years ago to 13,020 this year, according to think tank Our Hong Kong Foundation.

Mainland buyers are helping to boost demand for homes. They accounted for 11.2 percent of purchases by value in the first four months, up from 10.5 percent in the same period last year, according to Midland Realty.

That all adds up to one thing: more rising prices. Cushman & Wakefield expects home values will climb 5 percent to a record in the second half.