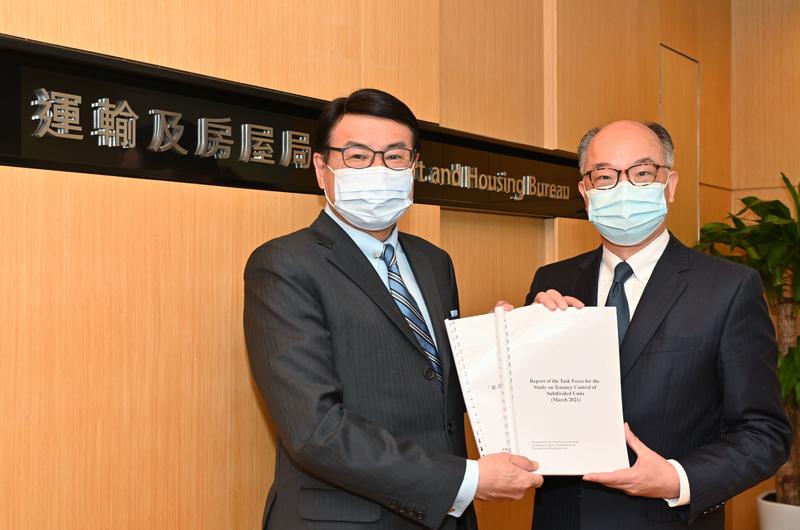 HONG KONG – A government task force recommended on Wednesday the introduction of standard contracts and a cap on rent increases for subdivided flats to better protect these low-income tenants in Hong Kong.

Outlining a newly completed report at a press conference, William Leung Wing-cheung, chairman of the Task Force for the Study on Tenancy Control of Subdivided Units, said it proposed to formulate a "standard tenancy agreement" with mandatory terms.

The task force recommended that the term of a regulated tenancy should be fixed for two years and the rent cannot be increased during the tenancy period.

The tenant will have the option to renew the tenancy once, thus enjoying four years of security of tenure, it proposed.

On tenancy renewal, the rate of rent increase should not be more than the percentage change of the private domestic rental index of the Rating and Valuation Department in the relevant period. The hike should be capped at 15 percent if the index goes above that mark.

Under the proposal, the tenant could terminate the tenancy agreement after 12 months into the tenancy by giving one month's notice to the landlord.

William Leung, chairman of the Task Force for the Study on Tenancy Control of Subdivided Units, said the proposal balanced the interests of the tenants and landlords

The tenant should not be liable to make payment to the landlord other than the rent, deposit and utility charges. As a deterrent, a landlord may commit an offense and be subject to penalties for doing so.

The task force also recommended that the government should mandate the signing of a written tenancy agreement at the outset.

Leung said the proposal balanced the interests of the tenants and landlords.

“Regarding the cap on the rate of rent increase on tenancy renewal, I must reiterate that 15 percent is not the increased rate of rent we proposed. We are proposing that the market follow the residential rental index provided by the Rating and Valuation Department.

“If the private housing market is talking about a rent increase of 40 percent, and yet we only allow the landlords to increase rent by 2 percent, then that is not fair. And that scenario is going to invite challenges.”

Secretary for Transport and Housing Frank Chan Fan thanked the task force for conducting a comprehensive and in-depth study on the issue and for advancing the submission of the report to the government by three months in view of the public's concerns.

The government said it would carefully consider the recommendations put forward by the task force and introduce the relevant bill into the Legislative Council as soon as possible within the current legislative session.