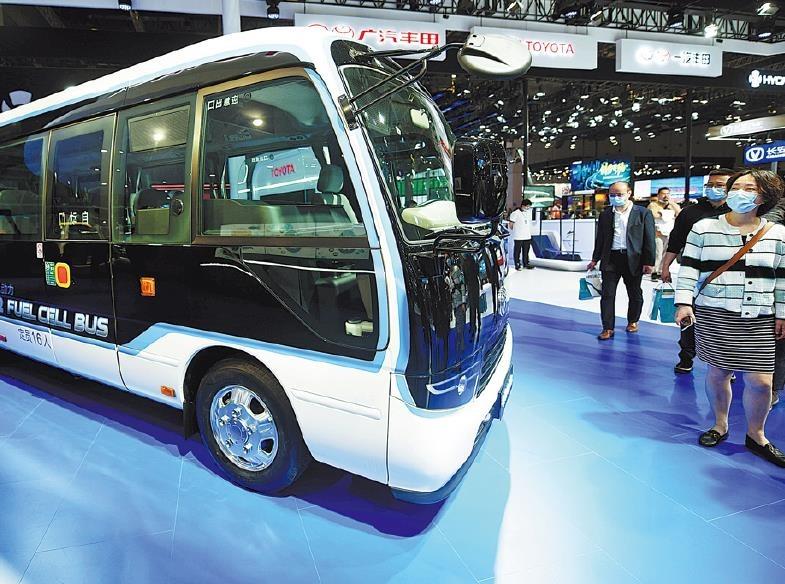 In this undated photo, visitors check out a hydrogen fuel cell bus at the 2021 Shanghai auto show, held from April 19-28. (LONG WEI / FOR CHINA DAILY)

As China aims to achieve carbon neutrality by 2060, more opportunities will emerge in the hydrogen fuel-cell vehicle sector, experts said.

"Industry players should seize opportunities offered by the nation's commitment to achieving carbon neutrality. They should consistently enhance the performance and technology of core components and parts, key materials and fuel cell systems, and lower system costs," said Zhang Jinhua, executive vice-president and secretary-general of the China Society of Automotive Engineers, during the sixth International Hydrogen Fuel Cell Vehicle Congress in Shanghai.

The China Society of Automotive Engineers projected there will be about 1 million fuel cell vehicles in operation across China by 2035, along with some 5,000 hydrogen filling stations

In its report on energy saving and new energy vehicles, the China Society of Automotive Engineers projected there will be about 1 million fuel cell vehicles in operation across China by 2035, along with some 5,000 hydrogen filling stations.

To achieve this goal, the development and enhancement of key technologies including fuel cell materials, engine systems and hydrogen filling stations will be vital, said experts during the three-day event that closes on Thursday.

"There has been a global consensus to realize decarbonization. Currently, major nations are resolute in developing cleaner hydrogen-based energy worldwide with respective strategies and road maps," said Yu Zhuoping, professor of the School of Automotive Studies of Tongji University.

Although a relative latecomer in hydrogen power, China is rapidly narrowing its gap with global peers, and it has even gained an advantage in industrial supply chain layout.

The drive to go green and achieve carbon neutrality along with the upcoming Beijing Winter Games in 2022 are prompting development of hydrogen fuels and FCVs across China.

"As you look to 2030, we expect to see about 5 million fuel cell vehicles globally on the road, with a heavy emphasis on fuel cell buses and commercial trucks, and China will play a significant role in that adoption," said Randy MacEwen, president and CEO of Ballard Power Systems.

MacEwen said fuel cells have the strongest value proposition in medium and heavy-duty motive markets, like buses, trucks, trains and boats. This is because the value proposition is strongest for heavy vehicles with long range requirements and fast refueling needs. These are the markets, and batteries struggle to have capable solutions.

Under the agreement, Sinyuan becomes the exclusive graphite materials supplier for Ballard's bipolar plates, and the two parties will work together to promote the popularity and application of fuel cells.

"Being an important material supplier and partner of Ballard Power Systems shows the appreciation for Sinyuan's graphite bipolar plate material quality. And Sinyuan will lower production costs for fuel cells from upstream segments of the supply chain to promote clean energy popularization in China," said Yuan Yilin, president of Sinyuan.

READ MORE: Carmakers step on the gas with research into fuel cell vehicles

The hydrogen fuel cell industry is taking shape in China, with more than 2 billion yuan (US$312.4 million) invested in research and development so far. Currently, there are 114 hydrogen filling stations across the nation, and more FCVs are being launched, Tan Tianwei, an academician at the Chinese Academy of Engineering and also president of the Beijing University of Chemical Technology, was quoted as saying by ThePaper.cn.

Hydrogen energy, in which chemical reactions emit zero carbon, is a high priority among advanced nations around the world. The industry is expected to create 30 million jobs by 2050, cut total global carbon dioxide emissions by 6 billion metric tons, and allow up to 18 percent of the world's energy consumption to be hydrogen based, Tan said.