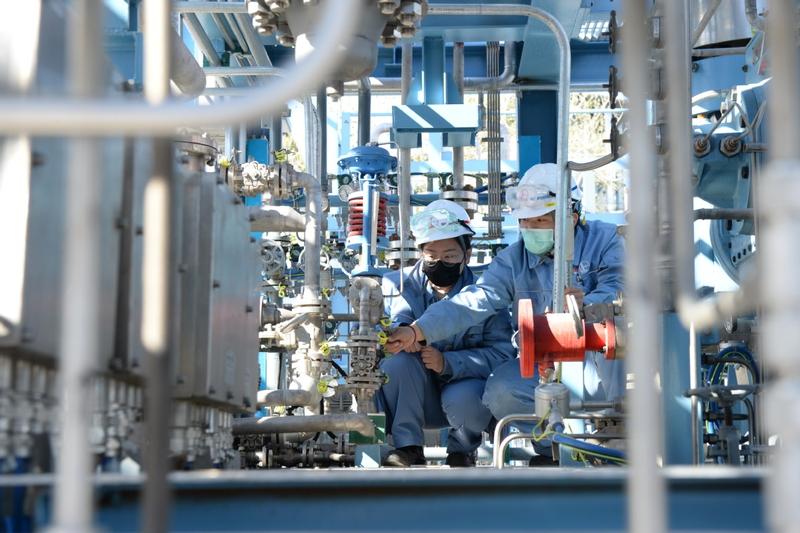 Hydrogen is likely to play a more important role in cutting emissions in sectors including steelmaking, heavy-duty trucking, shipping and cement production in China, and the country's massive demand for decarbonization technologies is expected to drive large-scale deployments that will help cut costs around the world, insiders said.

China will become an important market for hydrogen, which is expected to become a key pillar of decarbonization strategies in the country, according to BloombergNEF.

"China's recently announced carbon neutrality pledge is urging major emitting sectors such as power, transport and industry to take serious action and thus we expect hydrogen will play a valuable role decarbonizing long-haul, heavy-payload trucks, which could be cheaper to run using hydrogen fuel cells than diesel engines, by 2031," said Mi Siyi, an analyst with BloombergNEF.

"However, the bulk of the car, bus and light-truck market sets to adopt battery-powered drivetrains, which are a cheaper solution than fuel cells," Mi said.

Wood Mackenzie also declared the 2020s the decade of hydrogen, despite the unprecedented disruption due to COVID-19, as low-carbon hydrogen has been a major component of many governments' post-COVID-19 recovery plans and their long-term climate strategies.

Mi said the fuel-cell vehicle industry will also be the most expensive sector to scale up, requiring hundreds of billions of dollars in subsidies globally.

Despite the challenges and difficulties, the Chinese government is determined to press ahead.

According to the New Energy Vehicle Industry Development Plan (2021-35) released by China's State Council－the country's Cabinet－in early November, the country will focus on building up the fuel-cell supply chain and developing hydrogen-powered trucks and buses as Beijing pledges to hit peak emissions before 2030 and achieve carbon neutrality by 2060.

China also plans to have 1 million hydrogen fuel-cell vehicles on the road by 2030, with at least 1,000 hydrogen refueling stations, according to an energy vehicle development plan drafted by the Ministry of Industry and Information Technology. While only less than 3,000 such cars were sold in the country in 2019, analysts believe the economics will improve as the supply of hydrogen generated by solar and wind power grows.

Support for fuel cell vehicles in the 15-year plan for NEVs is limited compared to battery-powered vehicles. This suggests that at the national level, policymakers are still deliberating over the role of hydrogen in China's energy economy and the country's goal of carbon neutrality by 2060, Mi said, adding that she expects hydrogen to play a more important role in some sectors like steelmaking and heavy-duty trucking that are more difficult to decarbonize.

Joseph Jacobelli, an independent energy analyst and executive vice-president for Asia business at Cenfura Ltd, said he believes China is a major driver in the global development of hydrogen, thanks to the country's extraordinary energy needs, massive energy mix shift toward low carbon energy supply, strong will to decarbonize and green hydrogen's energy storage capability.

Similar to Australia's and the EU's publicly declared ambitions, it is certain China also wants to become a green hydrogen superpower.

Hydrogen at the moment is mainly produced industrially from natural gas and generates significant carbon emissions known as "gray "hydrogen. "Blue" hydrogen has its carbon emissions captured and stored, or reused, while "green "hydrogen is generated by renewable energy sources without producing any carbon emissions.

"Similar to Australia's and the EU's publicly declared ambitions, it is certain China also wants to become a green hydrogen superpower. Importantly, the size of the country's requirements and ambition mean that it will be key to drive down costs, the same way it drove down costs of solar and wind generation," Jacobelli said. 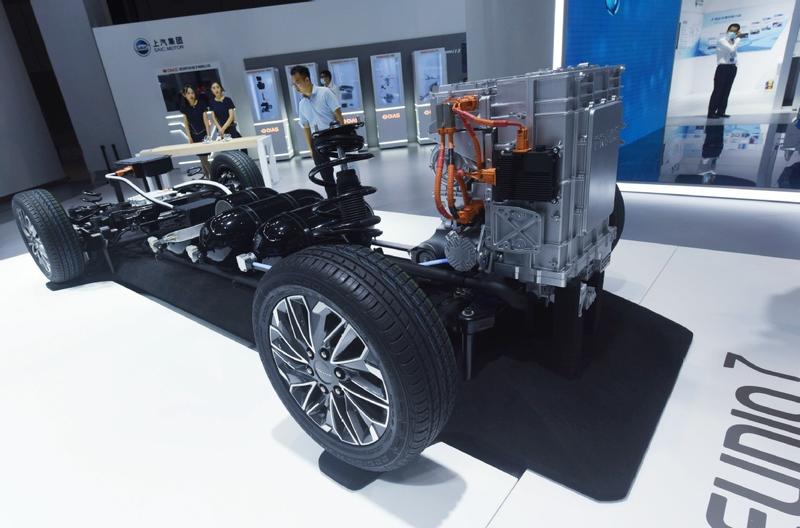 A visitor admires a SAIC Motor MPV automobile powered by hydrogen fuel battery at an industry event in Shanghai on Sept 15. (LONG WEI / FOR CHINA DAILY)

Jacobelli said it will take at least five to 10 years for green hydrogen to become economically competitive in China.

According to Mi, there are two main drivers for a dramatic drop in hydrogen prices－rapid declines in the cost of producing hydrogen from splitting water using renewable electricity in an electrolyzer and scaling-up the overall sector.

"Hydrogen production technology is expensive. But costs have fallen 40 percent in the past five years, and with costs of wind and solar continuing to fall, the question is whether the cost for electrolyzers and renewable hydrogen can follow," she said.

According to IHS Markit, green hydrogen production costs are down 40 percent since 2015 and are expected to fall by a further 40 percent through 2025.

"By 2030, IHS Markit expects that green hydrogen costs could drop below $2/kilogram. This cost is the Holy Grail for electrolysis as this is where green hydrogen starts becoming competitive with traditional hydrogen," said Soufien Taamallah, director of energy technologies and hydrogen at IHS Markit.

Many companies, domestic and foreign alike, are all actively laying out their hydrogen plans, believing the cleaner fuel will become a vital sector in the long run.

Global energy giant Royal Dutch Shell is also betting big on China's hydrogen development while further involving itself in the country's hydrogen projects after it unveiled its first commercial hydrogen project in China in November, which includes a 20-megawatt electrolyzer that will produce hydrogen and supply refueling stations in Zhangjiakou, one of the co-hosts of the Beijing 2022 Winter Olympics.

According to Huibert Vigeveno, the company's downstream sector director, Shell sees more potential in the hydrogen industry in China and will support the country in developing hydrogen over the long term.

Only hydrogen can meet demand from heavy-haul transportation over the long run, although the midterm resolution is still LNG, Vigeveno said.

Hydrogen production has the potential to become a whole new sector of electricity demand.

Vigeveno said Royal Dutch Shell has more than 50 hydrogen refueling stations worldwide in countries including Germany, the Netherlands and Great Britain, and could apply its experiences in China.

According to IHS Markit, annual global investment in green hydrogen production－or hydrogen production powered by renewable sources－is set to exceed US$1 billion by 2023, which is due to falling costs and policy support from governments looking to shift toward low carbon economies.

"Investment in electrolysis is booming around the world," said Catherine Robinson, executive director of hydrogen and renewable gas at IHS Markit.

"The pipeline through 2030 is for over 23 gigawatts of capacity to be developed－more than 280 times the current capacity. The increasing interest has been driven by falling electrolysis and renewable power costs and by increasing government focus on green hydrogen," Robinson said. "Hydrogen production has the potential to become a whole new sector of electricity demand," said Frederick Ritter, senior research analyst for global gas at IHS Markit.

"Large scale development of renewable energy will be required to support it, particularly in regions with high quality renewable resources," Ritter said.