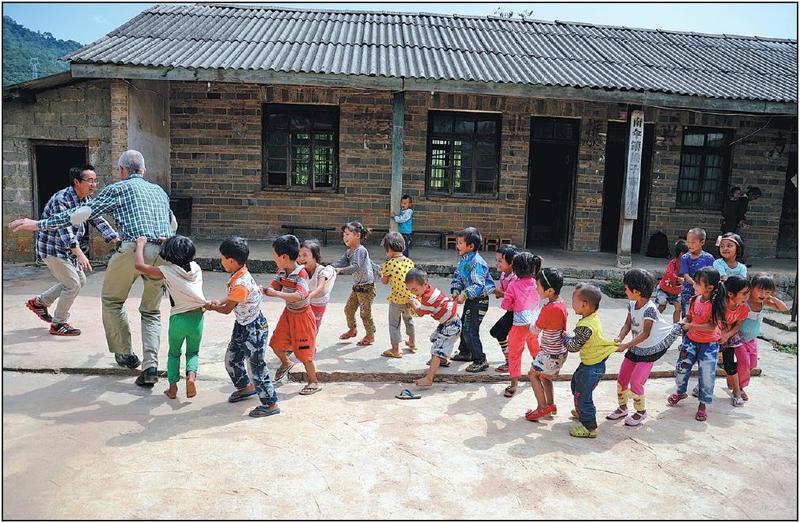 Michael Hermann, a humanitarian worker from Germany, has been a contributor and witness to the transformations in the country’s rural areas over the past few decades. During his visits to the far-flung regions, he is actively involved with local lives, such as playing games with children and talking with villagers. (PHOTO PROVIDED TO CHINA DAILY)

More than three decades ago, Michael Hermann, a language student from Germany, cycled across China's countryside, relying on the goodwill of poor but hospitable farmers. That engagement later morphed into a longtime career.

Over the past 16 years, the 64-year-old has worked in far-flung communities in Yunnan and Sichuan provinces and Chongqing to help curb HIV/AIDS, support village development and bolster children's early development.

"We do not 'fight poverty', since it is an abstract phenomenon," says Hermann, chief representative of the Federation of Associations connected to the International Humana People to People Movement Representative Offices.

"But rather, we 'fight alongside the poor'."

The humanitarian worker, who speaks Chinese, English, Spanish and Danish, and has worked in more than 35 countries and regions, is a contributor and witness to the great transformations unfolding in China's rural areas in recent decades.

The drive led by the Communist Party of China, which celebrates its centenary this year, has narrowed the urban-rural gap by expanding rural infrastructure, fostering industries, curbing rural school dropout rates, and broadening healthcare coverage for millions of farmers.

Born in a doctors' family, Hermann chose not to attend university and traveled in less-developed or war-ravaged regions, offering voluntary services in France, the Middle East and South America. He worked as a truck driver, steelworker and salesman at intervals to fund his volunteer dream.

Funded by a Danish research body, Hermann arrived in China in 1987 for a two-year language program at Fudan University in Shanghai.

Back then, the Party redoubled efforts to curb rural poverty after the "cultural revolution" (1966-76) had ended. The populous and largely rural country was different compared to the world's second-largest economy that it is today.

Rush-hour streets swarmed with millions of bicycles, with few cars and high-rises in sight. Modern services, such as international phones or telex, were scarce even in developed cities such as Shanghai. Malnourishment was widespread, especially in rural areas, and Hermann, who is 184 centimeters tall, felt like a giant when traveling, he recalls.

"On buses, I was one head higher than all others," he says.

In 1988, he had a taste of genuine rural life in China. He spent a week of his winter break at a classmate's home village in Jiangsu province. The mud houses, makeshift toilets-typical rural features then-mesmerized Hermann, alongside the hospitality of his hosts and neighbors. The experience made him take a longer lone trip a few months later.

On a Flying Pigeon bicycle, he rode 1,100 kilometers westward to Wuhan, Hubei province, during his summer break. He then took a boat to Nanjing, capital of Jiangsu, which is 350 km north of Shanghai, and eventually returned to the Fudan campus. During the three-week tour, Hermann stayed in State-owned hotels or in village committee rooms when no hotels were available, a common occurrence at that time.

"People always helped me find a place to sleep," he says.

The trip allowed him to talk with farmers about their crops, income, education and dreams. He was invited to homes adorned with simple furniture, farming tools, storage tanks filled with popular staples such as corn, rice and potatoes, and portraits of Chairman Mao Zedong.

"I just remember how friendly people were," Hermann says. "All the rice fields and all the villages were simple, clean and modest. There was very little traffic, and very quiet after sunset."

Behind the idyllic landscape, rural poverty was dragging the nation's development. In 1978, when the reform and opening-up policy was launched, China had more than 800 million people living on less than US$1.9 a day, the international poverty line. 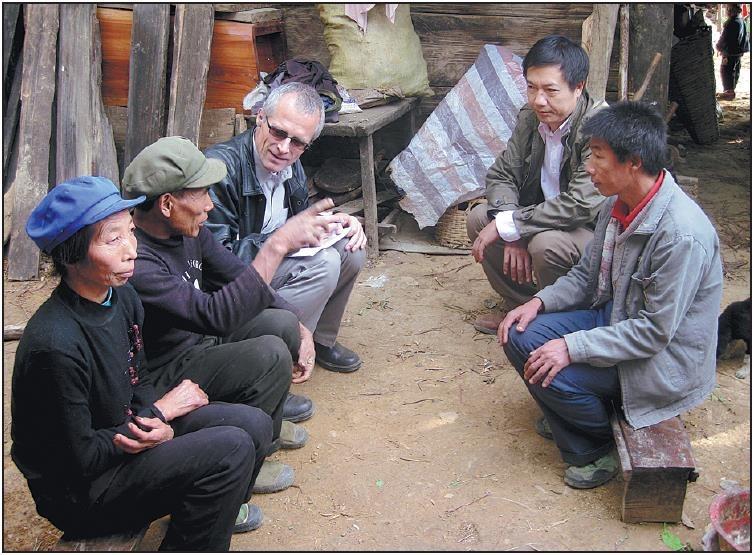 Michael Hermann, a humanitarian worker from Germany, has been a contributor and witness to the transformations in the country’s rural areas over the past few decades. During his visits to the far-flung regions, he is actively involved with local lives, such as playing games with children and talking with villagers. (PHOTO PROVIDED TO CHINA DAILY)

After the language program concluded, Hermann left China and worked as an accountant in a number of countries. He joined HPP in 1999 and provided humanitarian services in Zimbabwe and India.

He returned to China in 2005 as HPP's China representative and teamed up with authorities in Southwest China's Yunnan province to navigate some of the country's most entrenched poverty. After 10 years of absence, he found China beyond his recognition when he arrived in the provincial capital, Kunming.

"All was clean. Taxis only stopped where they were allowed to," he says.

But he was quick to notice that the economic boom following China's joining the World Trade Organization in 2001 had only trickled into the countryside.

At the time, China had stopped showering the poor with State benefits. In 1994, China embraced development programs, such as fostering local industries, upgrading rural infrastructure and helping farmers land urban jobs, but the progress remained slow.

While visiting the Lincang Lahu autonomous prefecture, a stronghold of his projects, he saw a four-lane boulevard stop abruptly, only to be replaced by a mud road linking rural parts of the prefecture.

For Hermann, the distribution of government funds resembled a pyramid-resources first went to top cities, then to smaller cities, counties, townships and finally to villages.

He also helped to raise public awareness of HIV/AIDS in rural Lincang. In 2007, HPP China hired 60"field officers" to pay visits to farmers' homes, as part of a broader effort to help educate farmers, overcome stigma of infection, and bolster acceptance of testing and treatments.

"Activities including HIV prevention and control projects had helped complement the efforts of local health authorities," he says.

Hermann and his colleagues handed out condoms and promoted protected sex. They also introduced home-testing in 2009, which bolstered testing rates. That year, then Vice-Minister of Health Wang Longde inspected the project and praised their contribution in local media.

The program later prompted the provincial government to deploy 10,000 volunteers for HIV/AIDS work.

By end of 2017, testing sites had been created in all the province's townships and more than 1,000 villages. The rate of detection reached 80.2 percent, up from just 58 percent in 2010, official data shows.

As the HIV/AIDS project was gaining ground, HPP China launched another program in the prefecture's Zhenkang county, a border region home to 170,000 residents, to bolster children's early development.

A survey by HPP China found that large numbers of preschool children in rural areas were vulnerable to negligence in the care of aging grandparents or other relatives, with their parents working away from home. There are few bedtime stories or parent-child interactions, or interactions of any kind.

To address the woes, Hermann and his colleagues turned deserted schools and farmhouses into classrooms.

And, local villagers with basic education work as teachers whose salaries are shared among parents. Children aged 3 to 6 enroll to play games, sing nursery rhymes and share stories.

Over the past decade, the program has spawned nearly 500 makeshift kindergartens in Yunnan and Sichuan, offering company to 27,000 children, mostly those whose parents work elsewhere.

In February, China announced the eradication of absolute poverty. The focus has shifted from poverty alleviation to rural vitalization, a national strategy that is expected to last until 2035 and beyond.

The most important intervention would be to develop a national system for nurturing infants in rural areas, he says, adding research has shown that rural children are already disadvantaged when they enter primary school.

"Their EQ (emotional quotient) and IQ are often half or two-thirds of their urban counterparts," he says.

The past 16 years have made China Hermann's second homeland. He plans to apply for permanent residency in China to continue HPP projects.