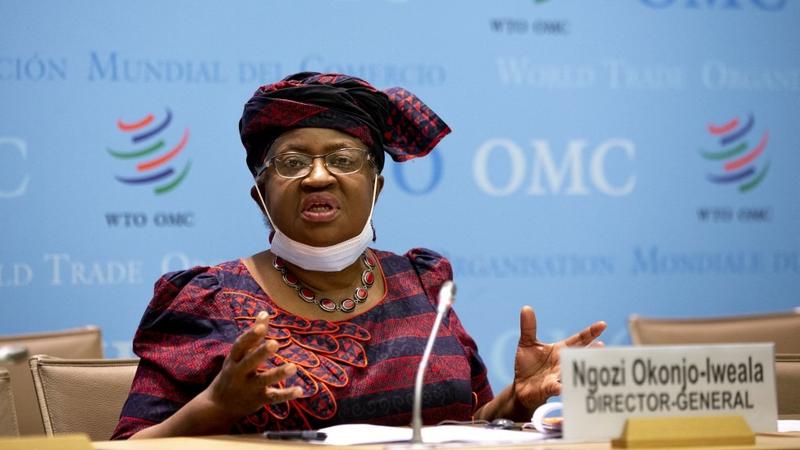 GENEVA  / RIO DE JANEIRO / BUENOS AIRES / KYIV - The head of the World Trade Organization said on Monday that trade barriers related to medical supplies used against COVID-19 had risen and urged member states to drop them, as it intensified efforts to reach a deal on vaccine-sharing.

"The trend is going in the wrong direction," WTO Director General Ngozi Okonjo-Iweala told a virtual UN forum, referring to barriers on goods trade related to the pandemic.

"We need to bring those restrictions down so we can move...medical goods and supplies and vaccines (faster)."

She said the number of trade restrictions was 109 at the start of the pandemic early last year, and had later fallen to 51 but had since risen again to 53.

At the same event, she called on WTO members to reach a deal by July on improving access to COVID-19 vaccines after months of talks on waiving drug firms' intellectual property rights. Most developing countries support the waiver but several wealthy countries remain strongly opposed, saying it will deter research that allowed COVID-19 vaccines to be produced so quickly.

"It's going to be tough because there are still differences but we hope we can get to a pragmatic approach," Okonjo-Iweala said.

"I'm in a hurry and I want us to get some agreement by July because lives are important."

The former Nigerian finance minister also commented on a WTO ministerial conference next month that will aim to strike a deal on cutting fisheries subsidies, saying she still saw "serious differences" between countries.

Ukraine registered on Monday the lowest daily number of new COVID-19 infections over the past 24 hours for nearly a year, health ministry data showed.

The number of recorded new infections usually dips on Mondays due to fewer registrations over the weekend.

Ukraine, which has a population of 41 million, has been among the most affected European countries so far, with around 2.22 million COVID-19 cases and 51,692 deaths as of June 14.

The data showed Ukraine had registered a record low 13 deaths in the past day.

Leaders of G7 countries have agreed in an agreement at their summit to share at least 870 million doses of COVID-19 vaccines directly, at least half of which are to be delivered by the end of 2021, the World Health Organization (WHO) said on Sunday.

In a statement, WHO said the G7 countries have reaffirmed their support for COVAX, a WHO-led international campaign for equitable access to COVID-19 vaccines globally, as "the primary route for providing vaccines to the poorest countries."

While welcoming the G7's commitment, COVAX partners have also called for their continued support for exporting the vaccines in significant proportions, promotion of voluntary licensing and not-for-profit global production.

COVAX has been facing an urgent supply gap, according to the WHO, and is focused on securing as many shared doses as possible immediately. It will work with the G7 and other countries that have stepped up to share doses as rapidly and equitably as possible, to address short-term supply constraints and minimize the prospect of future deadly variants.

Workers load boxes of the Oxford-AstraZeneca COVID-19 vaccines, provided through the COVAX program, into a truck after they arrived by plane at the Ivato International Airport in Antananarivo, Madagascar, on May 8, 2021. (MAMYRAEL / AFP)

"Many other countries are now facing a surge in cases -- and they are facing it without vaccines. We are in the race of our lives, but it's not a fair race, and most countries have barely left the starting line," said WHO Director-General Tedros Adhanom Ghebreyesus. "But we need more, and we need them faster," he added.

"This is an important moment of global solidarity and a critical milestone in the push to ensure those most at risk, everywhere are protected," said Seth Berkley, CEO of Gavi, the Vaccine Alliance.

"As we strive towards our goal of ending the acute phase of the pandemic, we look forward to working with countries to ensure these doses pledged are quickly turned into doses delivered," he added.

The G7 has committed one billion doses since the February 2021 virtual G7 Early Leaders' Summit, including pledges made at the G20 Global Health Summit and the Gavi COVAX Summit.

British Prime Minister Boris Johnson is expected to announce on Monday that the end of COVID-19 restrictions will be delayed following concern about the rapid rise of infections of the Delta variant of the coronavirus.

Under a roadmap outlined by Johnson back in February, the government signaled all social restrictions imposed to control the spread of the disease would be lifted "no earlier" than June 21, when pubs, clubs and other hospitality venues could fully reopen.

But, in recent weeks there has been a fast growth again in the number of new cases caused by the Delta variant, first discovered in India, which health officials believe to be 60% more transmissible than the previous dominant strain and scientists warn could trigger a third wave of infections.

Johnson has refused to deny suggestions in the British media that the end of lockdown would be delayed by up to a month, saying in recent days there was “serious concern” about rising infections and hospitalizations.

The UK reported more than 7,000 new cases on Sunday for a fifth day as a surge in infections linked to the delta virus variant is complicating Prime Minister Boris Johnson’s decision on whether to go ahead with his plan to lift England’s remaining lockdown restrictions on June 21. There were 7.490 new cases reported on Sunday, more than twice the daily rate a month earlier.

Johnson is due to announce his decision Monday and said on Saturday the jump in cases is leaving him “less hopeful” about dropping the remaining lockdown rules. One of the world’s best vaccine rollouts has helped limit the impact of the case surge, with just eight new deaths reported on Sunday.

Cuba on Saturday reported the highest number of cases of COVID-19 in the last four weeks, with 1,372 infections and 10 deaths recorded.

The Cuban Ministry of Public Health stated that these new figures bring the total number of infections to 156,238 and the death toll to 1,075.

Havana has the highest incidence rate in the country, with 310.7 cases per 100,000 inhabitants.

An emergency vaccination campaign with vaccine candidate Abdala is taking place in seven Havana municipalities and will be expanded to include the entire capital on Monday, with the aim of vaccinating all of the city's 2.2 million residents by the end of July.

The vaccination campaign is also being carried out in the provinces of Pinar del Rio, Matanzas, Santiago de Cuba, and the Special Municipality of Isla de la Juventud.

Brazil registered 1,129 more deaths from COVID-19 in the past 24 hours, bringing the nationwide tally to 487,401, the health ministry said Sunday.

The South American country, which is experiencing a new wave of infections with hospitals overwhelmed by patients, has a mortality of 231.9 deaths per 100,000 inhabitants, said the ministry.

In its daily report, the country's health ministry also reported that 3,721,350 people have recovered from the disease, while 317,497 remain in the active stage.

Meanwhile, 16,360,449 vaccine doses against COVID-19 have been administered in the South American country to date.

So far 3,334,761 people have received two doses of vaccines, while 13,025,688 have received the first dose, according to the public vaccination monitor.

The ministry added that another 128 deaths were also registered, bringing the death toll to 30,707.

Chilean Minister of Health Enrique Paris said that in the last 24 hours, COVID-19 test positivity had reached 8.32 percent at the national level, while in the Santiago Metropolitan Region, test positivity rate was 9 percent.

In the Santiago Metropolitan Region, where more than 7 million people live, a total lockdown came into force on Saturday due to the increasing number of cases.

“With falling incidence rates, we should proceed in stages,” Funke Media Group quoted Spahn as saying in an interview. “As a first step, compulsory masks can be dropped outside.”

Face masks will remain recommended “when in doubt,” for instance when traveling or meeting indoors, he said.

Daily deaths in Germany attributed to COVID-19 declined to 18, the Robert Koch Institute health agency said on its website Sunday, the fewest since October.

South Africa will dispose of 2 million Johnson & Johnson vaccines following a U.S. ruling that ingredients for the country’s doses may have been contaminated during production in a plant in Baltimore, according to President Cyril Ramaphosa.

The news marks a major setback in the country’s vaccine rollout just as a third wave of infections is gathering pace. However, Aspen Pharmacare Holdings, Africa largest drugmaker, is set to begin the production of new J&J vaccines by mid-week, Ramaphosa told reporters Sunday.

The US is approaching 600,000 deaths from COVID-19, even as new fatalities, infections and hospitalizations continue to plummet nationwide. The vaccination drive has slowed significantly but the results are clear: Masks are disappearing, the country is largely reopening. And daily deaths have fallen from a peak of more than 5,000 in February to an average of about 300 over the last week.

The US added 19,675 new cases on Saturday, the most since June 2, according to data compiled by Johns Hopkins University and Bloomberg. While the number represents an almost 6% increase in the rolling seven-day average of US cases, it’s too early to determine a sustained trend.

Another 484 deaths linked to COVID-19 were recorded on Saturday, pushing the U.S. death toll in the pandemic to within a few hundred of 600,000.

Americans are becoming increasingly comfortable gathering with friends, going to workplaces, getting on planes, and attending large events, according to a CBS News survey conducted by YouGov.

In early June, 45 percent of respondents said they would be comfortable going to a large event, compared to only 27 percent who said the same in March. The majority of of those now expressing such comfort, however, aren’t actually vaccinated. Of those who now say they would be comfortable venturing to a large event, about 6 in 10 said they “won’t get vaccinated,” the poll shows. Political partisanship remains a driving factor in that resistance, according to CBS.

The Moscow government is trying to motivate people to get vaccinated by holding a car raffle. From June 14 to July 11, residents getting their first Covid-19 shot will be entered in the lottery.

The offer comes after Mayor Sergei Sobyanin ordered the return of sweeping restrictions in an attempt to curb a spike in infections and said authorities are making thousands of hospital beds available. Nationwide, there were 14,723 new cases of infection confirmed, with 357 deaths.

Separately, the Moscow regional government will hold a lottery to win an apartment for anyone getting vaccinated in the next two weeks, Interfax reported. The three-room flat is in Serpukhov, south of the capital.