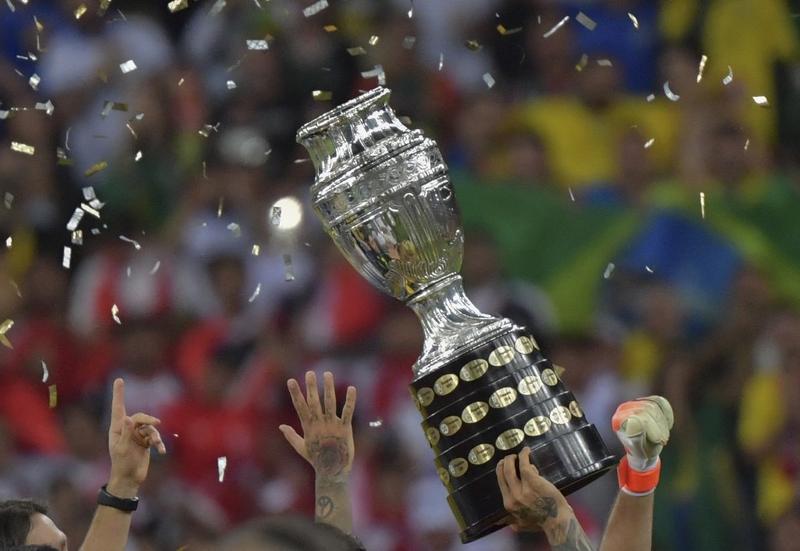 In this July 07, 2019 photo, Brazil's players raise the trophy after winning the Copa America by defeating Peru in the final match of the football tournament at Maracana Stadium in Rio de Janeiro, Brazil. (LUIS ACOSTA / AFP)

ASUNCION - The Copa America will take place in Brazil next month, the South American Football Confederation (CONMEBOL) said on Monday, although President Jair Bolsonaro’s chief of staff said ongoing talks might not reach a formal conclusion until the next day.

The surprise announcement, which would mean relocating the competition from one South American coronavirus hotspot to another, means the world’s oldest international tournament could kick off as planned on June 13, with the final on July 10.

Vice President Hamilton Mourao acknowledged the move in comments to Brazilian media, saying that if there was no audience present, there should be no issue with the pandemic.

Later on Monday, Luiz Eduardo Ramos, Bolsonaro’s chief of staff, said negotiations were underway and that there was “nothing certain” about the tournament’s potential relocation.

The tournament is set to feature many of the greatest players in the soccer world, with Argentines Lionel Messi and Sergio Aguero, Brazilian Neymar and Uruguay’s Luis Suarez among those expected to participate. CONMEBOL has promised all players will be vaccinated before the tournament begins.

“The Brazilian government has shown agility and decisive thinking at a crucial moment for South American football,” CONMEBOL president Alejandro Dominguez said in a statement.

“Brazil is in a time of stability, it has proven infrastructure and recent experience in hosting a tournament of this magnitude,” he added.

The decision is a boost for Bolsonaro, a far-right former army captain who has railed against lockdowns and urged Brazilians to return to normal life.

In a separate tweet, CONMEBOL thanked Bolsonaro for “opening the country’s doors to what is now the safest sporting event in the world.”

The president’s office directed questions to the sport department at the Ministry of Citizenship, which did not respond to a request for comment.

More than 460,000 people have died from COVID-19 in Brazil, second only behind the United States, and the vaccination rollout has sputtered.

But Argentina is struggling with a recent COVID-19 spike. According to a Reuters tally, Brazil has reported 204 coronavirus infections per 100,000 people in the last seven days, compared to 484 per 100,000 in Argentina.

Large demonstrations took place across Brazil on Saturday to protest Bolsonaro’s handling of the pandemic.

Huge protests also shook Brazil during the 2013 Confederations Cup, but Vice President Hamilton Mourao told reporters in Brasilia he did not expect more demonstrations during the Copa America. Brazil is a “less risky” choice than Argentina, he said, especially without fans.

But many others in Brazil, where soccer is a national obsession, were outraged by the decision.

Renan Calheiros, the senator leading the upper house’s inquiry into the government’s handling of the pandemic, dubbed the tournament the “championship of death” and lambasted Bolsonaro’s tardiness in buying vaccines.

“Vaccine offers went moldy in drawers but the OK for the tournament was rapid,” he wrote in a tweet.

This year’s Copa America was to be the first featuring joint hosts, but Colombia was removed as co-host on May 20 after a wave of protests demanding social and economic change spread across the country.

CONMEBOL hoped Argentina could then host all 28 games or share them with South American neighbors.

Organizers had been reluctant to cancel the lucrative tournament. The last Copa America, held in Brazil in 2019, brought in US$118 million in revenue.

Although no decision has yet been made on venues, many of the stadiums Brazil built or improved for the 2014 World Cup could be candidates to host matches, with the Maracana stadium in Rio de Janeiro or the Mane Garrincha stadium in the capital Brasilia possible locations.

One source told Reuters that venues in Brasilia, Natal, Manaus and Cuiaba will be used. CONMEBOL said it would reveal the host cities “in the coming hours.”

The last-minute decision also throws up some complicated logistics for the Brazilian national federation (CBF). The Brazilian league was not due to be halted during the Copa America and at least 70 league games are scheduled to be played during the month-long tournament.

News reports in Brazil said CBF will be asked to suspend the league for the duration of the Copa.