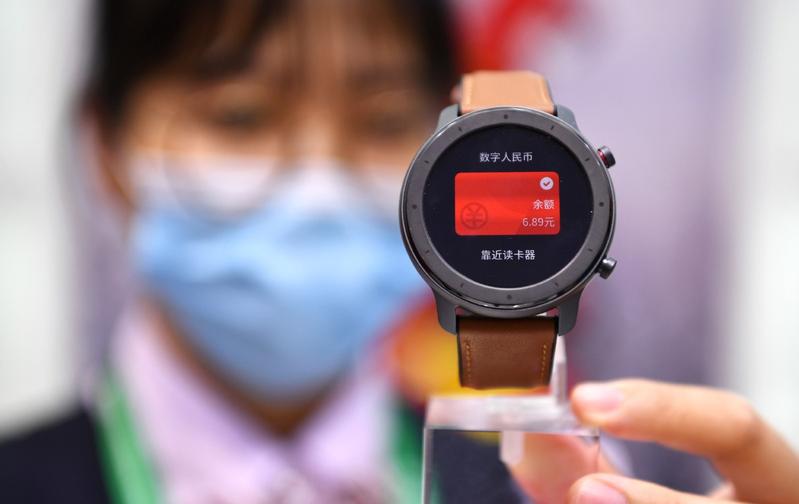 This photo shows a payment terminal for digital RMB is exhibited at the China International Consumer Products Expo in Haikou, Hainan province, on May 8, 2021. (PHOTO / XINHUA)

China's digital RMB trial has for the first time included a privately owned bank, indicating a further expansion of applications and the country's firm attitude in driving the pilot program, analysts said.

Zhejiang E-Commerce Bank Co Ltd, which is based in Hangzhou, Zhejiang province, became the seventh bank in China to offer the testing of central bank digital currency, or e-CNY. Users can now download a digital wallet through a designated app.

Since Zhejiang E-Commerce Bank has advantages in e-commerce, mobile payment and fintech services, it will facilitate the expansion of the testing and the broader usage of digital RMB, said Liu Bin, director of the Shanghai Pudong Reform and Development Research Institute's finance research office

The Ant Group, e-commerce giant Alibaba's financial technology arm, has the largest share in the bank, at 30 percent, and owns the third-party payment platform Alipay.

The inclusion of the privately owned bank marks a new step in the e-CNY trial, said analysts, and the tested scenarios are continually increasing.

Since Zhejiang E-Commerce Bank has advantages in e-commerce, mobile payment and fintech services, it will facilitate the expansion of the testing and the broader usage of digital RMB, said Liu Bin, director of the Shanghai Pudong Reform and Development Research Institute's finance research office.

At the annual conference in April of the Boao Forum for Asia, Li Bo, vice-governor of the People's Bank of China, the central bank, said the authorities are planning to expand trials of the digital yuan, or e-CNY, in more cities and for various scenarios.

"For example, in the pilot program for the 2022 Beijing Winter Olympics, the digital yuan will not only be offered to domestic users, but also to international users," Li said.

Another signal of the trial's expansion recently is that e-CNY digital wallets offered by these six banks have added applications to pay digital currency to e-commerce platforms such as food delivery service Ele.me.

Some experts said the expansion of the digital RMB's payment system will help connect different internet platforms, including other mobile payment providers such as WeChat Pay.

According to a research note from Huaxi Securities, until the end of this year, the e-CNY testing program is expected to speed up, focusing on expanding the scale of users and application scenarios.

The final launch of the digital RMB may change the existing market structure, which is mainly dominated by Alipay and WeChat Pay, and the banks may return to a leading position in the digital currency system, the research indicated.

Large e-commerce platforms' business will likely combine with the e-CNY's cross-border usage and attract global users, according to Liu.

China is seeking ways to exchange various digital currencies issued by the world's leading central banks, which is a complicated issue. PBOC Vice-Governor Li Bo said China is not in a hurry to find a solution.

"We are choosing different options to experiment with various technologies. We are open-minded. The goal is to build a very solid domestic digital yuan and a healthy ecosystem," Li said.