E-CNY signals digitalization to 'connect everything'

By Cheng Shi and Gao Xinhong 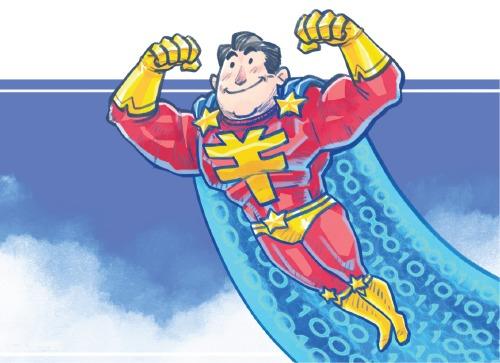 The 2021 Government Work Report mentioned the word "digital" 10 times, which is unprecedented. It means that building a "digital China" has become an important goal of the country's long-term plan for economic development.

In order to create new advantages in the digitalized economy, China needs not only to focus on the improvement of digital productivity, but also to promote the overall evolution of production relations. In this context, the innovation of the currency system is the starting point for a series of changes.

Since the implementation of the first pilot application scenario of the digital renminbi, or e-CNY, in April 2020, the speed and breadth of the promotion have greatly exceeded the market expectation, and a total of 150 million yuan (US$23 million) of e-CNY has been distributed to the public.

We believe that so far the development of e-CNY has been in a "sprint stage", and it will accelerate the construction of a digitalized China.

The e-CNY has become a hot word at the two sessions this year, and has been included in the targets of many local governments' annual tasks.

The tests relating to the 2022 Beijing Winter Olympics scenes were laid out in advance in February, and to some extent, the "closed-loop test" so far has met the requirements set before, and the official launch of the digital currency may be coming soon.

For storing the e-CNY, safety and portability are the primary elements to consider. The physical form of e-CNY will be as simple and pragmatic as possible, and it will be promoted at full speed in a direction that is in line with China's rational development of the financial sector.

The visual card, wearable device, and digital wallet with chips, may only be used as supplements for specific scenarios.

Recently, the Digital Research Institute of the People's Bank of China, the central bank, has accelerated the development of the enterprise application of e-CNY. It is based on China's first autonomous and controllable blockchain software and hardware technology system called "Chang'an Chain".

The system shows that the functions of the digital RMB will not only replace M0－the cash in circulation－but also aim to serve the mutual-trust payment and improve the environment of enterprises.

Looking forward, the full range of traceability of the e-CNY is coupled with the blockchain technology, and its programmability expands the space for applications of digital technologies, such as 5G and artificial intelligence, or it will reconstruct the exchange system of the global digitalized economy. It may spark a new generation of digital economy.

The test of e-CNY is paving related financial infrastructure both online and offline. In April 2020, China's first application scenario of the e-CNY debuted in Suzhou, Jiangsu province and it was distributed to employees of district-level government agencies, institutions and directly affiliated enterprises in Xiangcheng district in the form of transportation subsidies.

After six years of research and development, the e-CNY finally entered the stage of promotion to residents.

Since the first pilot program of the e-CNY digital red packets in Shenzhen's Luohu district, Guangdong, in October 2020, the central bank has distributed 150 million yuan in all in red packets in Beijing, Suzhou, Chengdu in Sichuan province, Shenzhen's Futian and Longhua districts.

We believe that the promotion of e-CNY is a gradual and inclusive process. Not only does it promote citizens' participation during the issuance of the "red envelopes", it also considers the users' needs of the circulation of digital money.

On the one hand, the promotion of e-CNY has gradually moved from purely offline scenarios, such as gas stations and supermarkets, to the integration of online and offline.

Since the introduction of e-commerce scenarios in Suzhou, the online promotion of digital RMB has become increasingly diverse. According to the adaptability of different banks' digital wallets, it can be used in multiple internet scenarios offered by the e-commerce platforms such as Meituan, Didi, and Bilibili. The tests used different internet scenarios as the "diversion kerb" to increase users.

On the other hand, e-CNY wallets have various forms, which can be related to, but not fully relying on, smartphones and the internet. From the earliest mobile phone internal test application software to hardware wallets such as mobile phone SIM cards, visual cards, and wearable devices, e-CNY embodies the idea of "centralized issuance and market-based circulation".

It is jointly developed by the central bank and designated operating agencies, in the form of an inclusive ecosystem of wallets.

Regional cooperation can promote the formulation of rules for the global digital currency system. Compared with the steady and prudential advancement of the e-CNY domestically, which put the micro-payment service as a priority, for the external usage, the digital RMB will make bolder and more challenging attempts. It may also test the wholesale usage of the digital currency.

Recently, the PBOC Digital Research Institute issued a statement that it will jointly launch a multilateral central bank digital currency project, or the "Multiple Central Bank Digital Currency Bridge", with the Hong Kong Monetary Authority, the Bank of Thailand and the Central Bank of the United Arab Emirates.

China is exploring various possible solutions of e-CNY in the international environment with all partners, on the basis of seeking consensus

The statement said the monetary authorities will explore capabilities pertaining to distributed ledger technology by developing a proof-of-concept prototype, to facilitate real-time cross-border foreign exchange payment-versus-payment transactions in a multi-jurisdictional context and on a 24/7 basis. It will also explore cases in cross-border trade using both domestic and foreign currencies.

In the "m-CBDC Bridge" program, participants may adopt different underlying structures and technical routes, thus, on how to achieve the simultaneous settlement of cross-border payments. This will face multiple challenges like laws and regulations and various business types in addition to technical issues.

In this field, China is exploring various possible solutions of e-CNY in the international environment with all partners, on the basis of seeking consensus.

It will promote the upgrading of global financial infrastructure and actively participate in making rules of a new cross-border payment system based on central bank digital currencies.

With the disclosure of patents involved and the gradual expansion of the e-CNY pilot programs, the embryonic form of the digital RMB has emerged, and the market's understanding of it will become clear. However, compared to other types of digital currencies, such as Libra and Bitcoin, the e-CNY is an ingenious experiment.

Entering the "digital RMB era" marks the starting point of digital migration, and we should focus on new advantages and new business formats.

During the two sessions this year, many members of the National Committee of the Chinese People's Political Consultative Conference submitted related proposals on "strengthening the protection of personal information", which also means that the digital economy has moved from focusing on improving productivity to reshaping production relations.

Digital technologies, such as 5G, AI, and cloud computing, move from "connecting people" to "connecting everything", driving the entire upgrading process of digital economy.

Blockchain, which effectively makes tampering impossible, achieves a high degree of trust in the mechanism, and becomes the institutional guarantee for the overall digital migration.

Under the innovation of digital technologies, we will see the birth of a large number of original and traceable digital assets, but the traditional credit currency system does not have the digital ability of docking and exchange.

Based on that, the e-CNY came into being. Its full traceability feature is coupled with the blockchain, and its programmability expands the space for the application and superposition of digital technologies.