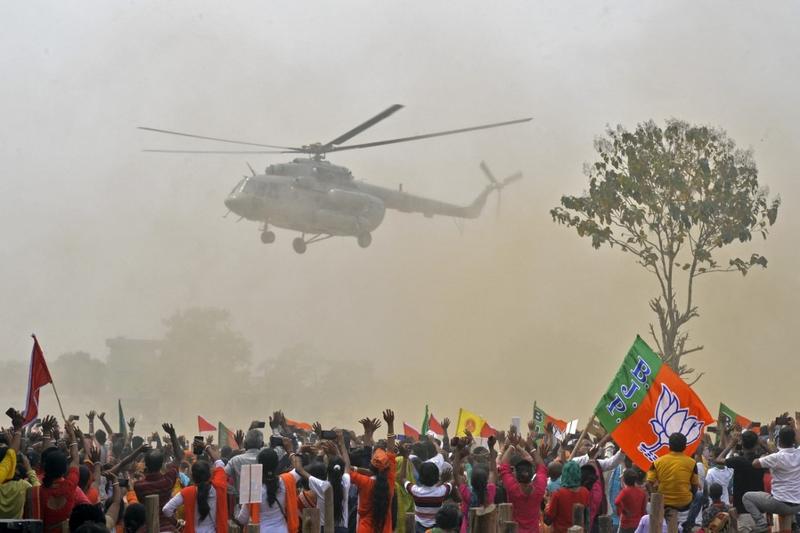 Supporters of Bharatiya Janata Party (BJP) wave towards a helicopter carrying Indian Prime Minister Narendra Modi upon his arrival at a public rally during the ongoing fourth phase of the West Bengal's state legislative assembly elections, at Kawakhali on the outskirts of Siliguri on April 10, 2021. (DIPTENDU DUTTA / AFP)

India Prime Minister Narendra Modi’s party is trailing in a key state election that is seen as a test of his popularity and an indication of whether the backlash over his government’s handling of the country’s COVID-19 emergency will hurt him at the ballot box.

In West Bengal, incumbent Chief Minister Mamata Banerjee’s All India Trinamool Congress was ahead in 137 seats, while Modi’s Bharatiya Janata Party was leading in 70, according to initial trends posted on the website of Election Commission of India. The BJP was leading in the northeastern state of Assam. In southern state of Tamil Nadu and Kerala, Modi’s opponents were ahead, while in the federally-controlled territory of Puducherry, there was no clear trend yet.

In West Bengal, incumbent Chief Minister Mamata Banerjee’s All India Trinamool Congress was ahead in 137 seats, while Modi’s Bharatiya Janata Party was leading in 70, according to initial trends posted on the website of Election Commission of India

The coronavirus pandemic has overshadowed the five assembly elections, and Modi is facing growing criticism over his decision to continue campaigning in front of huge crowds in the battleground state of West Bengal as infections were spiraling.

India’s fierce second wave has overwhelmed the nation’s underfunded health system, with infections topping 400,000 on Saturday in another global record and hospitals running out of beds, oxygen and medical supplies. The death toll continues to mount and images of crematoriums working non-stop have flooded newspapers, television and social media.

Sunday’s vote count comes a day after 12 patients including one senior doctor died when a hospital in the capital New Delhi ran out of oxygen -- the third such incident in the last 10 days -- after sending out desperate calls for help hours earlier.

“We have been raising this kind of alarm to the government, because it is an ongoing situation that is worsening everyday,” Sudhanshu Bankata, the executive director of the Batra Hospital, said by phone.

Delhi’s Chief Minister Arvind Kejriwal said Saturday his administration had told both the courts and the federal government that the state required 976 metric tonnes of oxygen per day but had only been allotted 490 metric tonnes.

“Then how are things supposed to work out?” Kejriwal said in a statement Saturday. “Delhi needs oxygen.”

The BJP used these elections to try to expand its footprint in the country’s east and south. In West Bengal it was on a war footing to try and unseat Modi’s main challenger, the regional leader Banerjee.

The biggest challenge post election will be for the main opposition Congress party, which ruled India for decades, Shastri said, given it failed to win back either Assam or Kerala. “The party would gradually lose its position as a nucleus of the anti-BJP political force and Rahul Gandhi’s role will surely come under fire,” he said, referring to the party’s former president and the son of the late Prime Minister Rajiv Gandhi.